DOES MY CHALARA LOOK BIG IN THIS? 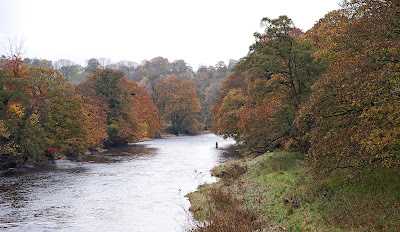 Autumn trees by the River Hodder, in Lancashire not far from Clitheroe.  Amazing what you stumble upon, when diverted from the soul-destroying M6.  The angler looked cold but seemed to be enjoying himself.  Shot on 31st. October, on a journey home from Blackpool where my brother and I had been on a mercy visit and to buy some Blackpool Rock - one of life's essentials.  (Click to make bigger.)

Good cheer to all who enter here!

I said, forget it!

There, that wasn't difficult, was it?

CORE VALUES.
Now.  What's all this nonsense about Bramley Apples?  Recently, those grown in Armagh, Northern Ireland have been being granted an EU Special Protected Designation of Origin, putting them into a similar elite group to Champagne, Parma Ham, Stilton and – heaven help us! – Cornish pasties.

If you lined up a tasting panel and served dishes of stewed Bramleys – or Bramley apple pie – made from fruit grown in Kent, Herefordshire, Lancashire and Armagh, would anyone have a clue which one comes from where?  I suspect the whole thing is a lot of flim-flam.

Parma ham - from Parma – I grant you, has unique flavour, texture and quality partly resulting from the area in which is is grown but mainly from the way the hams are cured.  If I were a Parma ham producer, in Italy, I'd resent someone from Spalding or Pamplona calling their product 'Parma' ham.  But anyone with a tastebud would know the difference at the first bite, wouldn't they? And since the origin of the product has to be declared, the customers would know where the stuff comes from and base their choice on that.

Furthermore, this special designation lark doesn't create a level playing field.  The French-based cheese company Président makes a holey cheese product which they are allowed to call 'Emmental'  It's perfectly edible but just isn't like genuine Swiss cheese – its more rubbery and has a different, blander flavour.  And it's not nearly so good in a fondue.

It's easy to see why local growers or producers would want their stuff to have a Specially Protected Designation but with most of the foods so designated, it makes not one jot of sense. 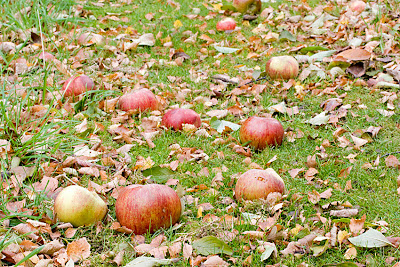 Fallen apples. One soon tires of cooked apple, I find – especially Bramleys. These ones fed the fielfares and attracted big slugs which the hedgehogs enjoyed.

And with Cornish pasties it's utterly bonkeroonies.  I've eaten excellent pasties made hundreds of miles  from Truo.  They even produce them in my local town – but are tactful enough to call them 'Bournish Pasties.

I've also experienced terrible pasties made in the heart of the Duchy.  Indeed, one that I particularly disliked, some years ago, was bought from Rick Stein's delicatessen in Padstow.  It was excessively salty and had greasy, flaky pastry.

But I'd better balance that by saying that the finest and most beautifully made Cornish Pasties, a decade or two ago, were bought from Trevone Post Office.  They were made by a small producer, I believe, and you had to order them in advance from two wonderful ladies who ran the post office in those days.  They were called Pam-the-Post and Viv-the-Victuals and were as much operators of a valuable local social service, as they were businesswomen.

Getting back to those Bramleys - perhaps a gang of gardening journalists should get together and organise an adjudicated blind tasting of the cooked apples from the provenances mentioned above. If a significant number of tasters get the identities right, and find the Armagh apples distinctive, tastier and better for cooking than the other three counties, I'll eat my hat.

Meanwhile, on a personal note, may I say that I rather dislike Bramley's anyway.  There are far better culinary varieties and for a lot of puddings  – Tarte Tatin for instance – dessert varieties are much nicer, especially those which retain their integrity after cooking.

I'm listening to Vaughan Williams' opera The Pilgrim's Progress.  We're off to see it at the London Coliseum next week, and I'm getting familiar with the music.  Pretty good, so far.  Quite a bit of 1940s Britten about parts of it.

This week's film was Antonioni's 1950s Il Grido, a story of failed relationships after an unexpected betrayal by the protagonist's partner.  It was shot in the depths of a miserable winter in the flatlands which flank the river Po.  It's dark, despairing, depressing and I loved every scene. 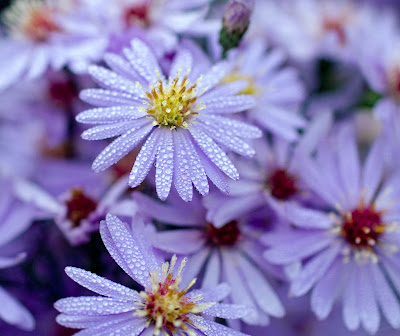 
Oh, by the way - how were your late perennials?  We had a wonderful show – though not a decent piccy to post because we were abroad for the best bits.  (I shot the above a couple of years ago.)  Asters were never better, especally Aster laevis 'Calliope' which grew 8 foot tall.  I've also fallen for the low growing, long-flowering A. asperula which produces strange stems with branches held at big angles, separating the flowers but enabling you to enjoy each in detail.  The broad foliage is pretty, too.  Apart from that, and the equally short A. thompsoniae 'Nana' I prefer my Michaelmas daisies tall.