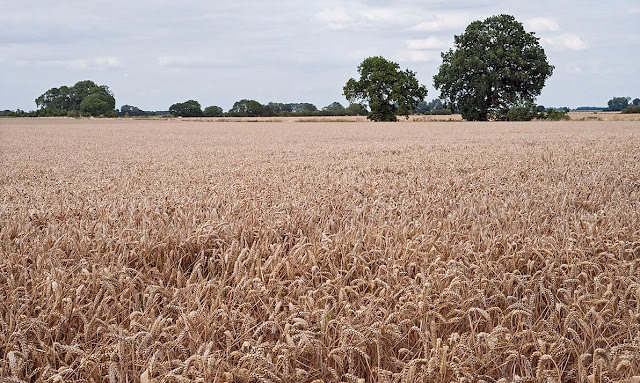 Wheat, heavy in the ear and ready for harvest on Hacconby Fen.
(click on pix for a larger view)

Now then. . .
The more observant among you will have noticed that this blog has been inactive since April.  No doubt, you'll have leafed through the back posts – for lack of anything else to see – and probably sighed with disappointment at the absence of any new material.

It has been an inexcusable neglect, caused by long-running industrial action leading to a lock-out by the SILVERTREEDAZE production team who complained that their pay of £0.00 per hour, coupled with a zero hours contract was NOT a basis on which to develop a happy working relationship.

But I'm delighted to announce that after lengthy negotiations, much beer and sandwiches and a re-shuffle, their Union Leaders have agreed to accept a 50% increase to the hourly rate with a minimum number of hours guaranteed.

As a result, this blog is to be relaunched in EARLY SEPTEMBER.

Unlike the Norwegian Blue Parrot,  it will not be dead.  It will not have ceased to be.  A phoenix-like fiery birth, from the ashes of neglect, will excite, inspire and enthuse you. 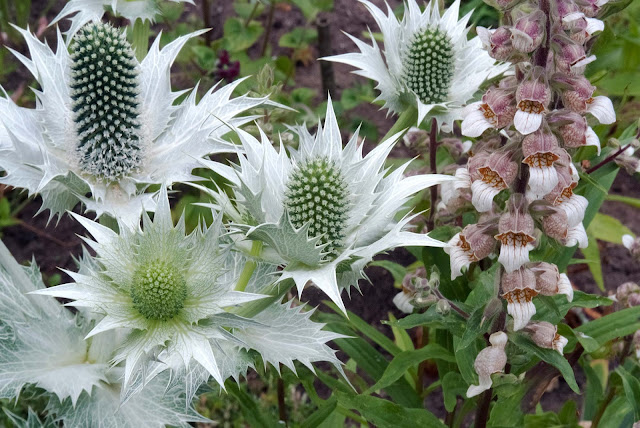 We'll post PRETTY PICTURES –  maintaining the tradition of the images being completely irrelevant, much of the time.

We will talk gardens, fads and flarze.  And we'll keep covering nature, wherever we find anything interesting. 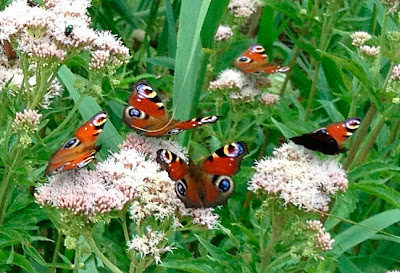 This has been a bountiful summer for butterflies.  Peacocks are flocking, in our garden and the common blues are back in the mini-meadow.  But the peacocks above hatched in Norfolk and were feasting, early in August, on wild hemp agrimony, Eupatorium cannabinum.

Hot extracts from my personal diary will appear, from time to time, as separate posts


There will be more RANTS, of course.  There is, after all, plenty to be cross about!

For instance, it was recently announced that fresh Eggs will no longer be served in the Houses of Parliament. 'Elf and Safety' have banned them from Westminster Palace's eateries, unless they have previously been removed from the shells, in a factory, pasteurised, blended into a disturbing yellowish gloop and re-packaged for caterers. That, apparently, is safer and more wholesome than nature's exquisitely sculpted ovaloids, dropped fresh, pure and seamlessly packaged from the chicken's bottom.

Those of us who are neither peers – manufactured or born – nor elected MPs, may continue to eat fresh eggs, cooked in any way we want.

The ban raises a couple of amusing questions:  If fresh eggs are unsafe, as Elf 'n' Doodah suggest, why is it fine for the rest of us to eat them?  Is it because MPs all lead pure, uncorrupted and irreproachable lives within the sanctified environs of Westminster, whereas we peasants and plebs are accustomed to wallowing around the the cack?

Either way, the ban seems to be bloody silly.  Besides, you'd think Parliament would avoid the subject of eggs altogether, after the 'Curried Egg Fiasco' of earlier, Tory years. 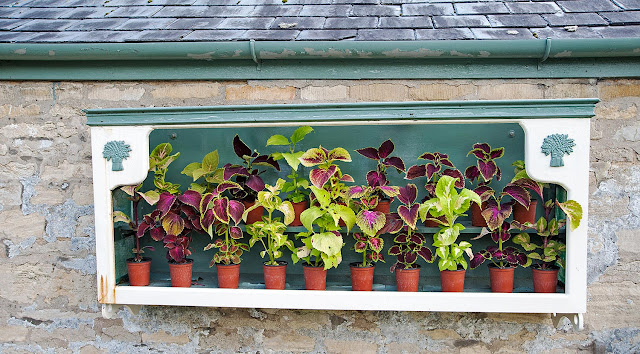 An amusing 'coleus shelf' on a wall at the magnificent Easton Walled Gardens, Lincolnshire.

Please, please, please be sweet enough to give us all at SILVERTREEDAZE another visit.  And keep on coming back.

Posts will be announced on Twitter – @plantmadnige – and your comments, rude or otherwise, will be eagerly awaited.

The  fun begins in EARLY SEPTEMBER.  Be there!