A BARROW OF LAUGHS 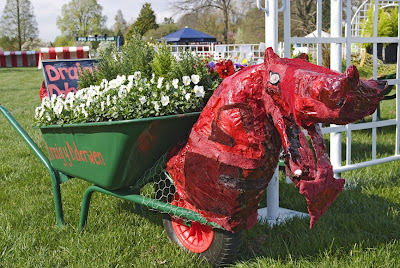 A Welsh Dragon, in the Schools Wheelbarrow Garden Contest at Cardiff Flower Show.
GOLLY GOSH!!  It's Monday again and already far too long since my  last post.  Sorry about that, and about the slightly breathless style of what you are about to read.   It's sunny, it's spring, I've just spent the day in trains, or in offices, and am I out enjoying the blissful spring evening?  No!  Why? Because I'm an idiot.  Any more questions?
Last Thursday through - or, if you must, 'thru' - Saturday we journeyed to Wales to 'do' the Cardiff Flower Show and to catch up with dear relatives.  The weather, on the journey there, was almost surreal in its awfulness.  Fog, which was a surprise, slowed us down over the midlands and then, as we approached  Bristol, a deluge of such intensity fell through the unnatural murk, that I began to wonder whether that promise made after Noah's flood was about to be broken.  After all, we deserve that it should be broken - but let's not preach.
The relatives were lovely, and accompanied us, on Friday night, to Llandaff for a superlative Chinese Dinner.   Llandaff is profoundly historic, with a cathedral and fortified Bishop's palace and all, but all I could think of was a scarlet dahlia with dark foliage!
The Cardiff Show was as good as usual and a particularly rich source of springtime gems for the woodland garden.  My favourite exhibit was runner up as Best In Show, staged by remarkable Cotswold plantsman, Chris Cooke to whom I'm always keen to listen.  His sage advice on how to coax difficult plants into a thriving happiness is second to none and after careful consultation, I came away with what he says is a foolproof trillium - Trillium flexipes - and a rather darling little dog's tooth violet, Erythronium howellii. 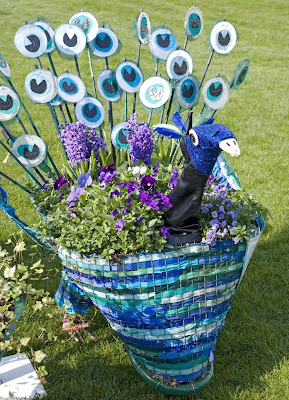 Yer actual peacock - at the Cardiff Flower Show Schools Wheelbarrow Contest.
My Better Half and Financial Controller bought, without permission, a splendid little form-hugging willow, Salix nakamurana var. yezoalpina, which I've already 'bent' round a rock by my micro-pond.  'I knew you'd love it,' she said, 'and it was the only one they'd got, so I bought it.' Slightly scary, to be so deeply understood, don't you think?
It seemed wise to counter her purchase with another little willow, S. repens 'Argentea' which lacks the quaint charm of S. nakamurana but does have bright little needle-point silver catkins in January.
There were jolly show gardens, at Cardiff, too, and some extremely comfortable and expensive furniture and a food tent that, quite out of character, I never got to. 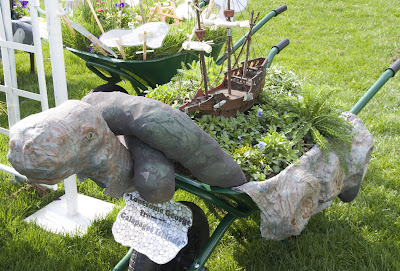 Learning about Darwin - a Galapagos Tortoise in the Schools Wheelbarrow Contest
BUT THE FEATURE OF ALL WAS THE SCHOOLS WHEELBARROW GARDEN CONTEST.
This competition has enjoyed steady growth and this year, had a record 68 entries. Each is staged by an entire school, involving teachers and children who grow the plants, design the barrow gardens, get the plants transported, set the exhibits up at the show and so on.  Every design was original and exciting; each an artistic installation in miniature; each utterly delightful.
The winners were elected by popular vote and I was told by the RHS Shows director, Stephen Bennett, that when it came to canvasssing the grannies, aunties, mums, dads and the general public, the competing kids made Parliamentary candidates look like bungling amateurs. 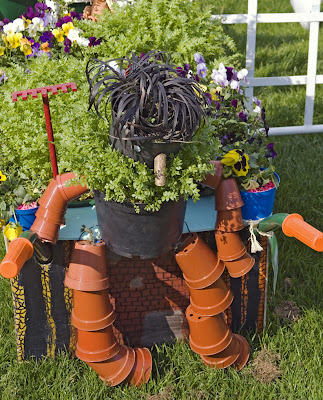 A slightly drunk-looking Flowerpot Man.
It's always so refreshing to see childish endeavour come good - and these barrows came very good indeed.  Having their work exhibited at a major flower show will have inspired some of those kids to a lifetime of loving plants and gardens.  And that can only be a good thing, in my view. 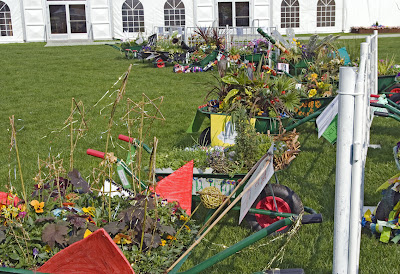 Part of the Competition.
I'm listening to Bach's 'Cello Suite in C Minor, Paul Tortelier playing.
I'm reading Harry Thompson's This Thing of Darkness, a monster novel about Captain Fitzroy of HMS Beagle and his passenger, a geezer called Chazza Darwin.  I'm not totally hooked on this 'faction' novel, yet, but it's too interesting to put down.  Also I'm told that Harry Thompson was responsible for the adult cartoon series Monkey Dust which earns him several Brownie Points as far as I'm concerned.
This day last year I was planting a scarlet kidney vetch, Epimedium 'Amber Queen' and Tiarella 'Pink Skyrocket' in my garden - all acquisitions from last year's Cardiff Show.
This evening last year I watched for the first time the Bette Davis classic Now Voyager.  What a MARVELLOUS movie!!
That's it for now - I must water my pots and prepare for tomorrow's work.  Bye bye!
Posted by Plant Mad Nige at Monday, April 20, 2009