I wrote this post on the train and pasted to the blog, so if there are any mistakes, sorry!
To Scotland – Och Aye! – to deliver the RHS Lecture for the Friends of Cruickshank Botanic Garden in the University of Aberdeen.  A ridiculously brief overnight sojourn which barely exceeds the rail travel time each way, but needs must when Chelsea looms. (My work at Chelsea begins today and lasts well into next week.) 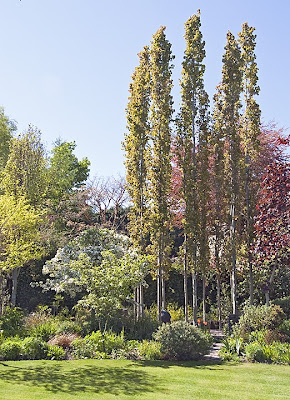 A temple of trees, in Tom Smith's Aberdeen Garden.
If you haven’t taken the East Coast rail route to Edinburgh, you won’t know what a remarkable journey it is. The best bits begin after York when you pass Darlington, home of the world’s first ever railway, on to Durham, where the Venerable Bede is buried and where the cathedral stands proudly on its hill; on to Auld Reekie, as Scotland’s capital was affectionately dubbed, then, over that triumph of innovative engineering, the Firth of Forth bridge – they’re still painting it – and up to Dundee, where the train trundles over the ‘silv'ry’ Tay, with reminders of William McGonegall’s awful doggerel rhyme.
Thence to Montrose, where a flock of eider duck were swimming in the estuary, to Arbroath, famed for its smoked haddock, Stonehaven and finally to the Granite City itself, Aberdeen.
The coastal route was spectacularly colourful with gorse looking like intense golden yellow scatter rugs peppered among emerald turf, close-cropped by beef cattle, rugged Scottish sheep and on one farm, surprisingly, a small herd of Bison.
There were frequent glimpses through crags and cliff gaps, at the North Sea which was azure, for once, in such brilliant sunshine. This was the clearest of days, with perfect visibility and the air crisp, cool and refreshing.
I was met by Ian Alexander, Keeper of the Cruickshank Botanic Garden and, because we had an afternoon free, carted off to visit the garden of Tom Smith, a retired Professor of Physics. 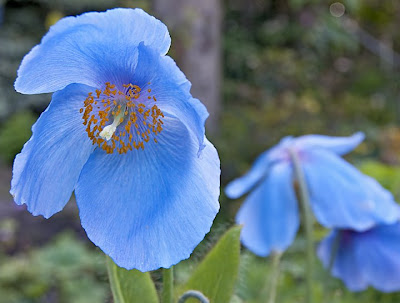 Meconopsis cultivar in Tom Smith's garden
In the suburbs of Aberdeen, one did not expect a huge acreage. But neither did one expect a life-changing lesson, not just in how to use an outdoor space to best advantage, but also, how to sustain personal vigour, vim and creativity in advancing years.
Tom Smith would not object, I hope, to my mentioning that he is not by any means a young man, having been retired for a long time. But his zest for exciting new garden projects would be exceptional in a man half his age.
His is garden is not merely divided into rooms, but consists of a complex series of small events, each causing a moment of contemplation before moving on to the next, but all skilfully linked together, creating a harmonious whole.
Densely planted areas are arranged in orbit round a large, disc-shaped lawn from which one can view such prominent features as a tall, narrow circle of fastigiate trees which create a temple-like enclosure; a small, blue summerhouse, whose interior mirrors the garden in a brightly painted mural which covers all four walls and ceiling with life-like flowers, trees and shrubs and sky.
And most prominent of objects, a vast chunk of gneiss rock, looking like a gigantic salt crystal, rhombic in shape with subtle faces and angles, interesting colour suffusions and a remarkable sense of mass. Oh, but there were so many more, fascinating and often perplexing features.
Tom’s plant knowledge is profound and his collection vast. Rhododendron species bloomed above spectacular blue Himalayan Meconopsis; trilliums and wood anemones grew in drifts and through one area, a clipped hedge resembled a serpent, ‘reeling and writhing’ through the understorey where the lower limbs of conifers and shrubs had been cut away to reveal their distinctive curved trunks. 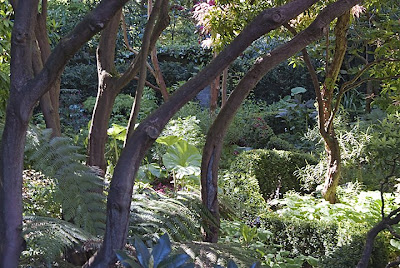 Denuded trunks, making green caverns.
By denuding the conifer trunks, he has admitted more daylight, thereby allowing more ground flora. But that has also created intriguing caverns with their own special spaces revealing almost subterranean vistas and atmospheres.
Not a single inch of this garden is neglected; not a millimetre of space is overlooked as a golden opportunity, not just for accommodating an interesting plant, but for use as yet another fragment of artistic expression.
A memorable garden – thank you so much, Tom, for what you taught me on my brief visit. I hope you won’t mind me pinching some of your ideas.
I'm listening to my heart going pitter-pat because I'm running late for the cattle truck which will transport me to bloody Chelsea. (Not that I'm negative about it or anything.  After all, who would want to be in their garden, in May???????)
This week's film was Funeral in Berlin a 60s adaptation of Len Deighton's novel with a youthful, wavy-haired Michael Caine under-acting to perfection.
This day in 2006  the PG and I were photographing a buttercup meadow with cows in it.
Byeeee!