PLUGUGLY AND FOETID TO BOOT. 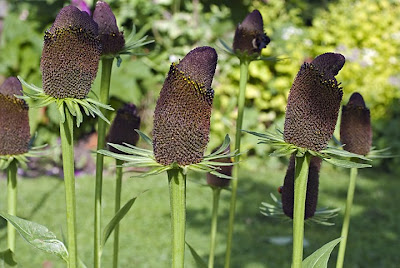 The Photographer General's Favourite Perennial
Well I have to say that Valencia was wonderful fun.
Haven't time to go through the pictures or think about what to say yet, so just to keep in touch, here's notion for you to ponder upon.
I see that the RHS, has kicked off its publicity machine for the magnificent Tatton Park Flower Show with details of an ugly plant competition. Some of the plants they nominate are a bit peculiar, but many of them strike me as being extraodinarily beautiful. And when you consider what remarkable adversity some of them grow in, the beauty, as seen in their adaptation over millions of years, is sublime.
But there are plants which, let's face it, are just plain hideous. The Mediterranean horror, Dracunculus vulgaris looks like hell on earth and smells like a dead donkey that has been left in the Cretan sun for six weeks.
And on top of that, we know we can always rely on plant breeders to make a bad thing worse. Bearded irises, for example, were once gorgeous but nowadays, you can hardly find a single hybrid that hasn't so many frills and furbelows that each bloom resembles underwear purchased at dubious lingerie stores and worn by certain ladies of the night.
So I hereby launch the Silvertreedaze Ugly Plant Contest. For starters, will you please welcome Rudbeckia occidentalis in its 'improved' and 'selected' form 'Green Wizard.'
The name is ridiculous, since the flowers are neither green nor wizardlike. They are brown, nasty, scatological in shape and as they age, they lengthen and curl, making them even more faecal.
The pictures are by the Photographer General who violently objects to this plant growing in my garden, and who calls them, succinctly, 'Turds on Sticks.' She dislikes them growing in the little border by the lawn where we drink our afternoon tea and is demanding that the be composted forthwith. 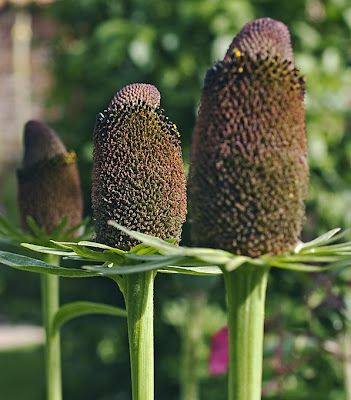 Turds on sticks.
I'm listening to Beethoven's Violin Concerto, having recently purchased it from the iTunes store, one of my children having pinched my CD version.
I'm reading Little Dorrit - the Dickens' account of the Office of Circumlocution describes to a tee what will happen to the Iraq War Enquiry.
This time last week I was in Valencia - pictures and story soon, I promise.
Finally, this week's film was The Fall, by Tarsem Singh, recommended by James A-S, on this blog, and thoroughly enjoyed. Stupendous film locations, in Spain - Seville, I think - South Africa, China and so on. Exquisite colours, glorious bodies - though most frequently male - and clever interior sets. The child actor was utterly natural, with such things as nose picking and 'desperate-for-a-pee-but-too-distracted-to-go-to-the-loo' jiggling left purposely in the narrative. Distinctly un-Hollywood, but it strengthened the artistry. BUT, the story structure was weak, the screenplay clunked along a bit painfully and I really couldn't give a toss for the stuntman character who seemed a weak-minded twat, by and large. Luvverly film, though and I'm glad to have seen it.
Posted by Plant Mad Nige at Friday, June 19, 2009