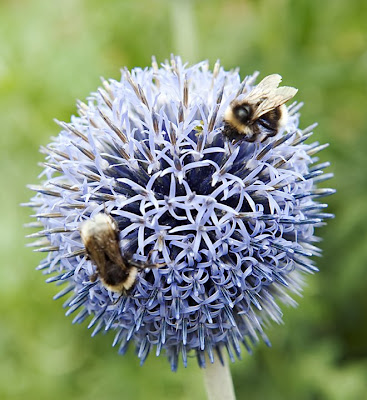 Two rather tired bumble bees on Echinops ritro. Bees have made a come-back in our garden this year.
Well, since you ask, it's been a bit of a bastard, these last few days.
My 84 year-old mother is still on her back in hospital 150 miles from her home and has been there for a month, ticking over on 25% lung power.
Birds have eaten my third sowing of Swiss Chard - don't even ask what happened to the first two!
I did something nasty to my back when leaping energetically out of my car - it now takes a minute or two to straighten up when I stand.
Parts of the garden are getting so weedy that the perennials are under threat and the courgettes resemble torpedoes with nuclear warheads.
And a particularly nasty species of aphid has corrupted the growing tips of one of my favourite autumn perennials, Leucanthemella serotina aka Chrysanthemum uliginosum. The top few leaves have all bunched up and stuck together.
On top of that, parts of my new yew hedge, previously described here, really have failed and will have to be replaced. Still, mustn't grumble! 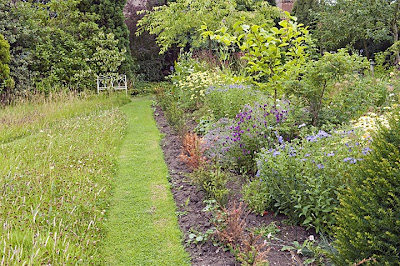 Woudn't yew know it? The surviving plants have done extremely well but having to replace some means a year's delay on reaching the desired 1.6 metre height. The border will have to be re-planted to face west, before the hedge develops.
Actually, I do have another serious gripe which I'm sure is not just a solo moan. What is happening to our language? Have we become so lazy that we can't be arsed to pull the right words out of our limited vocabularies but would rather resort to the same crappy old clichéd terms that everyone else uses?
In garden writing, the commonest example of such etymological sloth is the word which describes the effect of an injurious blow to the head, expressed in the present participle - or is that a gerund? I refer to the epithet 'stunning.' Is there no other way of depicting a burgeoning hanging basket, a magnificent bed of tulips, a Piet Oudolf border, the England Cricket Team's recent eleven over last wicket stand or James Alexander-Sinclair's hats than 'stunning???' I mean how about magnificent, kaleidoscopic, sumptuous, life-changing, orgasmic, voluptuous, pulchritudinous, elegiac, psychedelic, polychromatic, gargantuan, festal, fab, well-horny - indeed, anything rather than that bloody word 'stunning?'
I was once told, by an eminent editor that he finally decided to sack a garden writer - and this was decades ago, by the way - because an opening line in his copy ran something like this. 'I was stunned, last week, by the hanging baskets in Cheltenham.' The writer, no doubt, thought this was a clever shift in the use of the same cliché - from gerundive to imperfect tense - but the editor thought he had actually knocked himself out by bumping into the floral displays in that honey-stoned Cotswold spa town of second hand book shops and over-priced tea rooms. Indeed, he had knocked himself out - of the paper, that is.
So I wondered if any of you might like to join my voluntary ban on use of the word STUNNING in future postings, except where a blow to the head has actually taken place? I know it turns up on some blogs in this community, but wouldn't dream of naming names! What do you think?
And while we're on the topic, there's another word which puzzles me. What is this thing called 'leverage?' If you use a lever and fulcrum, to move an object, the task is made easier, ie, you have leverage. But now the noun is becoming a verb, so you have business people 'leveraging' things. That is not English, it's jargon - an ugly word describing ugly pseudolanguage. Comfort zone, wiggle room, singing off the same hymn sheet, pushing the envelope, blue-sky thoughts, 'bored of,' rather than 'bored with' or 'by' or worse, 'fed up of' - Lord preserve us from this hideous, babbling Babel, innit!
And some positive things:
Bees are back! They've been more plentiful, in our garden, than for the past three or four years, and are buzzing enthusiastically among our perennials. I love the sound and sight of them, but feel sad to see them working their short lives away so feverishly.
Several impromptu plants have been exceedingly pretty, this summer. Salvia sclarea var turkestanica seeds all over the place and has given us joy in the gravel, by the front gate, in odd dry corners and so on. We have two shades - albino and mauve-purple flushed.
Since removing three big whitebeams, the meadow has changed character, growing its grass and flowers shorter, thanks to the extra light, and some yellow Lady's Bedstraw, which I was sure I'd lost, has flourished and flowered. Hurrah! 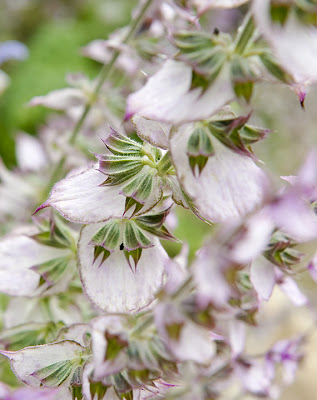 One of the self-sown Salvia sclarea var turkestanica - the bracts are prettier than the flowers and last for ages.
And now that I've stood down as RHS Council Vice-Chairman - but still remain as an ordinary Council Member - I will have a little more time to do paid work and can, perhaps, be a little more outspoken than previously from time to time. Award winning journalists need no longer describe me as 'Presidential' - see his latest post - since I'm just a dogsbody these days, and with the extra time, I should be able to make even my own poor garden look absolutely stunning - whoops, sorry!
I'm listening to the cement mixer making the foundations for my fantastic new greenhouse which is coming on 17th August. I can hardly wait! Watch this space, for more news on that one.
This week's film was Hitchcock's Psycho which we haven't viewed for donkey's ears. It still works, despite the notoriety and it's fascinating to see Janet Leigh in light of the ideal Hitchcock actress. He clearly had a sort of a thing about that particular type of gal. The Photographer General tells me that one of the minor roles - Janet Leigh's colleague at the estate agents office - was played by a Hitchcock relative. Once she had explained that, I was mesmerised by the family resemblance. It was as if the portly movie maker had dropped a decade and gone into drag.
This day in 2006 I had gout and watched the Mankiewicz masterpiece, All About Eve, with Bette Davis and George Sanders.
Sorry - far too long a post, yet again, and too much ranting. Pure horticulture next time, I promised!
Happy propagules to all!
Posted by Plant Mad Nige at Thursday, July 16, 2009