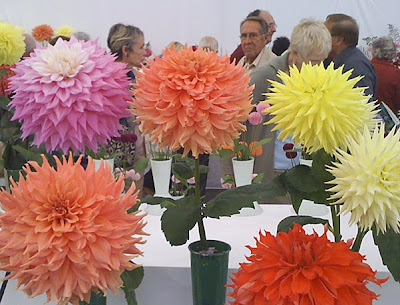 Competition dahlias at Harrogate, shot on my iPhone which, as I've said before, is a fab phone but has an absolutely pants camera. Such big blossoms had me striving to invent an apt collective noun. A 'vulgarity' of dahlias? A blowzitude? If anyone can do better, let me know.
I promised a proper post, this week and have to say that I’ve been itching to mention dahlias. I wrote a piece on them recently in the Mail – here – comparing the brash giants my father loved growing with today's more elegant lovelies.
I thought the outsize wedding hat dahlia was a thing of the past, in these days of hazy, grassy perennial borders and naturalistic planting but I was wrong. They were at the Harrogate Autumn flower show, last week, in vast numbers, practically filling an entire hall. The gigantic flowers, in uncompromising colours, were huge enough to make show visitors look small and drab. (Though some of us show visitors were, indeed, small and drab.)
To avoid arrest by the Fashion Police, I admit that in the past, I’ve often shuddered with disapproval at the huge-flowered monsters so loved by competition growers. But I think it’s time I admitted to harbouring a secret admiration of such floral behemoths. I don’t think I’d grow any at home, because I don’t grow for showing or competing, but when you see these flowers lined up on a show bench, all you can say wow! Gosh! Begorrah! Or, if you’re a Kiwi, Cripes!

At Harrogate, I lurked, by the entrance and heard almost everyone exclaim in surprise and delight as they came into the hall.
The only people with miserable faces were the judges. Why do they – or I should say ‘we’ since I’m also a judge – often look as though we’ve just swallowed a tumbler of vinegar, when judging.

Big white cactus dahlias at Harrogate Autumn Flower Show
At Harrogate I bumped into King of Dahlias Jon Wheatley. His team manages the National Dahlia Collection at Winchester Growers and his Chelsea exhibit, you may recall, won not only a Gold Medal but also the President’s Award this year. We discussed the virtues of new varieties such as D. ‘Knockout’ – dark leaved with luminous yellow, single flowers – and agreed that with such virtues as handsome foliage, manageable flowers and stately growth habits, these made supreme border plants. Furthermore, they flower freely, provided you dead-head them, until November.
To Jon's list of outstanding performers I'd add 'Twynings After Eight' for its soft white flowers and chocolate foliage, 'Woodbridge' which is worth having, just for the foliage, and a personal choice, 'Bishop of Auckland' whose mid-sized, single, port-coloured flowers go on almost forever.
As far as management is concerned, climate change has resulted in a Hamlet-like dilemma for dahlia growers: ‘To lift, or not to lift?’ Whether ‘tis nobler in the husbandry to suffer the slings and arrows of a possibly outrageous winter – and leave the dahlias in the ground – or to take up the tubers against a sea of troubles with moulds and rots in the storage shed.

Jon says: ‘if you live south of The Wash, leave them in and treat them like hardy perennials – unless your soil is wet and heavy. Elsewhere, lift the tubers. I’m level with The Wash, but my soil is heavy, so I lift.
But here’s Jon’s best gem of advice: Don’t cut them right back. Instead, pot up your dahlias, in autumn – but before they get frosted – and keep them partially in growth in a greenhouse, so that they can subside gently into dormancy. That’s a method I’m definitely going to try, now that I’ve got the lovely Wendy to play in. 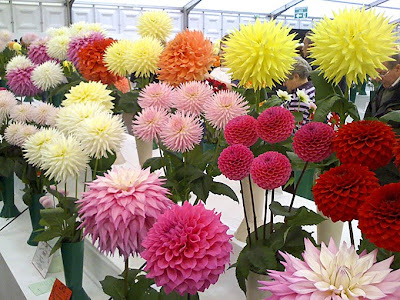 You have to admire the quality of the blooms and the skill in getting them up to show pitch.
And if you haven’t a greenhouse and live on clay, north of, say, Leicester? Lift them in the old way, but make sure the tubers are dry before storing. I learnt that the hard way last winter when I lifted them sodden and lost about 60% of my tubers, even though they were stored in airy trays, in a warm shed, and cosseted in bubble wrap.
I’m listening to Traffic outside, since I’m writing this post in the RHS Lindley Library, Vincent Square, London. You can go online for an hour for £1, here, or for 18 hours for £5. I think ALL libraries should provide free wireless internet collections and will tub thump at my next meeting with the RHS Bigwigs.

This week’s film was Dorian Gray seen at the ritzy Odeon, Leicester Square. Lovely cinema, but it should be: my balcony seat cost £19. The film was a re-hash of the Oscar Wilde story and couldn’t make up its mind whether to be a treatise on Victorian morality, a gothic horror story or a ‘taut’ thriller. The gothicality was overdone, much of the film being shot in grim light and set in a bizarre Walt Disney London.
The lead, Ben Barnes – sloe-eyed, reminiscent of Johnny Depp – just didn’t strike me as a Dorian Gray type but Colin Firth provided some convincing acting. I actually burst out laughing at the scene where the forever young Gray returns after a long absence and we see the rest of the cast suddenly, hideously aged and, for some reason, grey all over and looking positively cobwebby, like the Fluck and Law John Major. Oh, and the soundtrack was awful – endless bursts of dirgy, funereal music.
¡Hasta la proxima!
Posted by Plant Mad Nige at Thursday, September 24, 2009