THE JACK BOOTS ARE JUST BEHIND YOU

Just before seasonal goodwill begins to emanate - I think it's time for a rant! Here goes:
First, to be read fff:
WOOOOAAAAAARRRRRRHHHHHGGGGGGG!!!!!!!
NNNNNNNNNNNNGGGGGGGGGERRRRRRRRRRRRRRAAAHH!!!!!!!!
I’m sickened, enraged, outraged, upraged, downraged and sideraged by some of the barmy-army policy-making that has been issuing in twin torrents, from Brussels and Westminster.
What have these two authoritative regimes – Mr Brarn's and Monsewer Rumpypumpy's I mean – got against us gardeners? What did we do wrong? Is it just spite, on the part of their officials, because we love what we do, whereas the bureaucrats have to sit bored rigid, in over-heated offices with nothing to look forward to but their index-linked pensions and featherbedded retirement arrangements?
This isn’t a rant about Health and Safety per se. (don’t get me started on that!) And I’m not railing about the Police who seem to have been given more powers, lately, than Hitler entrusted to Himmler and his gang. It isn’t about giving middle class grannies caught driving at 35mph criminal records, just to boost the crime-busters’ league tables. And it certainly isn't about blokes who help out with the Scouts being assumed pederasts until issued with a piece of official paper which says they aren’t. Although all those are examples of how this government has had it in for Middle Englanders over the last ten years or so. 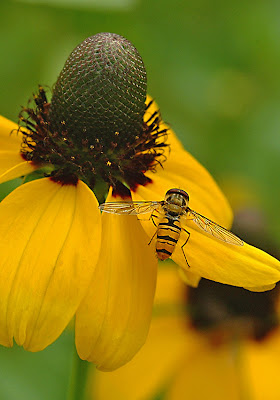 A hoverfly on Ratibida. Valuable aphid predators, at risk from blunderbuss insecticides.
No, this is what is currently annoying me more:
Next year, we are to lose two more valuable garden products, bifenthrin and mancozeb. We’re allowed to buy them now, but must use up stocks before the end of 2010. (Newspeak gobbledegook for you here.)
You may or may not approve of manufactured pesticides. I respect your views either way. But from the middle of next year, like them or not, these are two more that we won’t be able to buy. There is practically nothing left to us, for pest control, other than germ warfare or black magic!
And it gets worse:
Aminopyralid, a herbicide whose residues have caused extensive harm to plants in private gardens has been reinstated for agricultural use. Why?

Let’s deal with the aminopyralid first. Over the past 18 months, I’ve received lots of letters from readers whose plants were ruined by suspected contamination with aminopyralid, a herbicide for pastures and hay crops. The aminopyralid residues appear to have ended up in farmyard or stable manure. (More info here; plus gov crap here and here)

I don’t know how you feel about this, but it seems to me that if a chemical sprayed in small quantities onto pasture, is persistent enough to come through the digestive system of a ruminant or a horse and can still, as a contaminant in manure, kill broadleaved plants, it’s nasty stuff.
So, is it banned? Is it heck! Subject to ‘precautionary measures,’ the stuff will be available for farmers to spray on their pasture. Forage, grass or manure has to stay on the farm, if the chemical is used. Hmmm! How well will this be policed? Who did the 'risk assessment' on that one??
The message to gardeners is clear. Don’t use farmyard manure unless you know precisely where it’s from and what the animals that crapped it have eaten. What a crying shame, when farmyard and stable manure were such valuable and reliable soil improvers and fertilizers! 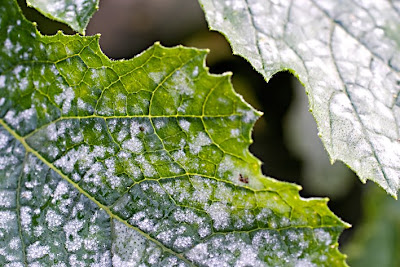 Mildew looks almost pretty on my courgettes. It's almost a given that all courgette crops will get it, in time, but fungicide is hardly necessary if management is good. Potato blight is another matter, and needs fungicide control in most years.
Now the mancozeb. This has been sold as Dithane and used safely for decades. It helps to prevent potato blight, among other diseases, and has low toxicity. Organic gardeners may approve of its demise, but the alternatives offered by former suppliers of Dithane are to be based on copper.

Copper salts are toxic, though not dangerous if used wisely. In young lambs, though, as little as 10 parts per million of copper can be lethal. The substitute is thus more deadly than the original fungicide. How logical is that? 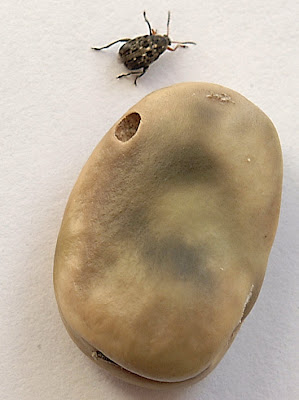 Bean seed beetle. A light infestation, on home-saved seed is tolerable.
The bifenthrin issue is less clear-cut. It is a synthetic pyrethroid and as such, may be implicated in the problems associated with bee colonies, even when bees have not been in direct contact. And it will certainly harm them if they absorb any of the spray directly.
A few years back, products like Roseclear contained pirimicarb (carbamate) which was harmless to bees but killed aphids. But pirimicarb was withdrawn, and replaced with the more blunderbussy bifentrhin. A retrograde step both for pest control, and for wildlife conservation. And now that the nastier bifenthrin is going, what have we left? Diddley Squat!!
Bt or Bacillus thuringiacus is championed by organic gardeners, but is even more of a blunderbuss bug killer than bifentrhin. And then there are nematodes loaded with entomopathic bacteria for an increasing range of pests. I’m not totally happy about any those, but will return to that wormy topic when I’ve done more research.

Management and good husbandry are the best pesticides and always will be.
But it was handy to have a shotgun in the cupboard, even if it was hardly ever needed. And now BIG GOVERNMENT is taking the last of the cartridges away, along with more of our civil liberties. Hands off our rights!!

Whoops, I’m beginning to sound like the The Sun!
Back to jollier issues next time. Sorry it’s such a long post, yet again. 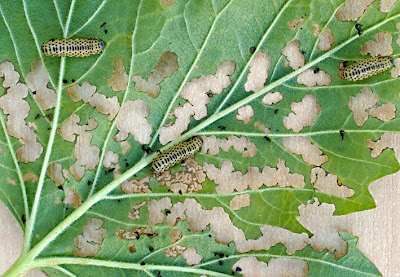 Viburnum beetle: a spectacular pest, and ugly with it, but is insecticide necessary to control it? We'll see, now that there's little of any use left to private gardeners.
I’m listening to Berlioz Symphonie Fantastique, the bit about the guillotine. Chop chop!

This week’s film was Soderbergh’s Traffic, a mosaic of story lines about drug cartels working through Mexico. Long, but riveting with some great sequences in Mexico. Michael Douglas was OK, too, though his role as some kind of Drugs Czar was supremely unconvincing.

This day in 1991 there was thick ice on our pond which didn’t melt all day. I was working up material for BBC Gardeners World Magazine and writing my first novel, The Kirkland Acres, which was published, eventually, by Orion. It’s out of print but in the libraries.
Bye bye.
Posted by Plant Mad Nige at Tuesday, December 08, 2009