GNARLED, WARPED AND TWISTED AS A POLITICIAN'S CONSCIENCE 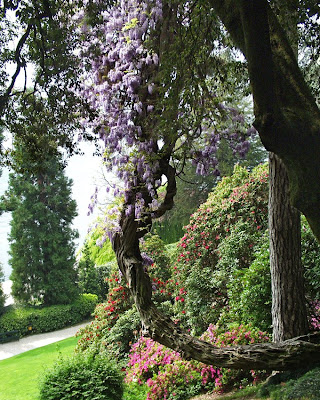 A massive wisteria at the Villa Carlotta, Menaggio, on Lake Como, Italy.
A while ago, in a comment posted on the fascinating blog Constant Gardener, VP (who actually lives here) mentioned, that gardener and nurseryman extraordinaire, Keith Wiley, had talked about growing a walk of free-standing wisterias. What an absolutely spiffing idea! (And what an absolutely frightful opening sentence!)

I remember Keith from some years ago, as an inspired young head gardener at the Garden House, Buckland Monachorum, in rainy Devon. He was for ever bubbling over with enthusiasm and vim, cutting whacking great holes in hedges to make big vistas and doing all sorts of exciting and original things, all on a twopenny-ha'penny budget.

But a wisteria walk! Now there's a concept. Mmmmmm!

Picture it: strolling down a classically hogginned pathway, with a lovely on your arm as you pass under branches hung with elegant racemes, bee-loud by day but luminous in the romantic moonlight. If a nightingale warbled in the background and a flute of Dom Perignon gently effervesced in the hand that wasn't supporting the lovely, it would be true perfection. Eden would look tawdry by comparison.

But wisteria, now. Was there ever a more strongly paradoxical love-hate relationship than between the gardener and wisteria?

Wisteria's subtler virtues need time to engage with, and an appreciative eye. The foliage is naturally golden, in a subtle sort of way, deepening and warming its hue to old gold each autumn. The emerging baby leaves are bronze-tinged, though, making a coppery contrast with the blossoms.

But those ancient stems! In age, they become magnificently gnarled, distorted, convoluted and fascinating. As with Dickens' characters, they are over-blown and exaggerated - a surreal tangle of elephant limbs. In summer, these huge, tortuous trunks are modestly dressed with semi-concealing foliage but all is bared, in winter: a shocking exposé of knots and couplings, with twiggy blossom spurs and stunted little side-branches punctuating the heavyweight limbs. 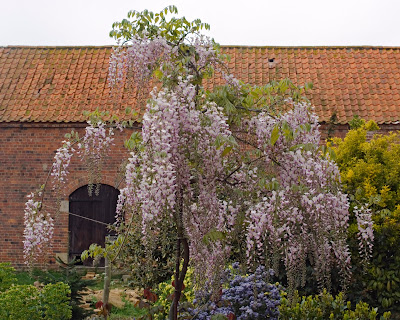 The damnedest thing about wisterias is that they won’t flower. They they won't grow where you want them to, either, and never end up as the perfect framework, furnishing the wall at even intervals. The stems are so impotent, in youth, that they need tying up with string every six inches. But in maturity, they're so craggy and bloody minded that the stone wall on which they are trained seems bendier. Wisterias on my parents' house undermined the fabric and then, in a fit of remorse, helped to prop the the building up with their massive trunks.

Keith Wiley's notion of a wisteria walk calls for acreage, not to mention patience. But anyone can do a single free-standing wistera. I've even seen some passable bonsai ones, though that is somewhat more esoteric than my gardening aspires to.

We had some beauties at my last house. Their blossoms looked superb against the beige oölitic limestone walls and when we moved, six years ago, they were among the plants I missed most. So for consolation, I planted three at our current gaff. One, Wisteria sinensis covers part of a the south elevation where it makes friends with Rosa banksiae 'Lutea.' The other two, W. floribunda 'Alba' and the quaintly pink-flowered W. floribunda 'Honko,' 'Hon-Beni' or 'Rosea' - depending on which authority you refer to, are trained to be free standing. 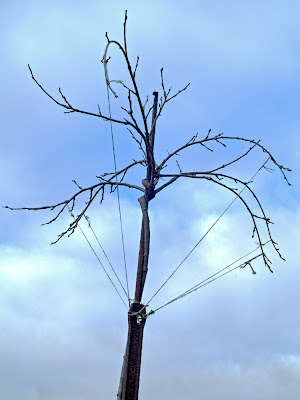 I wasn't sure how one is supposed to force a rampant climber to be a well-behaved, non-clingy, small tree. So I did it with my usual combination of ignorance, poor horticulture and crass brutality. I filched some solid metal stakes - they'd once formed part of an estate's stately enclosures, no doubt - and rammed them into the ground. My good friend Chris Bailes, curator at Rosemoor, had told me that if you allow the young stem to twine round a metal pole it will, eventually, engulf that pole and thus develop a heart of steel. I did just that, and already, parts of the metal are nicely engulfed. (Hope no one attempts to chainsaw these up in 100 years time!)

As for the top growth, I didn't want to do the conventional umbrella trainer thing. I know the Victorians loved those, but I think they look contrived and horrible, so instead I had lots of fun subjecting my wisteria plants to bondage sessions. Each main stem (side shoots correctly pruned to seven buds in August and three in January) had a length of Nutscene jute string tied to its tip and was then strained downwards so that the other end of the string could be tied to the stake. And so far, it has worked. Both trees are pretty in spring, looking reasonably natural and un-umbrella-ish. Both are also developing an interesting winter outline. I took the strings away last winter but the branches remain elegantly bent. 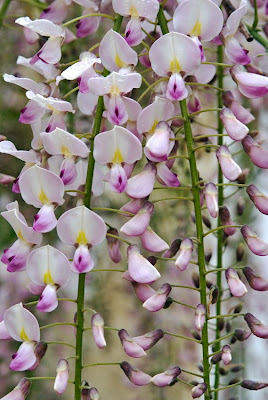 Wisteria floribunda 'Rosea.' The racemes are pretty for a fortnight.

There's more on Keith Wiley here and a really nice little bloginterview with him here.

This week's film was The Green Man, a slight but rather charming farce made in 1956 and starring Alastair Sim, George Cole, Terry Thomas and Jill Adams. Basil Dearden and Robert Day directed. While audiences were watching this comedy of errors, Suez was going on and the Russians were driving tanks over Hungarians. It's a funny old world, isn't it?

This day in 1980, a Sunday, I spent the morning cleaning out the fireplaces and helping my elder son to do his homework. (He was seven.) After a lunch of roast pork, I moved some rose bushes and juggled plants in a spring border.

We have another snowdrop out. Bye bye!