LUNCH WAS RADIANT AND THE QUEEN DELICIOUS 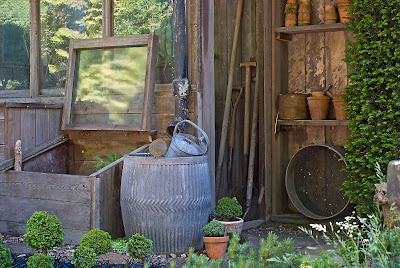 To neutralise such a excessive overblow of glorious Chelsea flarze and gaahdens, I thought this shabby little nest of cobwebby lovelies might be more fun to look at. The PG, as usual, landed me with a million wonderful shots to edit and catalogue. More than all the others, even the exquisite garden views, I thought this was the charmingest, but at the same time, easily the most Chelsealy, cheezily bogus of the lot. Not sure who designed the garden where these were, but I'm sure if you care that much, you'll probably know already.
(The PG has just informed me, slightly crossly, that it was the Pine and Conifer Enthusiasts Garden. Hmmm. I'm even less enthusiastic about conifers than I am about Chelsea. Nice wash tub, though!)
Tell you what. I wouldn't bother much with this post, if I were you. It is being scratched out in spiteful haste, before we depart the wind-slapped, wilting, arid dump formerly known as My Garden, for warmer, wetter, friendlier climes.
The best thing about it all is that bloody Chelsea is over - or it is for me. Oh, it was lots of fun, and the standard utterly superb - especially in the Floral Pavilion – but I have been increasingly convinced, over the past forty or so years, that Chelsea really isn't me.
I try desperately hard to enthuse over the gardens, and really want to care about who wins what, but this year, having been deeply embroiled with the rigours of the new judging system, and with a process called Moderation, I really fell down badly on the enthusiaz front. I didn't even get to see any of the gardens until Tuesday morning, and by then, was limited to the odd glimpse whenever a tiny space cleared, among the backs of a million middle class heads. And I'd been at the show ground since Saturday! 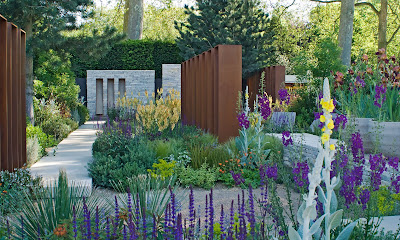 The Daily Telegraph Garden
My favourite floral stand was Avon Bulbs - wonderful selection of fascinating and exquisitely coloured bulby things. I think it's their ephemeral nature that make them so irresistible and I fell deeply in love with a pink Camassia. I must have a bulb of it, and soon. My mini-meadow has camassias and, more to the point, they seem happy in it and are seeding.
And I thought Andy Sturgeon's garden was an absolute belter - if you like that sort of thing. I loved the planting - gloriously dreamy colours - but wasn't sure about the giant, upright DVD racks or the stone recesses at the back. This is not in the slightest way, a criticism of Andy.
The man is a genius and his gardens are fabulous. But, like jeans that reveal the buttocks on fat, slutty girls, expensive loafers worn ostentatiously - by males - without socks or for that matter, Tiramisu, this type of garden just doesn't float my boat. Perhaps it's Chelsea gardens in general that fill me with fear and loathing. It's all such a lot of flummery. 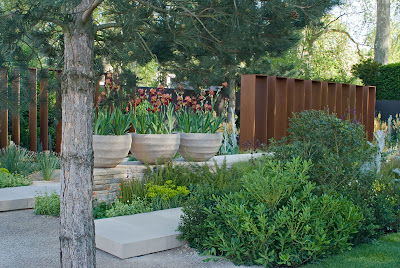 More DT Garden
We had our first Plantsmanship Conference and between the hundred or so experts in the room, came up with our Chelsea New Plant of the Year - or CNPOTY. It's an superb streptocarpus bred by Dibleys. You can see details and the runners up here.
Other things about Chelsea:
I lunched next to the High Commissioner for South Africa, drank Champers with Her Majesty, who looked suitably floral and seemed to be in an extraordinarily good mood; wore a new neck-tie - made, I believe, by one Duchamp, but much prettier than his urinal, though less useful. I was rather chastened to learn that the PG has ordered an expensive obelisk. If this goes much further, we'll be going all Daily Telegraph.
This week's film was really spectacularly awful. It was Disney's new Alice in Wonderland. I know it was stupid to pay money to see it but there were three good reasons: we haven't yet seen the new 3D; it starred Johnny Depp and it was filmed at Anthony, in Cornwall.
What an absolute bummer! The film was not merely poor, but a shocking insult to anyone's intelligence and downright shabby in its treatment of poor old Lewis Carrol and the original Alice books. There were pointless inventions of a pitiful new plot, excessive use of computerage, a lousy story, tedious pacing and . . . well, there's no point in saying any more. Even Depp's brilliance failed to provide much relief. The 3D was OK, but I wouldn't need to see it again, I don't think.
This time last year It was Day Two of a diet.
I'm listening to Bach's Cantata number 67 'Hold in Affection Jesus Christ' - a nod to Ascensiontide which, I believe, has just past. This ancient recording features the immortal Kathleen Ferrier. That voice still makes me cry.
And finally - we've harvested our first 'lunch box' cucumbers. Now I know why they're called 'lunch box' varieties. How very rude! Tasty little chaps, though!
Off to Singapore - speak soon!
Posted by Plant Mad Nige at Thursday, May 27, 2010