ENJOY THE WARMTH OF A REAL FIRE 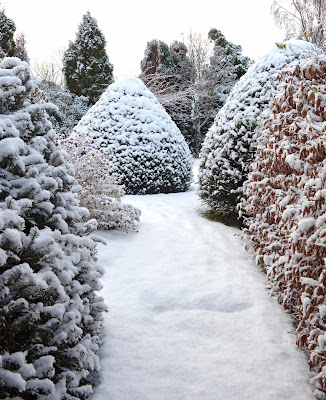 A happy Christmas to everyone, and a blissful New Year
Our garden looks neater in snow, but infinitely more boring. I'd rather have a the usual mess, with pretties blooming bravely, than all this Narnia stuff. One expects the nasty Snow Queen at any moment.
Well, I promised words and pictures about our fire, so here they are, scobbed from my diary entry for Saturday 11th December.

At about 2.15 in the morning, I was awakened by a strange light shining through the dressing room curtains. When I got up to investigate, flames were belching out of the side of the window frame and the venetian blinds were just catching fire. As I reached full wakefulness, it became obvious that the room was full of smoke and we had a fire. But how come it was issuing from such a strange place?

I beat the flames out quite easily, with a damp bath mat, but it was clear that a fire was working deep in the chimney breast. I leapt into a pair of trousers, while [the PG] phoned the fire brigade.

Within half an hour, we had two fire engines outside and eleven firemen in the house. They put out the most obvious fire, by the window, and then began to chip the masonry away from the chimney breast. The building fabric is hopeless - brickbats, rubble, clay and lime mortar - and they soon had a sizeable hole.

A long beam, it seems, ran from the window all the way across the back of the chimney void. Why? Who knows. It doesn’t seem to be fulfilling any structural need but had been in contact with the chimney liner.

So in spite of the vast volume of fire-proof, insulating vermiculite, the liner caused the beam to smoulder and eventually, up it went. It could have been smouldering for weeks.

They were soon able to control the spread, but needed to lift off part of the roof, to get at southern end of the beam, and promised to return, at about noon, to check that the fire was truly out. 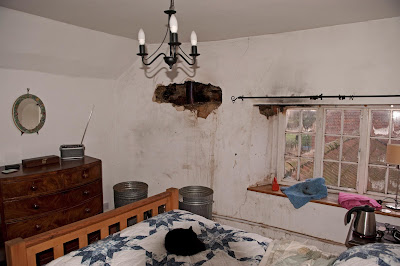 The remains of my what I pretentiously call my dressing room with the new hole. The black cat decided that there was no longer any risk, and took up residence there as soon as the firemen had left, despite the disgusting smell of smoke and soot.

The firemen were absolutely fantastic. They were polite, calm and helpful. We kept plying them with tea; they kept any damage to an absolute minimum. And they cleared up as best they could before they left.

You can see where the fire crept along the timber, to emerge at the window frame. The buried beam was possibly a tie, incorporated during the building process to improve structural strength.

A Couple of points come out of all this.

1. Waking up to see your bedroom on fire is a little unnerving.

2. Smoke alarms aren't all they're cracked up to be. Ours go off if the PG roasts a chicken, or if I burn a crumpet, but did not begin sounding, that night, until the room was pretty smoky and the fire rattling along nicely.

3. We were unbelievably lucky. Our normal bedroom was being decorated, which is why we were sleeping in the room where the fire began. Had we not been there, much of the house could have been destroyed, before the fire was discovered.

4. Everyone involved in helping us to deal with this crisis - the firemen, the insurers, loss adjuster and and particularly our surveyor – you all know who you are! – have been supremely helpful and supportive. That means an awful lot when the roof over one's head is under threat.

5. Watching soppy Xmas films like White Christmas and Love, Actually is fun, but not so jolly when you're wrapped in blankets and wearing woolly hats, while the beautifully designed modern wood-burning stove sits, impotent and frigid, waiting to be re-instated. We have ordered a big, electric, oil-filled radiator!

This day last year we were delivering goodies to our children and grandchildren in Surrey. We planned a similar expedition this year but chickened out, thanks to my accurate weather forecast. Being a farmer for 10 years has its advantages and one is being able to interpret weather. BBC Radio forecasting is atrocious these days, by the way - subject for a rant one day soon.

This week's film was Holiday Inn. I love the Berlin songs and the perfection of Fred Astaire's footwork.

MERRY CHRISTMAS TO ALL AND GOD BLESS US, EVERY ONE ETC. ETC.

(Am I the only one who thinks that it might have been better in the story if Tiny Tim had actually died? Dickens almost always kills off his ailing pauper children, so why did this one escape?) Bah Humbug!