Hullo from across the Atlantic!
In every trip – even one as exciting, fulfilling and pleasurable as this – there's a low point.  Usually, that first discordant note jars at the point in one's travels when the thrill of arrival has worn off, but when the prospect of going home and sleeping in one's own familiar bed is still too far away to relish. 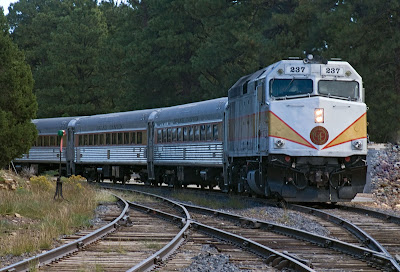 Trains, in the US tend to be old, shabby and slow - the most comfortable way to see it all.

This trip has been different. The high points have towered so mightily that one has tended to view everything with starry-eyed wonder.  We have immersed ourselves in American history, delved into the fascinating system of US governance, browsed a Founding Father's 18th century Library, gazed across millions of acres of maize and soya, growing in one of the world's biggest and most productive bread baskets - the plains of the mid-West.

We have crossed the mighty Mississippi, close to the Great Lakes; slummed for a night in Chicago where we visited the site of the Valentine's Day Massacre; and traversed some of America's most rugged, awe-inspiring and moving landscapes including the Rockies, the high sierras of Colorado, Utah and Arizona and the Grand Canyon.

And we have crossed the Mojave Desert to arrive at the low point.

Los Angeles itself is not a city, as such, but a disturbing dream.  As our shabby Amtrak train crawled through well-watered, neat and appealing suburbs, we could see the yellow-brown pall of pollution marking where the conurbation lay.  Hundreds of elegant, leggy, black-necked stilts and other wading birds were feeding in concreted water courses and along the arid tracks and there were fascinating desert plants clinging to life.  But despite these natural attractions, it seemed clear that Los Angeles was to be 'got through' rather than enjoyed. 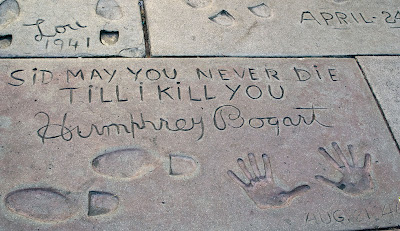 The incomparable Bogey, reduced to dabbling in wet cement.  Why?

And as soon as we had disembarked, our guide seemed hell-bent in getting us away from Los Angeles itself and into Hollywood.  There's a simple, catch-all word to sum up Hollywood – 'horrible.'  Our guide droned on about films, film stars, property values, and great traditions.  We were dragged out of our bus to see the disfigured concrete paving, outside the grotesque 'Chinese Theatre' where stars pushed hands, feet or other parts of their anatomies into the setting cement.  And we were driven through Beverly Hills which seemed little more than a pretentious suburb with high hedges hiding nasty-looking houses.  Apparently Marilyn Monroe bought one in secret, to escape to when the public were being too adoring.  I wonder why no one suggested that to get away, she could have bought a cottage in Alaska for a fraction the price.


Thank goodness, our stay in Los Angeles lasted less than 24 hours, much of which was spent aboard the once glorious, now sadly delapidated and abused RMS Queen Mary, the liner (NOT cruise ship) in which I travelled to New York from Southampton in September 1964.


But now we're in wonderful, glorious, delicious San Francisco and have also just had an AMAZINGLY delightful sojourn in the Sierra Nevada.  More on that, soon. 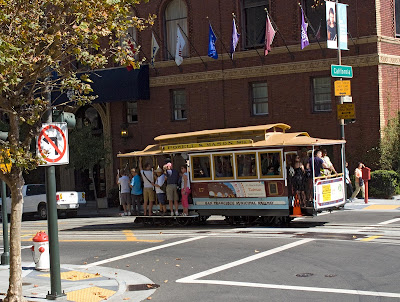 A San Francisco cable car like this, pulled by underground moving cables, is clanking by as I write this caption. 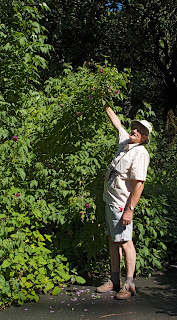 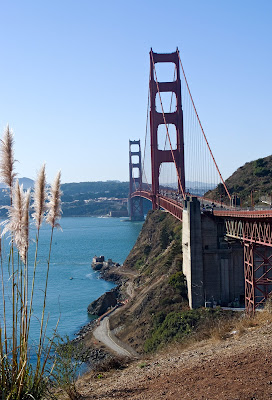 The Golden Gate bridge, painted International Orange which makes it look as though they've done the primer but forgotten to add a top coat. 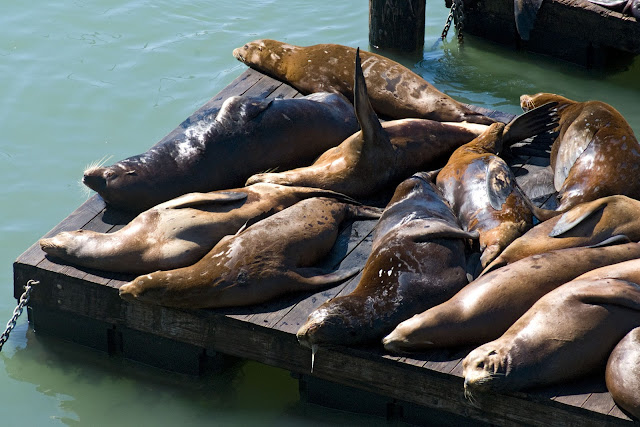 Not seals – as stated in the some of the publicity blurb – but sea lions, slummocking at Fisherman's Wharf.  San Francisco is almost totally delightful.  But Fisherman's Wharf is vile – a  milling throng of slack-bellied gawping tourists, me included – bewildered by the astronomical prices and dismal quality of the food on offer there.  It's such a shame because you can find superb restaurants to suit all pockets, in this city, often in delightful surroundings. But Fishermans' Wharf is somewhere to keep away from.

I'm listening to clanking cable  cars, outside our hotel window near Union Square.

This time next week I'll be home, tweeting, writing newspaper copy and trying desperately to catch up in the poor, neglected garden

This week's film mench should be Bullit, since we've walked the road where part of the famous chase took place.  But we're also two minutes walk from Union Square where Coppola's masterwork The Conversation was set.

More soon, from the Sierra Nevada where I flirted with an Arizona Lady and trod the meadow where Bambi lost his mother.  Cue tears & happy childhood dreams!