FOR GAWD'S SAKE, LEAVE THEM BE! 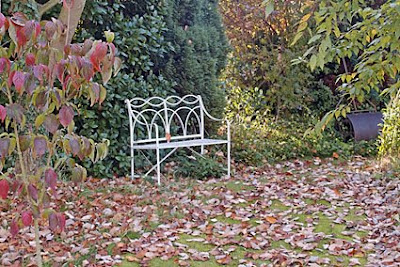 Miraculous mess - leaves on my lawn.
Here we are, in the most deliciously melancholy of seasons, watching the floral world subsiding to mush  - just as it should in October.  Colours are running through gentle changes and the sky is returning to our vistas and backdrops, as the branches become bare.  The trees seem happy to be shedding their scabrous clothes, like tired old tramps who've been offered bath and bed, and at our feet, shifting carpets of reds, browns, dun and beige rustle companionably as we walk over them. 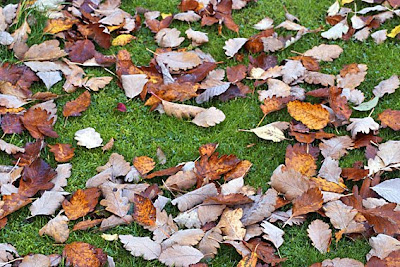 And yet all I see and hear are gardeners frenziedly raking and scraping, gathering up the unwanted harvest to pile up for leafmould or worse, to cram into their garden compost bins for the councils to remove.  Worst of all, some heap them to burn in fitful, acrid fires.  Bonfires?  They should be called malfires!
I welcome the fallen leaves, loving the changing colours and enjoying dynamism as the garden scene transforms to winter.  The lawn looks beautiful, when leaf-strewn and on my borders, even though they look untidy, I can make myself be patient and wait for rotting to begin.  That is so much easier than the alternative of raking up, composting and then forking the leafmould back onto the soil after all that unnecessary work. 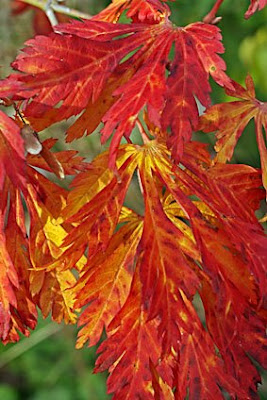 Leaf colour has been brief but brilliant for us this year.  Star trees were Acer japonicum 'Aconitifolium' (left) and Cercis canadensis 'Forest Pansy' (below.)  They took ages to turn but then, instead of lingering sweetly on the trees, succumbed to the gales and were first shattered and then scattered.
We have to re-think leaves.   They are friends, rather than enemies and we should welcome them.   In the London parks, what little peace there is gets shattered on a daily basis by loud, pointless, petrol driven leaf blowers which shift them about the grass.
Even among shrubs, instead of being allowed to lie and decay, they are feverishly hoiked out and piled up.  The process transforms them from naturally forming mulches into heaps of undesirable waste, to be disposed of rather than treasured.
Even at such conservation-minded places as the RHS Garden, Rosemoor, when I was last there, noisy blowers were shifting leaves across the lawns.
When we moved to our present garden, I was determined to run a 'slow gardening' policy with a laisser-faire approach to maintenance.  I make it a rule not to remove leaves from borders unless they are likely to damage vulnerable plants by over-lying them.  The whole place looks untidy for a while, but one learns to tolerate the mess.  The problem, I suggest, is in our heads, rather than in the leaves causing problems.  One can unclog gutters and claw matted, decaying leaves from drains or from between rocks in an Alpine garden.  But the rest can do no better than to lie, die and give their sustenance back to the soil.
The same principle goes for tidying up flower borders - but more on that anon. 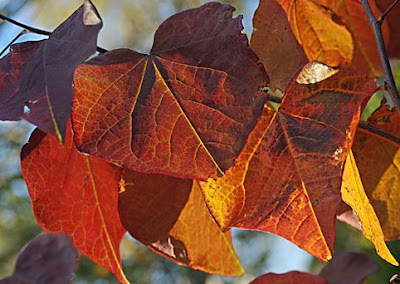