TAKE ME TO THE WINDOW, FOR A LAST LOOK AT THE MOOR! 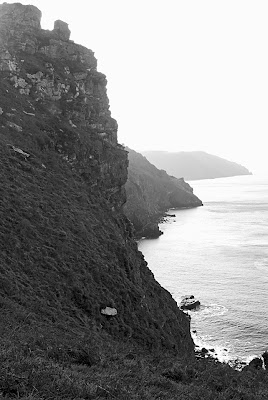 The Severn Sea, from the Valley of the Rocks.
Oh, the beauty of this place!  The last heather flowers giving little touches of purple on the uplands, the terrifying ruggedness of the coastline, the intimacy of the deep, narrow valleys with their plush green mantle of ferns, mosses, gnarled oaks and shapely rocks.  Exmoor is somewhere I've frequently driven through, but seldom been intimate with.  Every gardener should be made to come here, to sit on a rock and drink in the natural line, the intricate geometry, the subtle texture blends and the mealy-mouthed ponies. 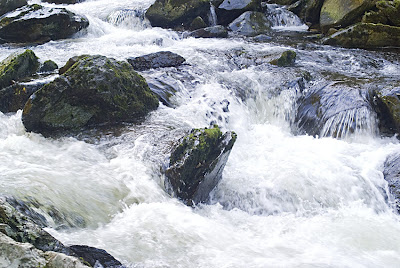 The East Lyn, above Lynmouth
I can foresee an 'important' seminar ahead, for all les Eminences Grises of the garden design world - James A-S should treat his howdy hat to a moorland excursion; Cleve should go West to view the dialogue twixt fern and rock; Monsignor Wilson - you must come to see how Nature planteth!  And at this seminar, all we'll do is sit silently, on chosen spots, and gawp.  No talking, no notes.  Just vision. 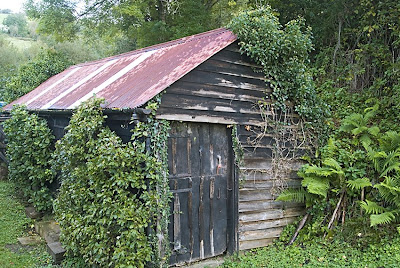 Our borrowed cottage garden shed.
There's a price to pay, for this beauty, though.  Seven days away from blogland and I'm a quivering jelly of withdrawal symptoms.  My fingers twitch for a keyboard, my heart sinks each morning, knowing that even if I boot up my laptop, I CANNOT, go on line.  Can't even send thought messages through the ether.  There's no signal for mobiles.  We've only got a phone, in the adorable cottage we've been lent, and hardly dare use that for fear of running up an unwelcome phone bill for our gracious hosts.
Being tucked away in the middle of Exmoor is adequate consolation but I still yearned for contact with the bloggist community, despite being such a newbug.  I've only blogged for a number of days, but already I'm a total addict.  Is this healthy?  Probably not, but I'm too old to care. 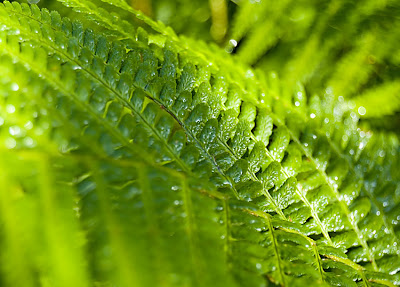 Ferns and dew - texture, colour, freshness.
I've often thought that the best parts of the two biggest west country moors are at their edges, rather than their deep interiors.  The Devon and Somerset coasts which make up the northern edge of Exmoor are some of the most rugged in England;  to the south, the transformation from hard, unyielding upland to the quilted patchwork between Exmouth and Tiverton is dramatic and stirring.
A brief visit, to Knightshayes garden, on my way home, reminds me that the design works so well, not only because of the superb, south-facing terrace, but also because of the distant views.  Autumn colour at Knightshayes and at the RHS Garden Rosemoor is wonderful.
A volunteer at Rosemoor told me that some of the visitors were really quite shocked at the daring colours in the magnificent newly installed Square Garden.   'Who would even think of putting that orange with that pink?'  was the sort of question he'd been asked.  Well, I would for a start and if it shakes up the Torygraph gardener, so much the better.  I love Rosemoor - the spirit of the place, the friendliness of the staff and welcoming feel of the garden is like no other.  And their kitchen garden is so cosy that one can relate to it.  The fan-trained bamboos there are superb, if a little spoilt by the plum trees that have been tied to them!
Earlier in the week, we walked the East Lyn Valley, from the prinked and cherished National Trust Caff at Watersmeet to the fish-and-chippy village of Lynmouth.  (I'll return to the NT in a later posting, with luck.)  The Village Inn, Lynmouth, gets the PMN Bad Taste Award for its hanging baskets - not so much horticultural decoration as floral diarrhoea. 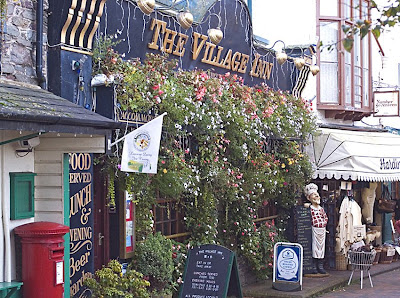 The Village Inn, Lynmouth - with tasteful street furniture.
For natural beauty, the Valley of the Rocks - a doddle of a walk along the clifftops from Lynton - takes some beating (see pic) but watch out for rather officious goats which try to butt you over the cliffs when you bend to snap a picture.  Then, a drive along to Lee Bay, Woody Bay and over the top, back into Somerset, rounds off an inspiring day.
Back at home,  where it's flat, I'm trying to re-think the garden.  How does one conjure up that soft, quilted, gentle-coloured patchwork of the Westcountry landscape, in one's backyard.  I'm sure it can be done, but haven't quite worked out how.
Posted by Plant Mad Nige at Monday, October 13, 2008