MONSTROUS CARBUNCLE OF A MEGAMINISTRY 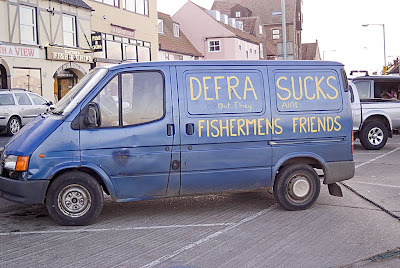 Fishing quotas have not endeared DEFRA to British fishermen.  (Words on the van, photographed on the Norfolk Coast, read:  'DEFRA SUCK's but they ain't FISHERMAN'S FRIENDS.  (Non Brits might want to know that 'Fisherman's Friends' are a brand of cough candy.  This has nothing to do with physical expressions of affection.)
First, hurrah for Obamaramarama, my out and out hero and glam noo leader (elect) of the free world! Huzzah and Gadzooks for a great geezer.  A happy piece of news to wake up to today.
But apart from that, I'm fuming!  I was guest at a lovely dinner at the Tower of London, on Monday night dining among glittering uniforms and highly distinguished bods, but after this posting, I will probably end up going back the The Tower, this time being dragged in backwards, through the Traitor's Gate.
Now then.  Pay attention while I rant, please.
A piece of news yesterday, coupled with more recent tales of woe among beekeepers (sorry, its the bloody bees again) had me leaping out of bed at 5.45 am and committing acts of extreme violence against the curtains, the tea kettle and anything else I could knock about or rip up.
Rage is an ugly thing, but not half as ugly as the hideously bloated government ministry that calls itself DEFRA.  If ever there was a dog's breakfast of a department, DEFRA is it.  Those on the other side of the puddle, in the newly Blessed and Sunlit Upland of  Obamadom, may wish to know that the acronym stands for the Department of the Environment, Food and Rural Affairs.
This Orwellesque megaministry is responsible for pretty much anything that happens outdoors or at sea.  It was a brainchild of the 1997 Blair government, the result of cobbling together most of the ministries that New Labour didn't give much of a damn about:  agriculture, fisheries, the environment, English Nature - -  you know -  the sort of un-hip, non Brit-pop muddy things that didn't float the spin doctors' boats at all.  It progressed quite quickly, from dog's breakfast to pavement pizza and by now has pretty well pissed off all farmers, fisherman, naturalists, environmentalists and a lot more folk besides.
One of DEFRA's most outstanding achievements was to be so late in making subsidy payments to farmers - more than a year overdue - that the EC imposed a massive fine.  We tax payers foot the bill for that, of course, as well as funding the subsidies for the aforementioned sons of the soil.  DEFRA also closed down a number of key research stations including one near here, where crucial research work was being carried out on the effects of climate change on our flora and fauna.
But DEFRA's latest offering takes the biscuit - literally, if you're a dog.  They've produced a document telling us pet owners how to look after our animals.  This government department is telling us  - IS TELLING US!!! - that we've got to watch for signs of stress when introducing cats to dogs.  And that we should provide separate loo facilities for each individual cat in our household.  Also, we've got to provide suitable toys and entertainment for our cats.  WHAT DID IT COST TAX PAYERS TO PRODUCE THIS TWADDLE?
I acknowledge that animal welfare is important, and that some pet owners need guidance.  But we have charities like the RSPCA who do superb work in that area and the amount of information on pet care, in all medias, is vast.
Meanwhile, this morning on BBC Radio 4's Farming Today I heard that British Bee Keepers would be demonstrating in London because British honey supplies have been so diminished that national stocks will run out by Christmas.  Our entire bee industry wants £8 million to be set aside for research into Varroa, Colony Collapse Disorder and other problems.
But DEFRA says that, 'in these difficult economic times,' it can't afford to provide that sum even though the industry is in crisis.  Eight measly million!  That's barely even a couple of Banker's salaries!
We may not produce vast quantities of honey, in Britain, but it is still an important part of our agriculture.  Our honeys are distinctive in flavour, cost little to produce and enrich the choice of quality foods at the top end of the market.  They always sell at a substantial premium, so one assumes they must be extremely popular.
It's so sad to learn that the ministry which wants to spend money telling us stuff like this:
'You should ensure that your cat has enough mental stimulation from you and from its environment to avoid boredom and frustration . . . It is your responsibility to provide opportunities for your cat to satisfy all of its behavioural needs, such as play and companionship. ..'
is not interested, at the same time,  in helping out a small but precious sector of our food production industry, not to mention, the most important of all plant pollinators, the poor, dying bees!   HARRRUMMMPHHHH!!!!
Ooooh some people do go on!  Sorry!  Sorry!!  Flowers and pretties next time, I promise!
Posted by Plant Mad Nige at Wednesday, November 05, 2008