Well, that's got the Garden Media Guild awards lunch out of the way.  What a bun fight!  It can't be healthy to have so many competitors crammed into one large room but everyone seemed to be in jolly form and it was lovely to see so many old faces - some even older than mine! 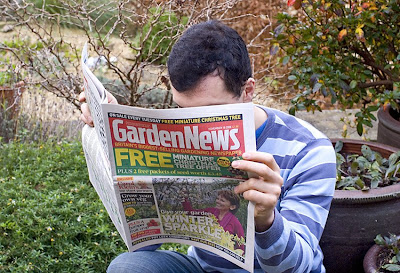 Deepest gratitude to my gracious hosts, Garden World Images who tolerated me at their table. Thank you, thank you!
The venue, the Royal Lancaster, was pretty much yer  bog standard big London hotel banquet room, but it distinguishes itself by having quite the ugliest crystal chandeliers ever devised.  These are buried in deep, rectangular, upside-down pits and are squat, non-sparkly and unbelievably heavy-looking - a perfect example of opulence overruling taste.
The food was a tad chef-tastic but despite that, not bad.  For starters, the thing resembling a miniature Egyptian fez turned out to be tomato cheesecake, mounted on a mashed up McVitie's digestive biscuit garnished with asparagine slivvers.   I wondered whether the labour cost of splitting the hundreds of asparagus spears longitudinally cancelled the savings made on having to buy less of the stuff in the first place.  (Have you noticed how, within minutes of eating asparagus, your wee smells different?  It's the result of a sort of metabolic short cut. Miraculous, innit?  But as ever, I digress!)    Guinea fowl followed and then another mini-fez, identical in texture to the first, but a paler hue and blander flavour,  this time served with a small, moist, slightly glistening thing which the menu said was poached pear.
The showmanship bit was handled deftly and wittily by the charming Andy McIndoe and the sound and visuals were good.  I suspect they used the superb Macintosh software known as Keynote, rather than the infinitely more clunky and user-hostile PowerPoint.  And the howler at the conclusion, when Michael Warren's portrait came on screen before he was named as recipient of the Lifetime Achievement Award, did not spoil things at all.  It was good to see his picture while his credentials were recited, and deeply satisfying to see such a deserving winner. Big congrats, Michael!
The rest of the awards themselves held few surprises and a lot of very, very,  familiar names cropped up in the shortlists.  But two winners were such a thrill to see that I decided then and there, that my next blog post would fete them!
First, Newspaper of the Year.  This was not a big budget, high flying National Daily - though two were in the shortlist. No, it was the previously make-d0-and-mend, now shiny sparkly and revitalised GARDEN NEWS.   And no prize could be more richly deserved!  Times had been tough, for this horticulturally superb weekly.  The paper suffered a prolonged period of uncertainty, pinched budgets, minimal publicity and downright lack of support from its previous owners, EMAP, but now, with new proprietors, seems to be flourishing. Long may it continue, and to Editor Neil Pope, Gardening Editor Clare Foggett and all the team, huge, huge, heartfelt congratulations.  (And thank you, thank you for renewing my contract!)
I've left my other top, top fave award until last:  Jacques - Le Chapeau - A-S.  received a surprise award for top blog.  This is the man who inspired me to leap into the blogosphere with my own lame, faltering offerings.  He had nagged me to visit his blog for ages, but I never did - idle bastard that I am.  But one day, when Googling for something completely different, I stumbled on the Blackpitts blog and wasted the next hour or so, immersed in J A-S's outrageously funny, wicked, wonderful prose and longed to see more of his enchanting images.  Witty, wise, wicked - no wonder I was caught and held fluttering like Pieris brassicae in a cobweb.  So, James, if I had a hat as big as yours, I'd lift it high in your honour!  As it is, I have to be content to tug what old age, male pattern baldness and my barber have left me to serve as a forelock. 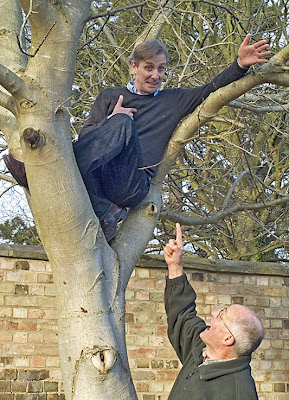 Blogger extraordinary - up a gum tree, as usual.
Posted by Plant Mad Nige at Friday, November 21, 2008