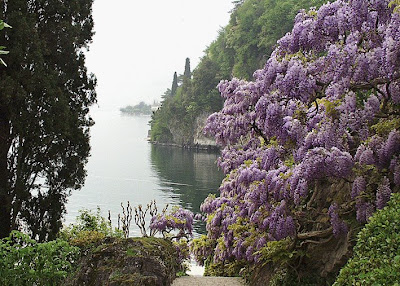 Soft, misty  light on Lake Como, from gardens of the Villa Balbianello
Ahoy there, me hearties!  The sharper eyed among you will have spotted a couple of new links to the right of this post.  The pictures are rather old, taken with an early digital camera and not that good.  Sorry about that, but I hope they give you a taster.
There was a time, a year or two ago, when I seemed to be spending more time travelling with people abroad, than gardening at home.  At the height if this journeyman existence, a few wags even used to greet me as 'Admiral,' on account of all the ocean cruises.  'Idiot Seaman' would have been more apt and anyway, a lot of the travel was overland and much was in search of wildlife, rather than gardens.
Being elected to the Council of the Royal Horticultural Society clipped my wings somewhat, because of big new calls on my time,  but I still get abroad when I can. So when the respected, rather swish travel company Cox and King invited me to to host two garden tours in 2009, I was absolutely thrilled.  We 'do' the Italian Lakes, in April and Australia in October.
More about Oz another day, but the spring trip to Lakes Como and Maggiore should be an absolute belter!  The last time I went was in April when the wisterias were all at their best, azaleas flourished and each stately villa was perfectly prinked and prettied for spring perfection.  (Wonderful to alliterate to such excess without a nasty editor to hit me!) 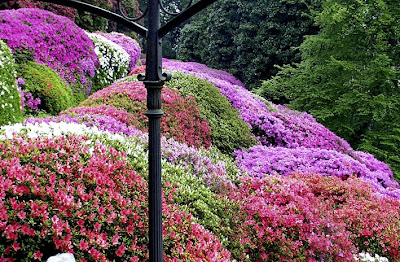 Azaleas at the Villa Carlotta, Menaggio, on Lake Como
The island gardens in Maggiore, particularly Isola Bella, are seared into my memory.  How romantic, to take over an entire island - there's a feeling of Swallows and Amazons about the boat trip across - and convert it into the most lavishly statued, terraced, parterred and planted paradise.  You can hear, in your mind's ear, glorious arias from Verdi or Rossini, as you wander among the cypresses.  There are regal steps, with a potted and clipped box bobble on every one, going plink plonk plink plonk, all the way down, while a rude American dogwood, in riotous pink  blossom throws loud informality into the Italian chic.
In one villa, we wandered beyond the formal gardens - more clipped box and rectangular pools - into woodland where nightingales and yellow warblers sang, and where Paris quadrifolia and Melittis melissophyllum (known in Britain as Bastard Balm, for heaven's sake!) flowered in massive clumps.
The grounds of the Villa Carlotta, in Menaggio, were riotously coloured by massed planting of Japanese azaleas.  The Italians have a superbly creative approach to pruning, and had sculpted living landscapes with these, so that they merged and blended into each other with bumps and knolls and valleys. Cynics amongst us felt that they might look a bit better when all the violent colour had gone, just leaving the shapes, but for us Philistines, they were fab de luxe - sorry, I meant fabuloso di lusso maximo. 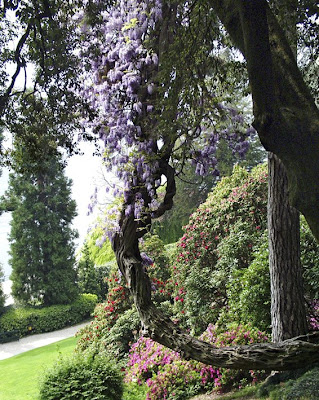 An ancient wisteria, bigger than the pine tree which 'supports' it.
I fell for the small lakeside towns of on Como, particularly Belaggio and Menaggio.  So close to Switzerland and yet, so absolutely northern Italian, with relaxed restaurants and bars, pretty vernacular architecture and always the the lake and mountains as a backdrop.
We dined magnificently on such local delicacies as Lavarello - a lake-dwelling relative of the trout, but with sweeter flesh - and sipped many a glass of pert northern Italian wine.  I can't wait to go again, and late April is the absolute key time. The weather will have warmed, but the landscape and the gardens will still have that crisp freshness so treasured in all Mediterranean countries.
And the beauty of this trip, from your point of view, is that you don't have to put up with me, if you decide to go. The magnificently knowledgeable, friendly, enthusiastic and delightful Roy Lancaster is hosting a tour just before mine, so you can take your pick.  For details, click on the links in 'Handy Information,' above, right. 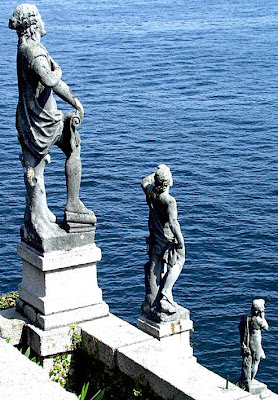 Statues on the Isola Bella, Lake Maggiore.
This weeks big film, for us, was The Ice Storm, directed by Ang Lee, set in the 197os but made in 1997.  It's about terrible weather, wife-swapping and sexual experimentation  for all ages, most of it ending in disaster.  As well as smartly played parts by Sigourney Weaver and Kevin Kline, it had a cameo played by the magnificent and deeply adored Alison Janney.   What? Ask any fan of The West Wing!
I'm listening to the fan on my Apple PowerMac G5, which sounds a little grumpy.  The computer's getting old, but what a monsta!  A veritable Bentley-Porsche-Ferrari hybrid, for speed and class.
This day las year, according to my diary, several snowdrops and two winter aconites were in flower and I spent part of the day installing swanky, new MAC OS 10.4  Seems like last week, but now MAC OS 10.5 makes it look almost as laughably old fashioned as - I was going to say Windows, but it could never have been that creaky, could it?
Posted by Plant Mad Nige at Monday, January 12, 2009