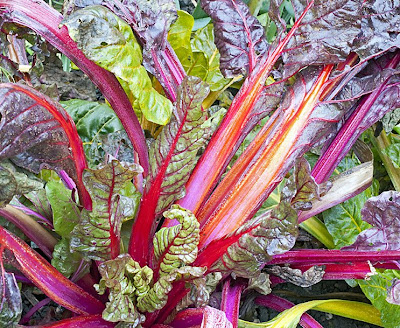 Colour in surprising places:
Our rhubarb chard, not only still pretty, but beginning to produce a few succulent new leaves. There's always a last, late winter bite, from this versatile spinach, even though the seed for this was sown as long ago as last April!

Well!  There I was, having breakfast with Alan Titchmarsh.  No, really, it's true.  It was on Friday, up at the RHS Garden Harlow Carr and I was there to witness him 'turning the first sod' to launch the the new all-green, carbon-lovely, environmentally-adorable Learning Centre. To be built out of knitted nettle stalks and powered by the famously radiant Yorkshire charm, this building will set new standards in this person's favourite word, sustainability.  And of course, it has a sedum roof, so it must be sustainable.
Somebody, rather unkindly in my view, asked me whether I was the 'first sod' in question and I was able to tell him, 'far from it,' indeed, by the looks of the churned up earth and fencing, many a sod had already been tumbled, on that particular spot. Alan's role, it seemed, was to be purely symbolic.
Before the event, over bacon, croissants and exquisitely aromatic coffee in Betty's Restaurant, we discussed horticulture as a career.  A chap from Yorkshire Forward, asked Alan why there weren't any celebrity gardeners who behaved like the more frenetic or foul-mouthed TV chefs. 'Gardening just isn't like that, ' he explained, and went on to describe  how serene gardeners were in comparison.
'That's because we all know that its hopeless,' I suggested. 'When a magnolia you planted 26 years ago as a seedling, flowers for the first time but is ruined by an April frost, you either find your sense of humour, or you give up.'  Alan's most telling point, at that breakfast, was that although qualifications and degrees in horticulture are highly important, it is longstanding practical experience that really makes a good gardener.  Hear, hear!
When the formal proceedings were done, and the nettle-knitting could thereby resume, I persuaded the management to let me have a sneak preview of the superb new Alpine House at Harlow Carr.  Built in the classic style - no Kew Coathanger nonsense up here - this one has a steep-pitched roof with good, old fashioned crank handle ventilators all along the top and in double rows down each side.  The rock work is made up from recycled sandstone, from the superannuated and formerly horse-tail-ridden Sandstone Rock Garden lower down in the valley.   They are using shredded tyres as backfill, for the raised beds so instead of there being an earthy, rooty, limestony aroma, the atmosphere was similar to being inside a balloon, or perhaps, a condom - not that I've ever been in either, you understand; well, not all of me, anyway.
Yorkshire was the home of the mighty Reginald Farrer, father and Patron Saint of Alpine Gardening and an even more verbose and flowery writer than the hack wot churns out this rubbishy blog. So it is absolutely mete, right and our bounden duty to have an Alpine House of which he would have been proud.  While standing in the strangely echoing, empty building, I could feel his ghost, smiling benignly over my shoulder, and could almost - above the noisome rubbery miasma - hear the scratch of his pen, as he dashed out some more gushing prose.
I know you're thinking 'wot, no pictures?'  But have patience.  I'll do them one day soon, I promise!
On another tack, I was listening to  Gardeners' Question Time which surprised me by turning up on a Friday afternoon, rather than Wednesday.  A woman had watered her plants with liquor from her compost bin and had, not surprisingly, killed them all.  She wondered whether there might be a way of testing the evil-looking liquid to find out what levels of nutrients it contained.
Bob Flowerdew was invited to answer and I thought he would mention a testing kit like this. But he had a much more surprising approach:  First, you have to find some living duckweed.  A challenge, in January, I'd have thought!  Then, if I remember correctly, you fill a bucket of the liquor diluted to suit.  Next, you count out twenty teeny tiny duckweed plants - each one being wet and sticky  - and you float them on the surface of the bucketful of liquor. Memory fails me from that point, so I'm not sure what you were supposed to do next.  I think it involved a control, and you had to count the number of duckweeds after a specific interval to quantify their fecundity.  But by then I was losing the will to live - not healthy when driving on the A1 M just south of Doncaster!
I don't know whether there's a podcast available or not, but I'd love to know if anyone has tried this, or can even name an authoritative source for analysis by duckweed. 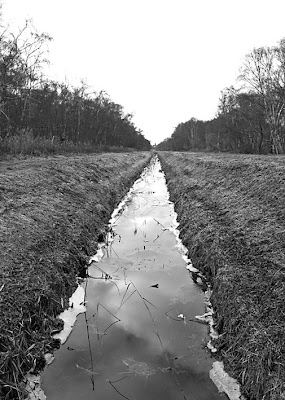 A frosty dyke at Holme Fen - Britain's lowest point.
Altitude, here, is below sea level.
I had planned to tell you about my visit to England's largest birch wood at Holme Fen, but that will have to wait until next time.  I was staggered by the beauty of the place, and can't wait to take you on a stroll through.   Meanwhile . . .
I'm listening to Brahms' 'Cello Sonata No 1 Op. 38  Wonderful chuntering of the 'cello when the piano takes up the melody - like an old soak at a pub with a centimetre of beer in his mug and gone grumpy because no one will fill it for him.
I've just read Pat Barker's latest novel, Life Class about an art student turned Red Cross ambulance driver in 1914 Ypres.  It starts a little haltingly but soon gathers pace, deftness and, as always with her work, burgeons with intriguing subtleties and ambiguities.  I was inspired by her winning the Booker for Regeneration and have enjoyed all she has written.
This week's film was the Korean Chinjeolhan geumjassi (Lady Vengeance) a harrowing piece with slaughterhouse violence, too good to dismiss as purely gratuitous but you need a strong stomach.  It was directed by Chan-Wook Park
This day in 2006 I was in Norfolk, watching tens of thousands of pink foot and brent geese flighting in to roost on the saltmarshes and taking a break from writing a book about Wisley.
Gawd, this post is wa-a-a-a-ay too long.  Sorry for that, and goodley bye!
Posted by Plant Mad Nige at Monday, January 26, 2009