I'm absolutely shocked, horrified, appalled, amazed, gobsmacked!   My ghast is truly flabbered and I have to admit, too, that my shame runs deep, dark and bitter.
Firstly, the shame.  It's been so many days since I dipped a toe into the wonderfully Oz-like nation of Bloglandia that other people's posts have built up to a terrifying backlog, on my home page. (That's Wizard of Oz, by the way, not the big, beautiful country 'down under' which claims to have a slight talent at Cricket.)   I must read them all - the posts, that is -  the moment I've finished this.
Secondly, I can hardly believe that so much time has gone by since the last bout of frenzied ranting, so politely referred to by certain persons as 'colborning.'  Well, I'll soon put that right! Here goes: 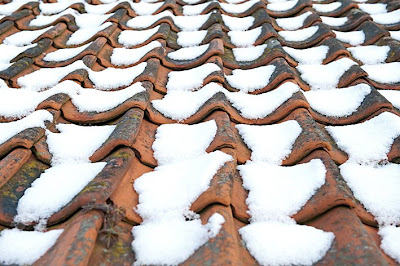 The consequences of yesterdays 'Major Snow Event'
Our shed roof was partially covered with snow!  Shot at 8 am today.
So that was what the Met Office call a 'Major Snow Event?'  ARE THEY HAVING A LAUGH??? A snowflake falls. And then, before it has a chance to melt, another one lands on top of it and suddenly, everything south of Watford comes to a juddering standstill. The entire London Underground stops, in case a flake might blow into one of the tunnels and fuse the electrics.   Aeroplanes are grounded, buses are locked in their garages, Schools, everywhere, take a day off so the kids can sit at their computers at home. (My broadband ground to a halt yesterday, as if to prove the point.)
Meanwhile pressmen with cameras scour the parks, downs and uplands of the Home Counties in the hopes of finding some of the aforementioned children having been frogmarched outdoors by parents - prevented from working by the collapsed transport system - to go tobogganing or snowballing, or building really crap snowmen. None of the snowmen I saw would have a hope in hell of flying, with or without the help of Raymond Briggs or Aled Jones.
So the evening news bulletins were full of jolly snowballers and chirruping children on sledges. Aaah, bless!!!    Mmmmmrrrggghhhhhhh!  They should have been at school, doing Double Maths and their parents should have been hard at work, beating the Credit Crunch and helping to rescue my beleagured pension!   And to cap it all, on Channel Four News, not only were we treated to wise utterances from the current Mayor of Lunnon - he who resembles a bit of a snowman himself - but also his newt-loving predecessor.  Neither was very edifying; neither could explain why a little winter weather had brought the World's Financial Capital to a juddering, quivering, shivering standstill.
No wonder people in Switzerland, Canada, Upstate New York and other snowy places laugh at us.  If the amount of snow that hit Surrey, yesterday, had fallen in Buffalo or Milwaukee, the locals would wonder what had caused the winter drought.
I'm going to calm down, now, and read all your lovely posts.  Then I'll get back to something loosely connected with nature and gardens.  If you've read this far, you're an absolute saint and I love you for your patience.
I'm listening to Charles Mingus, live, at Cornell University - recorded 1964 - and it isn't helping my mood one bit.
This week's film was Clint Eastwood's absolute cracker of story Dirty Harry.  'Do you feel lucky, Punk?
This day last year was a Sunday and we dined on Roast Pheasant - a geriatric bird, apparently, which appeared to have been shot at 12 feet range.  We also ate the last of the Christmas cake.
Posted by Plant Mad Nige at Tuesday, February 03, 2009