Travel is less to do with geography than with one's state of mind. Trips to far flung places are exciting to plan and exploring exotic places and, of course, foreign gardens is all very wonderful and jolly. 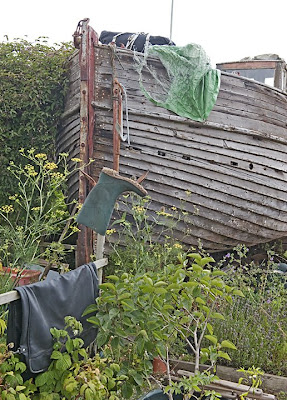 On the Faversham Marshes. Peggoty's house, from David Copperfield? Peter Grimes's hut? No, it's just a knackered old boat but set in a garden with alluring sculptures. Do we spot a Derek Jarman influence here?
Food and drink is, in itself, a form of travel. You soon settle to local customs and learn to accept them. In Malaysia, for instance, pretty well every recipe includes at least one hard-boiled egg. In Spain you soon learn that tapas are not gourmet delights, to be enjoyed as food per se, but are there mop up, internally, some of the wine you consumed in the first place to fertilise good conversation.
French food is magnificent, but their breakfasts are disappointing non-events; English ones kill you unless you indulge in them only on rare occasions but a well-honed, thoughtfully composed American breakfast is an utterly delicious, comforting, sustaining feast, designed to set you up for a day's hard labour, and to take away the pain with mild but aromatic coffee and nursery mixtures such as crisp, streaky bacon, light waffles and real maple syrup. None of that Aunt Jemima travesty! 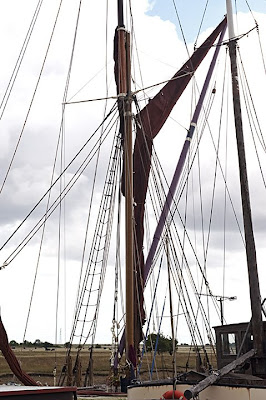 Dickensian rigging - a wherry on Faversham Creek
But back to travel. Ahem, where was I? Ooh ah! For me, the best travel is to places where the inner part of one's being connects emotionally with where one is.
Going to my brother's house in Faversham, for example, is as delightful an adventure for me, as a week end in Paris or a bird watching expedition to the Zapata Marshes in Cuba. There are always the warmest of welcomes from my host and his wife; the town has its own brewery where they brew proper English ale; the local wildlife is fascinating but above all, we are in the land of my current fave Victorian writer, Charles Dickens. What more could a body want? 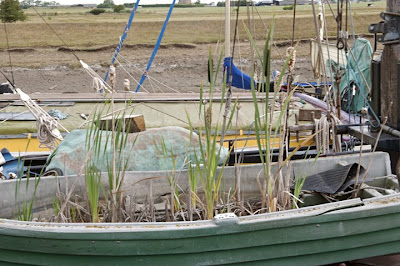 Unlike the top boat, this garden is a bit impromptu. The reed mace obviously planted itself in the boat. Not sure I'd want to sail with the geezer who owns this. I'd suspect his seamanship.
My Bro's garden is tiny, but packed with the most wonderful plants, all in immaculate health and beauty, every one arranged in ways which would please even Beth Chatto or those two wonderful ladies Pam and Sibylle, who were joint head gardeners at Sissinghurst, when La Sackville West was still there. 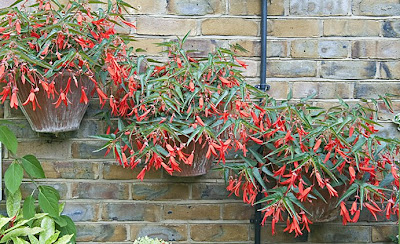 No flight of ducks for my Brother. He graces his walls with Begonia bolivensis 'Firecracker' instead. We both love this plant but our better halves, I suspect, like it less. The PG has actually been quite rude about my specimen.
He regards any container, however modest, as an unlimited opportunity for more colour, fragrance and beauty. He plants injudiciously - no, let's say daringly - but always gets away with it. Big, Cornus alba, for instance, grow in tubs at the front of his house. A Liquidambar styraciflua, for goodness sakes, and a vast wall of climbers, grow in the tiny back courtyard.
There are camellias, oleanders, hydrangeas, scads of perennials, spring bulbs, winter berries - you name it, and it's probably there! Anyone with less sense of 'right plant for right spot' would have created a mess, but his garden is an exemplar of best use of small spaces. 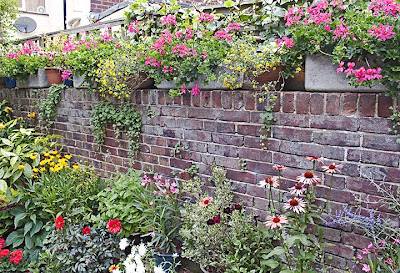 Summer jollies along the boundary wall of my brother's courtyard garden.
The pictures do nothing to back up what I've written and I feel wretched about that. (The PG didn't join me on this trip.)
The Faversham street where he lives, with my equally able and supremely hospitable Sister-in-Law, is one of the most elegant and charming in Britain. Every building has architectural value and the pavements are furnished with real stone.
The street trees were lovely but sadly, some were removed, recently, and replaced with small amelanchiers. Town planners should be bolder with their street tree planting. Vehicles should make way for trees - not the other way round. And if the fallen leaves are messy, stop whining, clear them up and make leaf-mould of them. But I rant! Ahem ahem. Calm down at once! 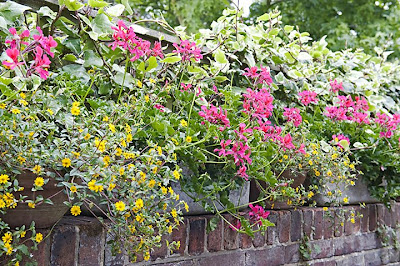 More pretties on the wall top.
As as one walks the length of this street - one Charled Dickens assuredly trod - one travels from the centre of the old town to the tiny harbour and creak. This is where hints of Dickens' stories bring a sharpness and shudder to the genteel Kentish landscape. The Swale Estuary is here, with saltmarshes, old boats, modest huts with little gardens near more upturned boats, sailing wherries and big, flat, open spaces. One thinks of Great Expectations, Our Mutual Friend and the Suffolk bits of David Copperfield.
On my visit, I offered to treat my hosts to a dinner somewhere special. They chose The Sportsman, a desperate-looking pub at Seasalter, further down the Swale, where Romans once extracted salt from the sea.
The pub is exactly like the one described early in Great Expectations - isolated, in the marshes, by a sea wall. Instead of blossoms on the tables, they had arranged little vases of marsh plants - Phragmites reed, wild carrot, sea aster etc.
The beer, brewed in Faversham by Shepherd Neame, was good - warm, by world standards, but hoppy and bouncy with natural life, rather than CO2 forced in from a cylinder. The food was sublime and the company fun. I ate six huge raw oysters - despite there being no 'R' in the month - each with a tiny disc of frazzled chorizo on top, followed by a goodish hunk of gently poached turbot. Distinctly yummy. 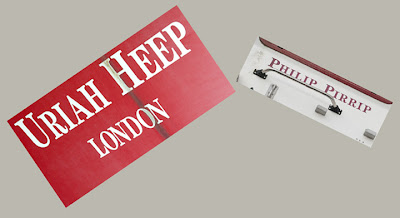 Dickens characters borrowed as boat names on the Swale.
I'm listening to the third Ashes test limping towards a disappointing draw.
In the garden, I'm weeding like mad. I took heed of James A-S's advice and ignored the little weeds, in spring. Now they are three metres high and the nettles sting like vipers. Something vile, possibly thrips, is nibbling our beautiful dahlias and the slugs and snails bring tears to my eyes. Nothing is safe from those little bastards.
This day in 1991 we were enjoying a hot day. I was summer pruning the apples and wrote this in my diary: I've never seen such an apple crop. The Worcester Pearmain is positively bowed down with fruit. I had to thin once before, and today, I thinned apples again, scattering fruit all over the grass. The trees all look a bit butchered, at the moment. Have I got the pruning wrong?
This week's film was Sixth Sense, in which Bruce Willis, is the antithesis of an 'action man' and plays the part of a child psychiatrist with remarkable sensitivity and poise. The child actor Haley Joel Osment was staggeringly convincing, too. This film should have been more raved about than it was, when made in the late 1990s.
Whoops - another interminable and boring post. If you've read this far you deserve a medal, not to mention my grateful thanks. Bye bye!
Posted by Plant Mad Nige at Monday, August 03, 2009