MARROWS ARE MY BIG GUNS: THE COURGETTES MERELY INFANTRY.


I have fallen off my bike and damaged it but apart from bruises, a sprained wrist, dented helmet and embarrassment, am fine.


Our darling swallows have hatched off four young which are now flying slightly inexpertly about in a northeasterly wind.  They are also turning the narrow passage between our yard and garden into a tunnel of ordure - but we're honoured, rather than offended.  It can be hosed down when the birds have flown to Cape Town.


We have eaten the season's first home grown tomatoes and delicious they are!  I've also scrumped wild cherries from a garden in the village because the owner says they're sour and nasty.  They're deliciously bitter-sweet, tasting of maraschino, but tiny.


As so often happens, the pictures on this post bear no relation whatever to the text. The joy of not having a strict editor is a mixed one but I hope you get double value from this illogical way of doing things. 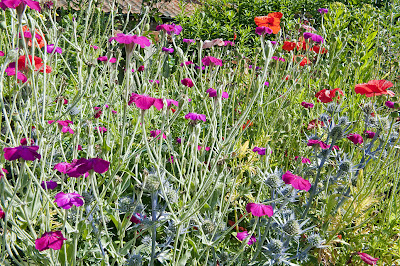 Cheap, speedy colour, in my autumn border, with Lychnis coronaria and assorted forms of Papaver rhoeas.  This is almost as pretty as the autumn perennials show which will get going in about 6 weeks.
(CLICK ON PICTURES FOR A BIGGER VIEW.)
NOW, NOW!   YOUR ATTENTION, PLEASE!!
I was going to tell you about the RHS International Trials Conference which happened last week but I’ve just been listening to Tim Richardson – author of Avant Gardeners – on BBC Radio 4’s Today programme. He was theorising about the political battlefields that gardens were and still are. (If you don't know his work, you might want a glance at the nicely turned piece here.)
Anyway, Tim R was suggesting that mighty British gardens such as Stowe and Stourhead, were biting satires on political situations of the day.  Lord Cobham, developer of Stowe in the early 1700s, was an old soldier and disenchanted Whig who had it in for the government of his day.  His garden was a demonstration of his disgust - perhaps even an expression of treason.  (You'll find an NT dumbed down history of Stowe here.)
He also suggested that public parks are designed as demonstrations of oppression.  Being well ordered and stately, furnished with plants looted from the British Empire and presided over by big statues of such personages as Queen Victoria, they're there to keep the populace in order. 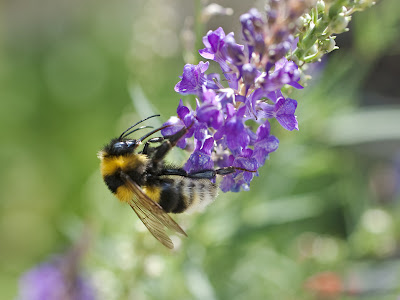 We've enjoyed huge numbers of bees, in the garden this summer.  They love this purple toadflax almost as much as lavender.
Well pardon me, but I always thought that the inspiration to create public parks, in Britain, was the precise opposite of that.  John Claudius Loudon, a great horticultural philanthropist who died in 1843, championed the creation of landscaped public spaces where ordinary people might take pleasure and relief from the sooty, smutty city environment.
It was Loudon who also developed ideal designs for model labourers' cottages, on large estates, and who insisted that such employees should have private gardens large enough to grow crops and keep livestock.
And it was Loudon who brought a breath of country air into London’s squares, by planting them with trees and shrubs.  Anyone less bellicose or oppressive than Loudon, or his great friend Joseph Paxton, would be hard to find. 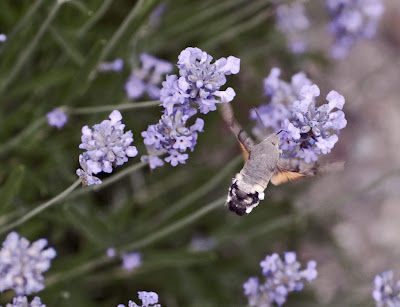 Hummingbird Hawk Moths Macroglossum stellatarum are constant visitors in our garden.  We counted five at once yesterday.
There’s no doubt that rebels and independent-thinking folk will do things in their gardens that may express contempt, or that might be intended to deliver strong messages.   After all, gardening is an art, and art is a means of expression - otherwise it’s pointless.
For example, I admit to being tardy with trimming my roadside hedge and verge as a demonstration that wildflowers look prettier and are more biodiverse than groomed grass.  And I won’t pull the self-sown chicory up in my drive, partly because I know that it irritates persons in our village who are afflicted with excessive tidiness. 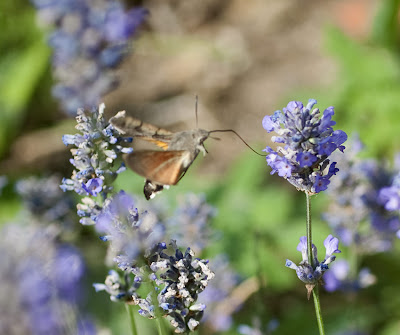 Imagine the aerodynamics involved here, and the accuracy needed to extend a probiscis into the tiny opening of a lavender flower, and while stationary, on the wing.  Amazing!
Tim Richardson made a strong and convincing argument, on the radio, and I could visualise millions of Daily Telegraph-reading Radio 4 listeners nodding in hearty approval as they spread Tiptree Tawny marmalade onto their granary toast.
But I tire of the current trend to try to make gardens something they are not.  Gardens are gardens are gardens.  They're outdoor places where you grow things.  And like any space, they can be substrates for design, and for artistic expression.  But if they do not contain living plants, they are not gardens.  A garden is a place where plants are grown. You can create an outdoor installation, if you feel so minded.  But if it doesn't grow things, it isn't a garden.
And I'm also sick, by the way, of the erroneous notion that garden designers are at war with those of us who garden, but who may be a bit crap at artistic expression, even though we love art.
It's a stupid concept and arguing the toss about whether plant husbandry is more important or less, than artistic accomplishment in outdoor spaces, is about as fatuous and self-harming as trying to drink the Thames dry.
And before anyone calls me a Luddite stick-in-the-mud grumpy leek grower, I’d like to say that I believe the idea of Conceptual Gardens at Hampton Court was brilliant, even though, for years, they baffled horticulturally minded judges.  And indeed, it was I who suggested that Conceptual Gardens should be judged, not by garden judges, but by persons from the Arts world. Though there needs to be a qualified horticulturist present to make sure the designers’ offerings would actually work as gardens in real life, rather than for merely looking fabulous for 5 days at a show.  (I urge you to read Victoria Summerley's brilliant piece in the Independent, here.) 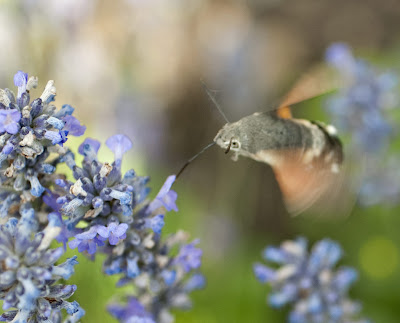 If you click on this, you can see the eye - it's a compound one, of course, but you can clearly see what excellent vision this insect must have.
I will be listening to Michel Thomas' German Course.  An attempt to converse with a Berliner in his or her native tongue, when I go in September, will immensely satisfying, even it it's only to order a beer rather than to explain that our postillion managed to escape being struck by lightning.
This Day in 1984 The PG, our four twins and I were driving through France without reservations and the only the loosest of plans.  We travelled to Evreux, Chartres, Blois and finally to Montrichard, in the Touraine which we liked.  We stayed in the village of Thésée, near Saint Aignon, and the children and I swam daily in the river Cher.  It was heavenly, and the auberge where we stayed served delicious Touraine cuisine including eels and pike cooked in various ways.
It was near there that I gathered seed of wild cornflowers.  I still have that particular strain which I sow, or allow to self seed every year. It is flowering gloriously here, as I write, 27 years later.
This week's film was Driving Lessons with Rupert Grint, Laura Linney and directed by Jeremy Brock.  I was persuaded by my brother to try it and despite some disappointing flaws in the screenplay, I greatly enjoyed it.  I even wrote an extremely pompous review which you'll find here. 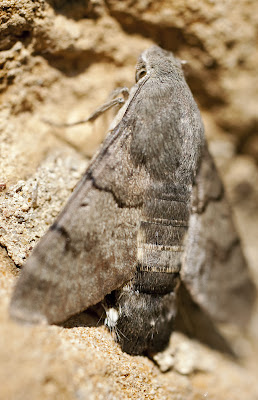 Unusual sight - a Hummingbird Hawk Moth resting on our wall.
Bye bye - and thank you SO much for reading this far.  You deserve a decoration for endurance.
Posted by Plant Mad Nige at Wednesday, July 13, 2011