Good grief, can it be July already?
A Happy New Month to you all, and may the weather be less utterly bastardly to you, this month, than it was in June.  What a perfectly putrid 30 days!  Couldn't make up its mind, down our particular kink in the lane, whether to be a fridge, a blow drier or an oven.  It was the wind that was most hateful and that's still blowing as I write. 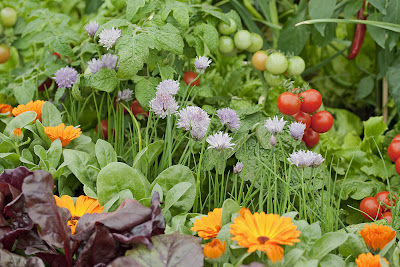 Why doesn't my own pitiful vegetable garden look this pretty?  Answer - this one is a mock-up for a flower show. [As always, CLICK ON ANY PICTURE TO MAKE IT BIGGER.]

1. WHY are Britain's supermarkets so absolutely bloody awful?

Since the PG has been convalescing from her surgery, and forbidden to drive, I've been chauffeuring her to and from various Sainsco, Waitrissons and Marks Expensives and helping her with routine victualling exercises.

Although I frequently pop in and out of such soulless places, I haven't gone through the whole intricate process of pricing, selecting, carting and packing a week's worth of groceries for a very long time, other than in France - but more of that in mo.

The first and most obvious thing to hit me like a sledgehammer was the cost.  I've always reckoned that with Government Statistics, the golden rule is to note the official figure and double it.  Thus, if the official rate of inflation is about 4.5%, as it is at present, the real rate is at least 9%.  But when I paid something like  £1.49 for a tiny packet of skinny broccoli spears and £1.25 for a cauliflower, I realised that even my GSIF (Government Statistics Interpretation Formula) is faulty.

The last cauliflower I bought was in, I think, October, and was from a small trader in the neighbouring village.  It cost 25p and had been grown less than 3 miles away.  So cauliflower inflation, here in Lincolnshire is around 500%

But once I'd recovered from the cauterising prices - and one has to admit, those aren't entirely the fault of the egregious oligopoly that owns and runs Britain's supermarkets - it dawned on me that the place I was in was not where I wanted to be. Not at all. Standing in a street in a force 8 gale with driving rain, noxious exhaust fumes and a burst sewer main up-wind might have afforded more pleasure than being in that awful barn of a supermarket.  They ought to call them infernomarkets.  I had to resist the burning impulse to abandon my half full trolley and, well, just run.

Wheeling the thing down those aisles of sterile opulence, I began to realise how limited British supermarkets are.  For example, out of the zillions of cheeses on display, I failed to find a single one made with unpasteurised milk.  And although there were at least four kinds of melon, not one was fit to eat.  Not only were they unripe but they had no hope of ripening. Ever.  They'd been harvested too young and would stay rock hard and odourless for weeks, and then suddenly decay and stink. 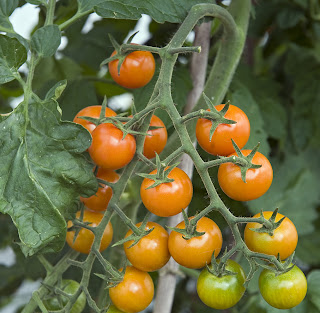 My own 'Sungold'  tomatoes, but last year's.  Supermarket tomatoes, in Britain, are bland and unappetising, despite looking uniform and gorgeous.


We do we Brits tolerate such crap produce?  Why can't we buy seeded grapes that have flavour?  Or peaches in edible condition?  Or plums that have juice?  Or tomatoes that may not look beautiful but taste?  Why do supermarket meat counters bring on a death wish and why is supermarket bread like fluffed up cardboard?

Nip through the Channel Tunnel to the Carrefour at Coquelles, or drive on to the nearest Auchan and you can buy beautifully ripe melons by the sackful.   For next to nothing, you can buy a huge, old hen ready for casseroling or traditional Poule au Pot.  You'll find any offals you might need, too, and the cheese department staff will discuss the merits of their wares, both pasteurised and untreated, in detail and with knowledge.  The pâtés will taste good, rather than like high class cat food and there will be about fifty to choose from.  And that's just a supermarket, in France.

An old lady in Carrefour once found me fondling the melons and looking perplexed.  She took pity and showed me how to choose.  'C'est pour aujourd'hui ou demain?' she asked. I said I'd like one ready to eatl  So she got stuck in and began to weighed the fruits in her hands, telling me one must pick the heaviest because weight means maturity and therefore sweetness.  And one must then smell the blossom end. If it's alcoholic, it's too far gone.  If aromatic, and if the melon gives a little, when gently pressed, it is ready.

The poor PG has another couple of weeks before she can drive.  I hope my ranting doesn't drive her too nuts in that time.  Anyway today, we're off to a farmer's market.  Now we're talking! 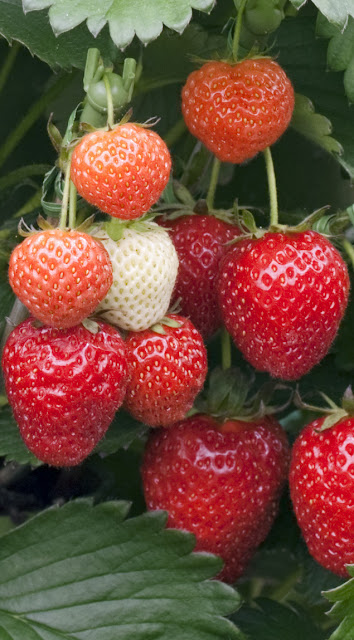 Death of the strawberry.  I haven't bought a strawberry with flavour, in Britain, for about 30 years.

Rant number two will be briefer, I promise.

Who, I'd like to know, is responsible for the death of the English Strawberry?

It simply isn't possible, now, to buy strawberries that taste really good.  Oh, they look all right.  Some of the supermarket ones look gorgous.  But they taste of slightly acidulated water and have the texture of baby turnips.

As a soft fruit, strawberries never were outstanding, unless you could find them ripened to a red perfection. In that almost unheard of state, they should NEVER be washed, and must be eaten while still sun-warmed.  If you ever felt the need to add sugar, the strawberries were substandard, and the very thought of polluting such gorgeous fruit with cream should would have been as unthinkable as farting at the Queen's Chelsea drinks reception.

I suppose infernomarkets are guilty here, too, just as they're guilty for buggering up grapes.  If a strawberry picked in Wisbech  has to be trucked to, say, Spalding, for packing, and then trundled down to Plymouth or up to Newcastle, to be thumped down on Sainsco's produce shelves, it needs to have more staying power than a Rugby forward.

When I was a boy, we would buy fresh strawberries, on Ely or Cambridge market and if you didn't eat them within about 6 hours, they would deteriorate.

Then came Elsanta, the most horrible variety ever bred.  Even the word is worse than swearing. Elsanta!  Elsinner would be more apt, or 'Elstinka.' A mockery of a strawberry.  Shiny, red, conveniently sized and oh so tempting in the punnet.  It even smells like a beautiful, ripe strawberry.  But when you pop this travesty into your mouth, the disappointment is so keen that you're likely to become traumatised.

It's such  a shame.  I used to love strawberries.  Now I never eat them because I can't grow them, and because no one sells decent ones any more.  Pity.

I'm listening to Abba for some bizarre reason.  Fernando.

This day in 2006 I was gathering yellow rattle seeds from a certain location not far from here.  Our minimeadow benefited hugely from them and we now have a thriving colony of the semi-parasite.

This week's film was Nightwatch. Nattevagten. A nicely turned, grizzly nasty about necrophilia, student pranks and serial murder.  I expected to be revolted, but it was handled with great skill by writer director Ole Bornedal and above all, it starred the peerlessly marvellous Sofie Grabol, who is so good in The Killing.


Byee! And thanks for listening.