MIRO, MIRO, ON THE WALL

FIRST, A NEW IDEA:  A fun but completely pointless 'Who said that?' series.

On each post, there'll be a quote from a well-known film.  The first person to say which film it's from will be rewarded by an electronic waft of floral delight.  If you get the name of the speaker and the listener, you might even recieve one of Apple-Burberry's newest, sparkliest gadget, the iClapp and thereby store your moments of triumph on a sleek, envy-arousing gizmo. You can play them back to yourself whenever you reach a low point and need cheering up.

Who said:
'We have the motive, which is money, and the body, which is dead'
And a bonus point if you can name the person(s) to whom it was said. 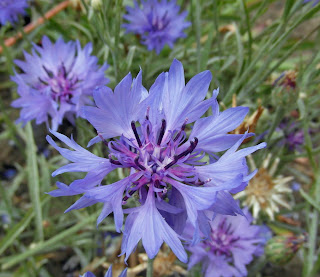 My wild cornflowers, Centaurea cyanus.  The plants in my garden originate from seed collected nearly thirty years ago – from the wild, in the Touraine, France – and have been propagated by me every year since.  I brought seed to our new home when we moved. Truly wild cornflowers are deep, sapphire blue, single and are smaller, thinner stemmed and lighter than the galumphing things you get from packets of seeds.  They fade to this paler blue when the season has advanced and the plants are growing old.
CLICK ON ANY PIC TO ENLARGE
Now then, where were we . . . . Oh, yes,

My good friend James Alexander Sinclair confesses to an attack of August lethargy in a recent post and how right he is.  Three weeks ago, I was eating my heart out about the sow thistle seeds blowing across our autumn border and trying to pull up as many of the plants as I could reach; today, I've just been gazing at them in a dreamy trance.  I blame the late J. A. Baker, whose exquisite nature book The Peregrine is an exquisitely minute study of the bird of prey. He takes gazing in dreamy trances to new levels and when you read his lilting, poetical prose, you are profoundly moved, even though reading it is extremely hard work because you need to take each sentence at a slow, ambling, pace without for one second, losing attention.

The air, in our garden, especially around the dead meadows, is full of wafting detritus.  Insects by the million float about thinking that summer will last forever.  Thistledown and willowherb seed drifts everywhere and the smells of ripened wheat have given way to that wonderfully hot, almost baked bread smell of newly turned land.  Round here, disc harrows or cultivators rip up the stubbles within hours of harvest, and new crops are soon drilled.

The swifts are gone, totally gone; the black headed gulls have barely any of the chocolate breeding colours left on their crowns and the late hatch of holly blue butterflies are searching for enticing evergreens.

We have an embarrassment of hoverflies and a wasps' nest in our house wall.  We've decided that if we don't disturb them, they'll not harm us so will take no action.

Autumn flowers are beginning to stir.   We have an eruption of what used to be Leucojum autumnale in and is now Acis autumnalis in one of the gravel screes and very pretty they look.  Each flower is frail and tiny, so you need lots to make an impact.  Mine are now in their 7th year but I still dig up about three clumps, every September, and divide up the bulbs. 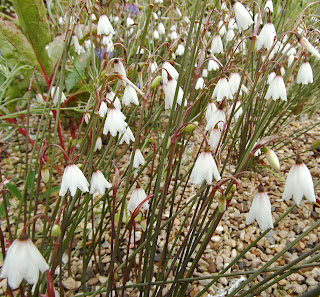 Acis autumnalis, formerly Leucojum autumnale.
Yesterday, the PG and I went to London to make arrangements for some future travel and to 'do' the Miró exhibition at Tate Modern.

The best bit of my day was nothing to do with Miró and was entirely unintentional as perhaps the best and most sincere art is.  We were in the excellent Tate Modern café which, you may wish to know, stocks bottle-matured real ales.  Huzzah huzzah!

At a large table close to ours, about half a dozen of the yummiest mummies I've ever seen were lunching together with their babies and toddlers.  These were pretty obviously chattering class mums and it was fascinating to see how animated, alert and engaged all the little ones were. Watching their antics, while I ate a respectable tuna sandwich and the PG downed a very green green pea soup, was better than being entertained by a jazz combo. I felt quite sad to leave them all.

After that, the Miró seemed almost anticlimactic.  I wrote this about my experience in yesterday's diary.


Joan Miró had a long, productive life, living part of it in exile, enduring the hateful Fascist regime under Franco which lasted from the late 1930s to his death in 1975.  His work is riddled with pain, fear, agitation and hunger for better things.  But the most accessible stuff was painted between about 1918 and 1925. His paintings on copper are staggeringly colourful, for their era, and look almost like modern acrylics.  But the surreal weirdities, with dangling parts - both male and female bits dangle on stalks -  barely recognisable features, inexplicable blobs, squiggles and shapes - some of which he labels ‘personages’ - are impossible for a Philistine like me to understand.
Miró has no feel for anatomy at all, right from his earliest work.  His ‘suckling mare’ for instance, is a peculiar beast whose legs are anything but horsey and whose tail is not attached to its spine, but stuck up its arse.  And his ‘calligraphy of the trees’ as he calls it, suggests that real palms and woody plants are merely a stepping off point for beautifully designed arboreal-ish shapes which bear little resemblance to the real thing.  But, gosh, they are beautiful.
In one early painting, there’s a palm with hopelessly wrong morphology which makes it look as though  one trunk has been stuck on top of another.  And yet, the painting has far greater beauty than would have been seen in a more faithful depiction of the actual scene - his nondescript farm garden in Catalonia.
The works of his old age, dare I say, seem to me to be largely crap.  He had clearly become part of THE  ART ESTABLISHMENT and was then able to churn out inexplicable squiggles and splodges and have a damn good secret laugh.  ‘Hope for a condemned Man’ for instance, is three big white blobs with a single, smaller blob of a different colour in each.  The ‘Fireworks’ triptych was achieved by hurling tins of black paint at a white canvas - but only in the most ‘artistic’ way.
When an artist calls his painting 'Woman with a Blond Armpit Combing her Hair by the Light of the Stars' you cannot help but feel he's pulling your wire - isn't he?  I came away scoffing, but have to admit, I've been thinking hard about Miró ever since I got home. 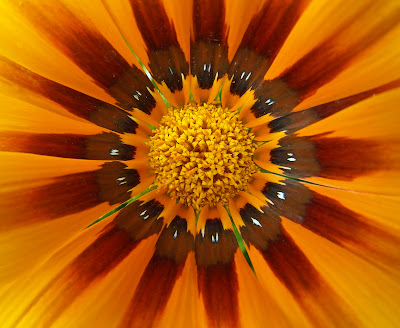 A sunbursting gazania - they only do this in sun and sulk at other times.
I'm listening to England making a convincing start, in the 4th Test Match agains India.  A 4 - 0 win would be sweet indeed, but our team needs to beware of hubris, and of the weather forecast.

Around this day, in 1952, when I was eight, I was tooling around the bush in Kenya where, for a time, we lived.  My family were staying on a farm close to Nyeri (whence cometh some of Africa's lightest, subtlest flavoured and most fragrant coffees) and I was out 'hunting' with my mate who was my age.  We were on a quest to find the biggest preying mantis possible and also hoping to catch some chamaeleons.  These make the most wonderful pets, when you're eight, and provided you keep them well fed with grass hoppers, will cosy up to you and amaze you with their independently swivelling, goggly eyes.

Despite fixing our elasticated, snake-buckled belts round our heads and sticking feathers in them, with grubby handkerchieves fixed over our necks, to ward off sunstroke, I don't think we quite cut the mustard, as true hunter gatherers.  If you stood us up against, say, a Kalahari bushman, I think we'd probably have been found just a teeny bit wanting.

But we got our chameleons!


This weeks film was  Everlasting Moments a nicely shot, faultlessly directed piece by Jan Troell about a woman who finds solace in photography despite living a harsh, working class life. She pops out children with scary fecundity, is alternately brutalised and, sort of, loved by her Finnish husband - played by Mikael Persbrandt who looks and acts like Sweden's answer to Oliver Reed.  She also has an innocent liaison with professional photographer played by Danish Jesper Christensen - clearly the Scandinavia's answer to Donald Sutherland.  I loved this film for its gorgeous sepia photography and faithful, non-romanticised portrait of life for the underclasses in the early 20th Century.  And I can even forgive it for a slightly unconvincing conclusion.

I'd planned a short post, but this one has been endless.  If you've read this far, I admire your doggedness and thank you profoundly for your kind perseverance.

As that weatherman used to say: bye bye for now!
Posted by Plant Mad Nige at Friday, August 19, 2011