'WE'VE COME ON HOLIDAY BY MISTAKE'

Good morrow, my hearties!  I discovered myself on holiday, this week, so only a token post. 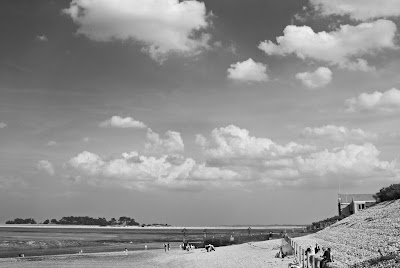 Holiday makers enjoy sunning themselves near the creek's mouth at Wells-next-the-Sea, Norfolk.  The pines on the horizon are growing on what are optimistically known as the 'East Hills.'
(CLICK ON PICS TO MAKE BIGGER.)
What a frabjiously histrionic bit of weather we've been having!  Two days of Kuwaiti style humidity and oppressive heat followed by a Singapore Sling of thunder, typhoon-strength rain and served up with an ear-smacking, hair teasing, nipple-firming whack of hard-whipped wind.
I've never experienced such a strange swirl of cold and hot air, all in the same breath.  This was not natural.  A stiff breeze wound itself round my bare legs – at first hot and breathy, then deathly chilled and finally violent enough to knock the borrowed sun hat off my head and into a puddle.  The sensation of that turbid wind was similar to swimming in Norway's Sognefjord - which I did one summer - where the surface water was warmer than a tropical pool, but a metre down, felt like ice.
Norfolk, where my daughter and family are holidaying, is lovely, especially in February.  But the region where we stay is becoming rather badly Sloaned.  Wells-next-the-Sea now boasts TWO delicatessens and one of the pubs has gone off its head with pretentiousness.  Traffic is becoming impossible and when we arrived on Tuesday, the town was cluttered with SUVs and similarly unsuitable vehicles, milling round, desperately looking for somewhere to park so they could unload their Jeremies and Jocastas.  No one was eating candy floss - a sure sign that the place is going depressingly upmarket - and I had to go miles away from where we stay and park near the disused jam factory.
We excursioned, on Wednesday, to Pensthorpe – a wildfowl menagerie made popular when it became a base for some of BBC 2's Springwatch programmes.   The duck, as expected, were all in eclipse plumage, but what a super place it is!  The Piet Oudolf gardens are all beautifully, well, Oudolfish and the 'Wave Garden' undulates its hedges, despite the dense shade.  All the key parts of the attraction for our grandchildren, ie, the lavatories and cafés, are exemplary.  Tasty food, special lunch packs for children – reasonably priced – and some of the best and most generously filled sandwiches I've ever eaten.
The birds are in superb order, despite being in eclipse, and the information boards were mostly well presented and informative.
But it was the wilder areas, within the vast grounds, that really won our hearts.  A young but surprisingly deep and gin-clear River Wensum meanders through extensive wetlands which were full of baby toads and frogs, alive with dragonflies, noisy with bird noises and abuzz everywhere with insects.  Showing my 4 year old granddaughter a devils coach horse was the fitting climax to an eventful nature ramble.
'Does it bite?' she asks.
'Of course it does,' I reply, 'look at the size of those jaws!'
'Does it hurt?'
'Only a bit,' I lie. 'Let's put him back in the grass now.' 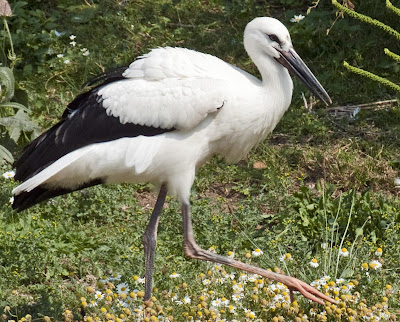 A young European White Stork, Ciconia ciconia dancing for joy at Pensthorpe, Norfolk.
I'm listening to Ravel's Gaspard de la Nuit.
This week in 2006 we had a gale which split the trunk of my Cercis canadensis right down its centre.  I also wrote a piece for a bird magazine about the effect that year's drought was having on the berry crops which would be needed by birds and other wildlife during the coming autumn.
This week's film was West is West.  The sequel to East is East about an emigré Pakistani, married to an English woman and living in Salford.  This time, the ultra conservative Jahangir Khan (Om Puri) takes his younger son to Pakistan to 'sort him out' ie, to re-mould him as a model Pakistani. It's all a bit 'pat and feel-goody' at the end, but still immensely enjoyable.
Posted by Plant Mad Nige at Friday, August 05, 2011