A NIGHT AT THE LEPIDOPTERA

Sorry but, yes –  yet another butterfly picture.  But but he who tires of such darling winged jewels must surely be flyered of tife.  Get yourself outdoors, now, while there are still a few on the wing and admire their co-ordinated colour schemes and the gliding flight that some of them manage. And what about those intricate, watch-spring probosces which coil and uncoil and can be inserted into the tiny Buddleia flowers with such alarming accuracy? 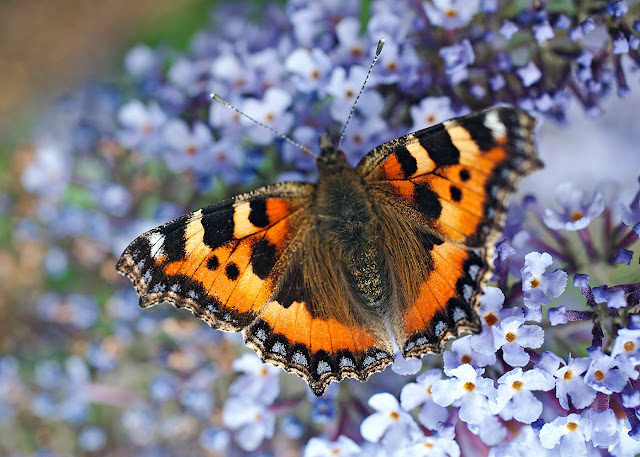 Winter will be here soon enough and then we'll dream of butterflies.  Some of us will long to see buddelias bloom again, and to enjoy their slightly cheap, Fry's Chocolate Creme fragrance.

(Sorry, but I really hate calling the Rev. Adam Buddle's plants 'buddlejas.'  I've even heard people pronounce them 'bud-lee-jiahs' which really won't do.  It's worse than calling 'scones' 'scones' or  'vahses' 'vorses' – or vice-versa.  The correct genus name, arrived at by some pedant or other, may be Buddleja but everyone calls them buddleias, don't they?  Besides, Latin lacks the letter 'J' doesn't it?  Hence the schoolboy rhyme:

Caesar ad sum iam forte,
Pompey ad erat.
Caesar sic in omnibus,
Pompey sic in at.
. . . though it only works if you use the anglicised name for Gnaeus Pompeius Magnus)

A-a-anyway . . .back to butterflies.  Like so many people on the look-out for nature, this summer, the PG and I have been bowled over time and again by so many joyous butterfly sightings that it seems wrong not to mention them again.  Stars for us, this year, were more White Admirals than I've seen in a lifetime; a Green Hairstreak, Clouded Yellows, Graylings and in our own mini-meadow –  after missing them for a year – Common Blues of both sexes.  We hope they've bred but have no idea whether there was any of the necessary hanky-panky.

Also 'on the pin' in his collection, my brother showed me a number of aberrant Camberwell Beauties.  These would have been caught, killed, set and then mounted in an insect cabinet.  But that was in an earlier era when collecting Lepidoptera was a noble pursuit.  How I would love to see that gorgeously cream-edged, purple beauty, Aglais antiopa, on the wing.  One day, perhaps. 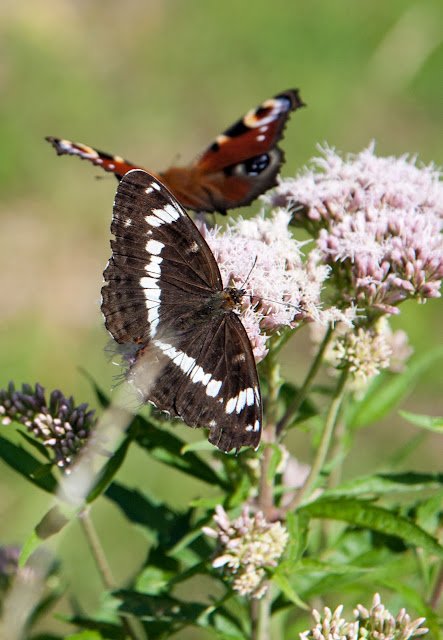 A not-too-brilliant shot of one of the white admirals, Limenitis camilla,
feeding on hemp agrimony in Holkham Pinewoods, Norfolk, in early August.

Butterflies punch above their weight, in the line of beauty.  Few other insects cause the heart to sing  so joyously – especially when one spots an unusual one.  Some are herald insects, too.  The year's first Orange Tip tells us that spring is truly come; Ringlets appear in the first week in July, usually when it's close and thundery; peacocks hang about my potting shed when autumn days lose their charm but fly out again, if the late sun coaxes.

Most of us admire only the adult butterfly or imago but the pupa of a Peacock which hangs from its tail, is an object of intricate loveliness.  And a Large White chrysalis, which props itself upright with a thin silk girdle attached to at vertical surface is also to be admired even though the caterpillar has probably ransacked your broccoli.

A world without butterflies would be a hellish place.  We should strive to preserve such vulnerable insects. 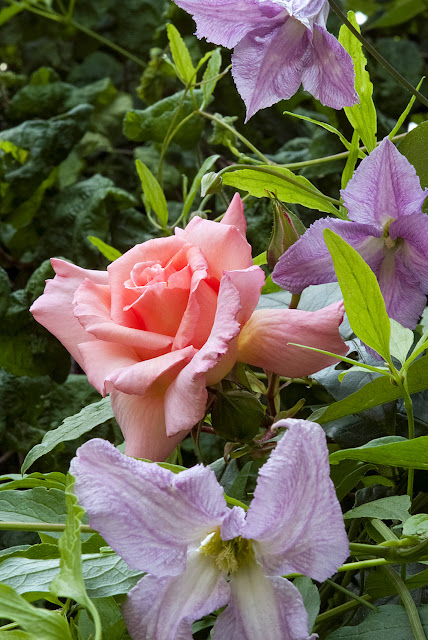 The rose 'Compassion' and Clematis viticella 'Betty Corning,' both of which are fragrant and both of which produce flowers for much of the summer.  These adorn the arch which leads into our tiny woodland garden.


I'm listening to Neil Mackie singing Benjamin Britten's Serenade for Tenor, Horn and Strings.  There are worse ways to enjoy Tennyson et al and the music is sublime – Barry Tuckwell is the fruity tooter.

This Day in 2006  the PG and I were in South Africa and flew to from Port Elizabeth to Nelspruit for a few days in the Kruger.  We stayed on the banks of the Crocodile River, looking into the National Park. Elephants were at the river edge, two species of bee eater were nesting in the banks, as well as goliath heron.  Hippos serenaded us with their grunts each night and gave us a reveille every morning, often accompanied by the haunting calls of African Fish Eagles.  What a wonderful place it was