A SILVERTREEDAZE EXTRA
From time to time, between more general posts, I'll be publishing selected  extracts from my diary which may be of general interest.  The text has been  edited, to remove personal or private material and to avoid offence where it is not intended.

Accompanying pictures, as always, may be relevant but are more likely to be included just for relief from the awful prose. 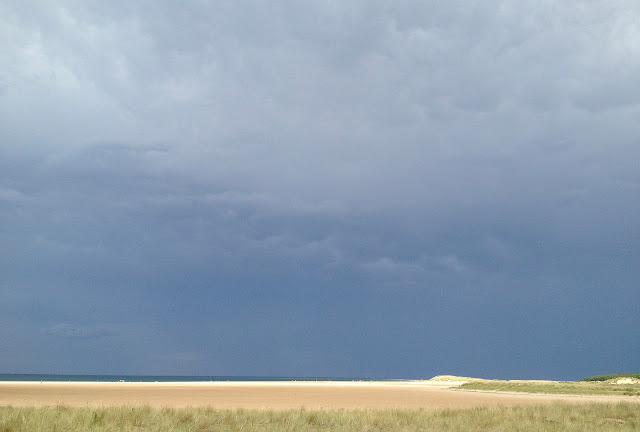 A storm builds over the North Sea at Holkham Bay in early August 2013.
Is a storm gathering over food supply versus sustainability in Britain?

21st August 2013, at home.
After lunch, the PG and I walked the fields above the Fen.  It was what Norfolk countrymen would call a 'fine, soft day' with pearly sky, gently filtered sunlight and exactly the right level of warmth.

Much of the wheat is newly harvested.  Land is cleared within hours of the huge, high-tech combines feeding their way into the crop.  Straw was processed into big bales – not for bedding or fodder, I suspect, but for bio-mass fuel to feed power stations.  The baler follows the combine; fork-lifts and trailers follow the baler and within 24 hours a 50 acre field is cropped, cleared and part-way tilled with heavy disc harrows or a spring-tine drag.

Where land is worked, gigantic half-track or double-wheel tractors pull tine-disc combinations, sometimes turning stubble to drillable tilth in a single pass.  I'm reminded of H G Wells' 'Land Ironclads' – though those were military tanks.  The land is bludgeoned into submission by these mechanical giants whose size makes their drivers look like little plastic toys .

The romance is gone from arable agriculture.  No mammals – short tailed voles, harvest mice, field mice – will pick through stubbles which are left for less than a day.  Few farmland birds will forage for grain fragments.  Arable weeds – if they germinate at all – will be zapped with residual herbicides and a rushed treatment with slug pellets – probably methiocarb – deals with the molluscs.  Thus, the rich fenland, east of the village, becomes more barren than a desert.  Kestrels, buzzards and barn owls, though they survive here, have slim pickings and the only refuge from machines lies in the narrow field margins, occasional trees and the few dyke-sides or road verges which have not been mown.

Considerably more than four tonnes of milling wheat can be harvested from each tilled acre, here – more than double the national average for when I farmed in the 1970s.  In real terms, the price of the grain has not increased by much, so arable farmers need those big yields to stay profitable.  But on such bountiful land, do they need generous taxpayer subsidies?

The payments are for 'land stewardship' we're told – but little or nothing is done to protect the varied habitats surrounding the intensive cropping.  Thus, by default, biodiversity is reduced.  And even where there are extra stewardship schemes, also paid for by taxpayers, biodiversity can be almost as poor.

I don't think this damage is caused by wantonness or spite. As with so many cases of unnecessary damage, ignorance is the main cause.  With learning, better understanding of how the natural world works and small, low-cost – or even cost-free –  changes in many common farming practices, biodiversity could be sustained and enriched – and without yield loss.  With that kind of care, the beauty of these flatlands would be spectacularly enhanced.


There are outstanding exceptions.  Even among the most efficient and industrialised farmers, some are fully in tune with sympathetic land use, with assisting natural diversity and thus, with creating greater concomitant beauty.  (Beauty being far, far more than just what you see, when viewing the landscape.)


But in spite of everything, our Fen does not lose all its beauty.  It remains a place to be cherished for its calming flatness, big skies, constantly changing light, moody water courses, low-level mists, rampaging thunder storms – even for its keening, penetrating winter winds.  That is so even as, day by day, month by month, a little more life-richness is lost. Plink, plink, plink – one by one the lights of life go out, the bulbs fuse, the filament snaps, a fairy dies.

With land ownership – whatever the acreage – comes a deep and binding responsibility, not just for now but for coming generations.  And that applies to those of us who garden, as well as to big arable farmers.

This is not about saving bitterns or re-introducing ospreys; it is not about grants for planting pointless hedges or digging isolated ponds.  This is about teaching everyone in the countryside how to live and let live – that is, to let the rest of life on earth live.

At a guess, I'd say that biodiversity is greater, now, in Peterborough than on the fenland which surrounds that sprawling city.  And yet, 200 years ago, the lowlands of Eastern England had some of the richest and most diverse habitats in the British Isles.
How on earth did we allow that to happen? 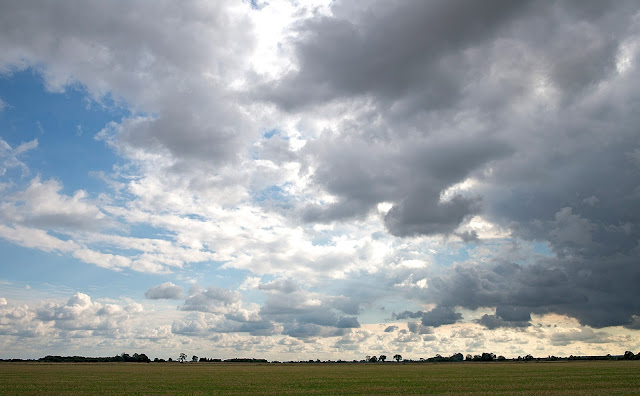 BIG SKIES: part of our fen, at the end of the settled weather period in early September.