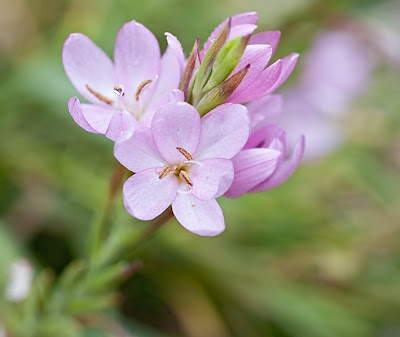 Schizostylis coccinea flowering on New Year's Day
The hangover fades at last.  The house is quiet, now the relatives have all left and as the dried, wizened holly twigs flare up and crackle in the grate of our kitchen fire, post-Christmas joy begins to run its naughty fingers up and down my spine.
There's such a sense of excitement, once one has de-toxed, about the New year.  A new start in the garden, the sun a tad higher each noon, winter things budding and breaking, all like coiled springs waiting for the frost to ease so that they can be released.  And of course, the newness and tidiness in my office.  (Well I haven't actually got round to the office cleaning, but  I will, I will, I will. . .possibly I will!)
Each year, between Christmas and New Year's Day, I like to take a census of what's flowering in the garden.  And now that this blog exists, I promised to pass such relatively useless information on.  I'll try to do that without presenting a tedious catalogue - oh - and I should say that a lot has happened since the count was made.  Severe frost over the past week has put paid to a blooms that were teetering on the edge and daily sustained cold is holding the January regulars back.  How dramatic it all is!  What will happen next?
The most remarkable flowers are what I'd term the 'unofficial blooms.'  A shocking pink thrift has three jolly blooms, as does the extraordinary blue-flowered Corydalis elata. My original plant came from Coton Manor, in Northamptonshire last spring and has seldom been out of flower since. The wallflower superhero Erysimum `Apricot Twist' has also been in constant flower, now, for 18 months - no garden should be without it, unless you dislike orange.  I mentioned Pelargonium sidoides last time - still surviving, despite further, deeper frosts - but there's also Senecio pulcher, a New World beauty with rose-purple daisies. 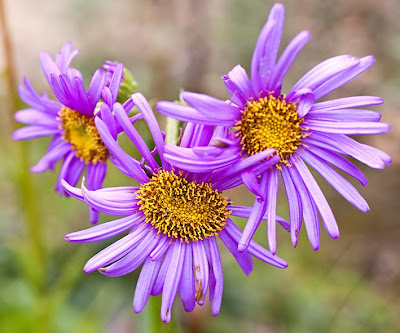 Senecio pulcher, scarred but still blooming.
Two roses 'Perle d'Or' and 'Bengal Crimson' hung on until yesterday and a frail little flower stem of Erigeron 'Quakeress' was almost, but not quite pickable until the week end.
Hangers on from autumn include Schizostylis coccinea - a wild collected form given me by a retired Submariner who originally received it from an elderly relative, possibly an Admiral, who dug it up in the Cape when it was legal to do such things.  The arbutus still blooms, just, as does Chrysanthemum  'Emperor of China' and I can't tell whether the four different species of primula are super-early, or super-late. 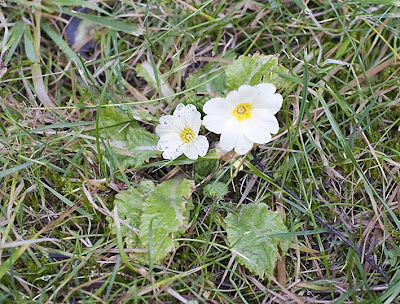 Outstanding pluck!  A British wild primrose blooms in the short grass of my meadow. 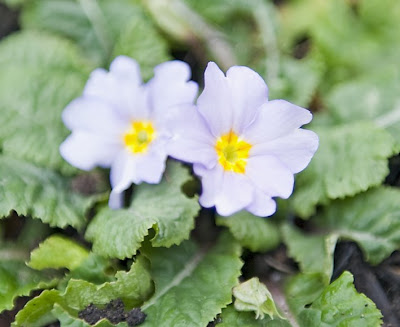 The Asian Primula vulgaris sbsp sibthorpii  flowers sporadically through winter.
Official winter bloomers – whoops, pardon missis! –  are a little later to flower than usual, apart from winter jasmine which has never looked better.   Clematis cirrhosa 'Freckles' (bottom picture) is a joy over our front door, Daphne bholua 'Darjeeling' flowers outside the back door and prostrate rosemary is blooming on the terrace steps.  (That sounds a bit posh, but the steps are cheap, nasty corporation flags, inexpertly laid by me in a hurry and all a-hoo, as they say.)
What else?  Viburnum farreri - so much prettier with its little white blobs, than the coarser pink V. x bodnantense.  Lonicera x purpusii has one bloom but plenty of bud; Stachyurus praecox has flowered before the leaves have fallen, the winter cherry is late opening but has a smattering of blossoms and the bright red Chaenomeles 'Rowallane' is almost at its best.
The total is only 35 plants, but I suppose that's not too bad for a small garden.  I'll bung the full list at the bottom. 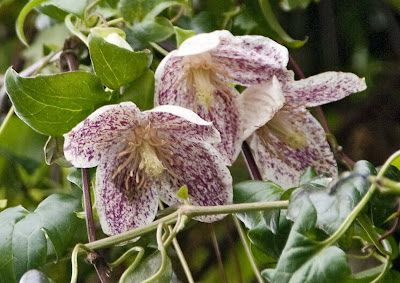 Clematis cirrhosa 'Freckles.'
This day last year we were enjoying an Epiphany lunch with our oldest friends who, a year earlier, had bought an old, thatched dwelling in Northamptonshire, and who had then restored it with such minute attention to detail, and with such inspired craftsmanship, that the building looks good for at least another century.   Before sitting down to eat, a gang of us stood round the grand piano which our hostess played with skill and gusto, singing a selection of carols and chunks of Handel's Messiah.  We had scores and sang in harmony, sort of.  Luckily, there was no one around to hear us and our hosts had been canny enough to invite the neighbours so that they couldn't complain.
I'm listening to bits of Mendelssohn's  Elijah sung by the Academy of Saint Martins in the Fields.  The back hairs are bristling at the sound of Thomas Allen's supreme baritone voice.  It's like dark, ivy-blossom honey.
That New Years Honours  list again in full
Arbutus unedo
Armeria maritima
Chaenomeles 'Rowallane'
Chimonanthus praecox
Chrysanthemum 'Emperor of China'
Clematis cirrhosa 'Freckles'
Coronilla valentina sbsp. glauca var. citrina
Corydalis elata
Daphne bholua 'Darjeeling'
Erigeron 'Quakeress'
Erysimum 'Apricot Twist'
Forsythia 'Lynwood'
Galanthus nivalis (bud only)
Helleborus foetidus
H. orientalis
Iris unguicularis
Jasminum nudiflorum
Lonicera x purpusii
Pelargonium sidoides
Primula - hybrid polyanthus
Primula elatior
Primula vulgaris
Primula vulgaris sbsp. sibthorpii
Prunus subhirtella autumnalis
Rosa 'Bengal Crimson'
Rosa 'Perle d'Or'
Rosmarinus prostrate form
Schizostylis coccinea
Senecio pulcher
Stachyurus praecox
Viburnum farreri
Viburnum tinus
Viola Avellan
Toodle-oo!
Posted by Plant Mad Nige at Tuesday, January 06, 2009

Email ThisBlogThis!Share to TwitterShare to FacebookShare to Pinterest
Labels: http://3.bp.blogspot.com/_d3hYM1l8N7I/SWNmTrTL98I/AAAAAAAAAMo/DkpTkBAhDkY/s1600-h/PrimsibW.jpg