Well hullo!
I'd like to apologise, most humbly,  to the following:

To Arabella Sock - because I was rude about her Heuchera which she grew in a miniature gabion.

To Plantagogo and Heucheraholics because they grow and market a huge range of the genus Heuchera   Their plant quality, as seen at the best of Britain's flower shows, is tip top and their service is, I'm sure excellent.

And to heucheraphiles everywhere - apologies to you too. 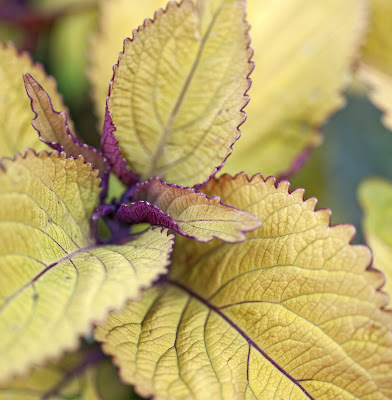 Solenostemon, unnamed seedling.  A bit too close for comfort, to a heuchera hue.  But I still love it.

CLICK ON PICS TO SEE BIGGER.
Now please don't misunderstand me, I still hate heucheras.  Although I'd defend to the death, the right of anyone to grow the things, if so minded.  They make excellent vine weevil food, anyway, and I'm informed by my friends at Buglife that insects need all the help they can get just now.
My main gripe, with modern heucheras are the leaf colours – the caramel ones, the pallid yellow ones, the ones with foliage that looks like pewter,  and the ones whose leaves are the hue of Christmas puddings and those ones with flat-hued, beetrooty lugubriosities for leaves.  And it also bothers me that the flowers look, somehow, as though they belong to a completely different type of plant.

BUT . . .But, but – I've good reason, now, to repent of my bellicose remarks concerning heucheras and it all happened like this.

Aeons ago, when my father was still youthful, he used succumb to the most passionate crazes about particular plant groups.  One year,  he propagated enough Asiatic primulas to re-stock all the wetlands in Kashmir.

In another, he discovered the wholesale seedsmen and bought seed for enough bedding to furnish Harrogate, Bath and Aberdeen - all past finalists in Britain in Bloom, since you ask.

These crazes for bulk growing began when I was about 13.  He couldn't make his mind up, one year,  which variety of coleus to grow.  In the end, he bought a packet seed of every variety from every seedsman he could find.  And for a string of summers, every windowsill in the the house, every inch of bedding space outside and an entire greenhouse was devoted to amazing displays of what where then Coleus and are now Solenostemon.


My mother loathed them and said they were 'common' and I have to admit, their colours are a bit naff.   But of course, that spurred him on to growing more.  Luckily, he managed to kill most of them off, each winter, with botrytis. 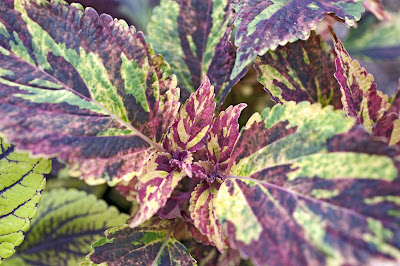 Not so sure about this Solenostemon.  It really is naff, isn't it?
But that spurred him to propagate more feverishly than ever each spring.  When we went on holiday to France, one year, he noted with scorn, that the French allow their flame nettles to flower, whereas he meticulously disbudded his.  And while, looking scornfully at the aforementioned flowering solenostemons, he would, with swift sleight of hand, swipe a bevy of cuttings.  In one hotel where he knew the owner, a Monsieur who resembled Wilfred Hyde White, he even absent-mindedly de-flowered - if that's the right term - a couple of plants, much to the displeasure of the proprietor's daughter.

Solenostemons went right out of fashion for a while.  I never realised how much I missed them, until I spotted a couple of nice varieties for sale at our local general nursery.

I added them to my basket, and a day or two later, spotted another batch going really cheap at Bourne Market.  I've rooted cuttings from every one of them, of course, so now I have a pleasing, burgeoning collection of Coleus, Solenostemon or, if you prefer, flame nettles. 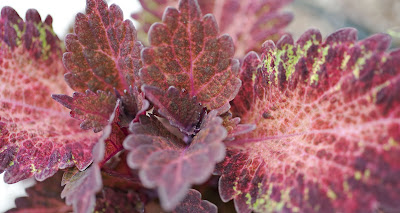 Solenostemon, an unnamed seedling.  Fiery reds, fascinating leaf textures and so easy to grow.
Now here's the apology bit.  I was admiring my latest acquisition - a Solenostemon variety called 'China Rose.'  It was collected by Ray Waite, ex Curator of Glass at Wisley, and generously handed to me, in the form of three cuttings, by his successor, Nick Morgan.

I rooted all three in precisely 7 days and now have healthy young plants - though still too tatty to show you pictures.  When they're photographable, you'll be well impressed!

Anyway, as I admired my growing collection a spine-chilling realisation dawned on me.  'Some of these,' I told myself, 'are exactly the same colour as those nasty heucheras you hate.'

Oh my goodness, what a ludicrous thing!

Taste, you see, is utterly subjective and completely illogical. It enables me to adore plants that my mother calls 'common' and permits certain exalted persons to sneer at jazzy polyanthus or Schizanthus at flower shows while raving over azaleas in identical colours on their ducal estates.

I don't like heucheras but I love Solenostemon.  Where's the sense in that? 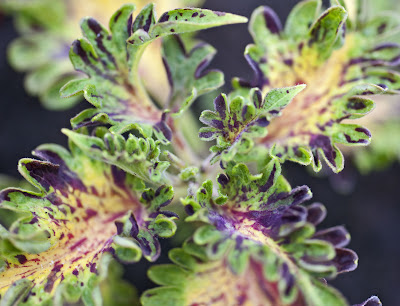 One of the cheapie flame nettles, from Bourne Market - I love the deep lobes and distorted leaves.

I'm listening to Benjamin Britten's Rejoice in the Lamb - words by Christopher Smart who was mad as a hatter.

This day in 1983 I had just returned from a West Country visit.  Three people came to our garden, that evening, according to my diary, and went away cross because we didn't sell house plants. They were not interested in any of our hardy nursery stock.

This week's viewing - well, and for some time past - has been the 1984 ITV adaptation of Paul Scott's wonderful Raj Quartet, Jewel in the Crown, in which a dastardly Tim Pigott-Smith, boozy Judy Parfitt, cowed Peggy Ashcroft, delectably sensible Geraldine James and dishy Charles Dance take us through the death throes of the British Raj and birth pangs of the new India.

Bye bye, and enjoy your heucheras.