A really handy rule to follow, when weeding is: never pull anything up unless you know exactly what it is.  So when I spotted, last spring, a dark little seedling in a place where a mixture of dahlias had grown the year before, I knew it was worth keeping.This infant had but two seed leaves and was less than a centimetre high -  far too vulnerable to slug attack to be left on its own.  So I potted it, nurtured it and coaxed it on until May when the sturdy little plant was ready to go back into the border.   The leaves were chocolate-coloured and I couldn't wait to see what the flower would be like.
But this little bastard - parentage unknown - wasn't going to be hurried.  June crawled by, one wet day after another.  July was worse, with gales as well as rain.  By August, when I'd staked everything up to its neck, and when the stakes themselves were being blown over, still not a peep out of Baby.  Nothing, nada, rien!  Not a bloody petal!
But September brought the result I was gasping for.   A nice plant had developed with good height - about a metre -  excellently balanced shape with dark, lustrous foliage.  And there, among the brooding leaves - the first bud.  Hurrah!
The excitement of waiting for a new seedling to flower is excruciatingly delicious.  Unlike a commercial breeder, who plants out thousands and selects one or two if he's lucky, I had all my eggs in this one basket. And it was an accident at that. 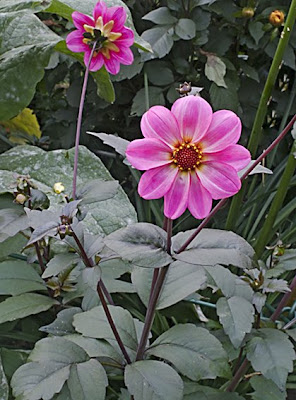 The first flower opened two weeks ago.  And now it has produced second and third flowers.  A lovely, dusky-but-bright, rosy, mauvy, purply pink.  Possiby too girly for some and too tarty for others.  But it's a single, which is a mega plus for a doubles disliker - and terrific for bees and butterflies - and I absolutely love it!
Has this dahlia commercial value?  Probably not.  Is it pretty - well I think so. 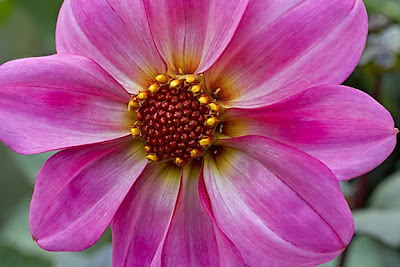 So, in the unlikely event that you've read this far, thanks for your attention, and for sharing the ineffable joy and delight of seeing my baby blossom.  I'm going to call it 'Pewter Rose.'  Yes.  I quite like that Dahlia 'Pewter Rose.'   As pretty from the back as the front! 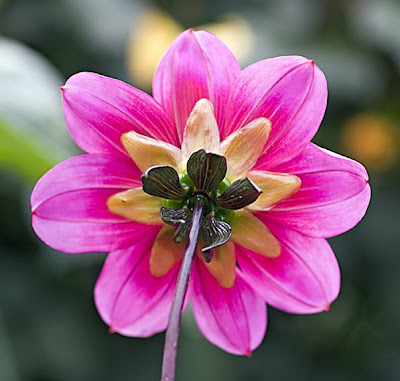 A TAR OF ROSES

I suffered a disturbing dream, last night.  I was locked in a prison cell of some kind and made to watch a huge television screen with blaring sound.  I woke, hearing the voice of Toby Buckland saying "this geranium variety is called  'A tar of roses'" and recalled last night's Gardeners World.
Because of a long-running and incurable allergy to gardening programmes, I haven't watched Gardeners' World for several years.   But now that the new anchor has had week or two in which to establish his root system, I thought I'd watch last night's show to see how he's getting on.
When you return to a TV show, after a long absence, it can be rather a shock.  In fact I've only just stopped shaking and hope that the dizziness will pass, before too much longer.
Toby Buckland seems to be pretty good.  He knows his stuff and provided a stream of helpful tips and useful information - little things, like how to make sure there's a good edge on your knife by resting it on your thumbnail - and is relaxed and comfortable with his pieces to camera.  I'm planning to erect a greenhouse myself, during winter, so his comments were particularly valuable, as far as they went.
But the on balance, the programme was exasperating.  There seem to be a million presenters, a string of locations but a distinct undersupply of useful information.   There was a wonderful lady called Alys whose compost soup looked disgusting but whose quite amazing hairdo did much to distract one from the putrefying sludge she was churning in a sort of plastic cauldron.
Amid the collapse of world banking, economic ruin and many of us facing unemployment or a pension crisis - your time will come, depend on it, dearie - Sarah Raven was sipping such life essentials as strawberry-flavoured martinis.   What was that all about?  And where was the gardening in that item?
We watched Carol Klein hand over Gladiolus papilio for planting at a dangerous time of year- I wouldn't dream of moving mine until spring -  and then, in a fascinating garden that we so badly wanted to see more of, we saw her squashing Erigeron karvinskianus into a mud ball for planting in a wall.  That was good, sound stuff but throughout the rushed item, I wanted more info, more tips, more 'reasons why,' more advice.
The laddish allotment scene with Joe Swift and Toby almost had me diving for the remote. Joe's Islington Cabby brogue seems to be more carefully cultivated than the raspberries on his highly designed but puzzlingly shambolic plot.  Again, I felt starved of any useful information.  If I'd been a beginner, I still wouldn't have known when you prune autumn raspberries and why they are pruned at a different time from summer ones.
Toby's 'how to stick cuttings' sequence was better, but his actions were not matched to his words.  He said we should put the cuttings at the edges of the pots, giving reasons why, but then we saw hands inserting them well away from the edge.  And when he showed us different cuttings, given to him, the next shot was not of the gift cuttings being inserted, but what looked like a re-run of the sequence we'd just seen.
I switched off, at that point, and was left with the impression that the programme makers at the BBC must think their audience is composed of people with a mental age of three, the I/Q of a courgette and Attention Deficit Disorder to boot.
I might revisit the programme in a few years - 2012 perhaps -  but for now, I think I'll stick to films on DVD for my Friday jollies.
Posted by Plant Mad Nige at Saturday, September 27, 2008 1 comment: 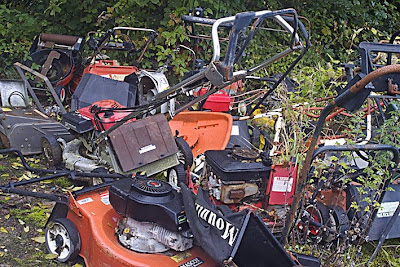 I thought I detected just the gentlest hint of antilawnism, among comments on the Garden Monkey's admirable blog.  And, because I possess a lawn mower and cut my grass from time to time, felt a little bruised - on behalf of good and kindly lawnatics everywhere.
Having seen Mirabel Osler's wonderful garden, I'm not surprised that her life was full of contentment with neither lawn nor mower.  There wasn't room for either with so many other wonderful features.
But there are lawns and lawns and in my rural and cottageous patch, lawn seems to be the most fitting and natural floor.   I neither weed it nor feed it and by now, grass is almost a minority plant family among the daisies, self-heal, clover and other 'weeds.'   Thoroughfares among our dishevelled borders are more pleasant for being grassed and, with such a bitty and disparate design as ours, turf has a wonderfully binding effect, leading one gently from one spot to another.   Thrushes, blackbirds and starlings love short grass, too.  Chris Baines, the conservationist, once told me that the best groomed lawns in his neighbourhood were also the most visited by such birds.
As our plant collection grows, and space becomes increasingly sought after, our grass areas shrink and I'm happy about that, but I'd never want to be without any lawn at all, unless my space were too small to accommodate one.  Even then, I'd try to cultivate a meadow in a pot. (And that's easier than you might think.)
And talking of meadows, almost half our largest grass area is laid down to a mini-meadow which blesses us with a wonderful run of flowers from aconites in January, celandines, Crocus tommasinianus, fritillaries, pheasant eye narcissus, cuckoo flowers, cowslips, some slightly naff multi-coloured primroses, camassias, lots of summer meadow stuff and so on.  At present, there are colchicums and Cyclamen hederifolium, in the grass. 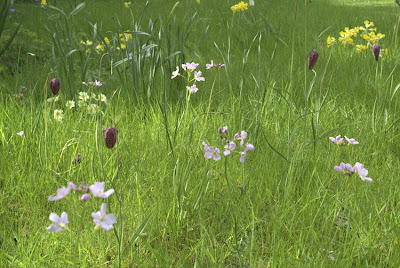 The 'idiots' on Garden Monkey's posting are, presumably, those who strife daily for the faultless outdoor baize of a weed-free, nitrogen-stuffed sward.   They mow, scarify, roll, dress with lawn sand, drench with moss-killer, spray weed killer.  After too much rain, they dance about puncturing the surface to help drainage, rake out 'thatch,' treat with fungicides and weep tears of rage and frustration if a toadstool should pop up, or, God forbid, a fairy ring!  Some of them even try to kill earthworms - the ultimate folly!
The drone of mowers is hell for neighbours, admittedly, and spotless lawns are hardly sustainable, but heck!  The lawns are theirs, in their gardens, so perhaps they should be allowed to play in their own way.  Just as, I suppose, Chelsea Tractor owners are allowed to play in their way.
I wouldn't want a spotless lawn - though I confess to a sense of internal joy and peace, when I see those nice stripes on our newly mown grass and I would never set the mower blades low enough to cut off the daisy buds.  So by the time the novelty of the stripes has worn off  - usually overnight - the daisies are back, dotting the undernourished turf. 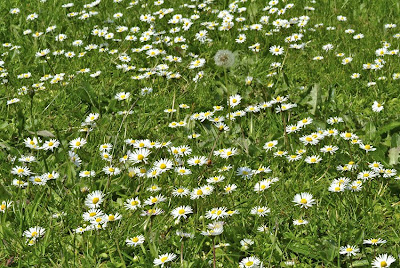 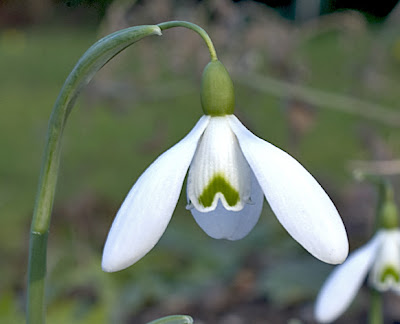 It's frail, small, half eaten by a slug and nearly squashed by one of my evil cats, but we have our first snowdrop in flower.  The picture's a cheat - one I snapped last year - but take my word for it, snowdrop time is with us.
There are several which flower in the autumn, mostly from Greece, I believe and mine is Galanthus nivalis subspecies reginae-olgae - or it is until some kind soul corrects me.
When I planted these, four years ago, I had visions of autumnal snowdrops doing a bit of fusion work with late flowering roses.  Our Rosa chinenis 'Mutabilis' would look great with these little naked snowdrops at its feet, for example. 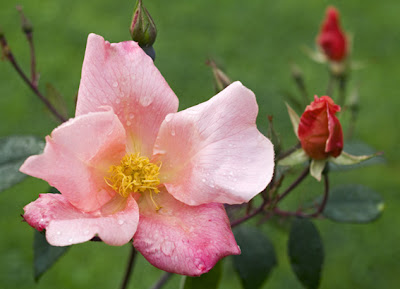 Better, perhaps than the weeds currently bringing colour and botanical interest to that part of the garden.  We've had a plague of field bindweed, this year and although I sweat blood, trying to get rid of the stuff, it's impossible not to like the cheeky little flowers.  Much prettier than the treasured and nurtured Convolvulus sabateus, don't you think? 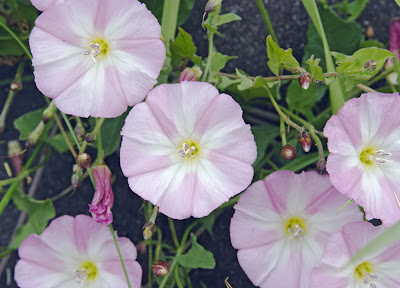 A FLOURISH OF DAHLIAS 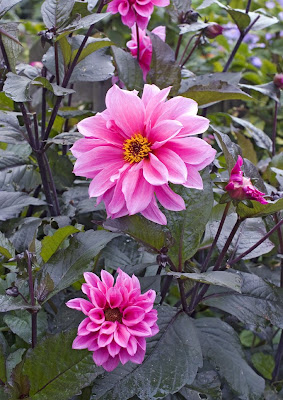 Dahlias are crass, brash, loud - and absolutely wonderful!
My addiction began by stealth, when I dared to grow a few while so many of my gardening chums considered them to be in poor taste.  Someone from Kent once said, with a shudder, 'aren't they a bit Northern?'
This year's star variety is 'Fascination.'   Not everyone's choice, the shocking cerise flowers of this variety make a startling contrast with the gloomy foliage.  Not a colour that sits comfortably in a border with muted colours, but who cares?
The few sunny days promised for much of England should work wonders for dahlias, bringing out more flowers and stimulating growth for a final autumn flourish.
My plants are all about half as tall as normal, after such a wet summer, but that has given them a magnificent framework for carrying lots of flower.
Posted by Plant Mad Nige at Thursday, September 18, 2008 No comments: