KEW UP TO NASH YOUR TEETH

'Especially when the October wind with frosty fingers punishes my hair'
Good afterdoodah!
What a lovely series of gales we've been having.

First, the movie quiz.   Remember - you have to answer it here, in the comments, not merely as a tweet.  And if you want to follow this blog, now you'v found it - please, please do!

This first dialogue is from memory, so I may not have it right, but you'll get the gist.  It's easy peasy:
Actor 1. . . FBI, CIA, ONI - we're all in the same alphabet soup.
Actor 2. . . well you can stick this in your alphabet soup. I had nothing to do with that United Nations murder. 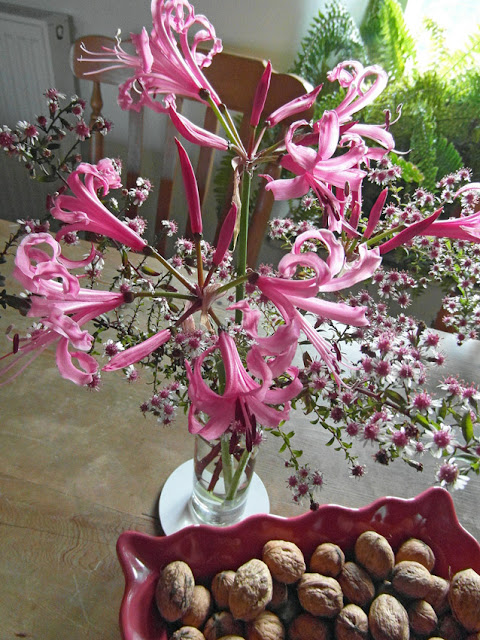 Nerine bowdenii and Aster lateriflorus on our kitchen table.
The walnuts came from an Ely back garden.

I'm going to get cross, in a minute.  But first –  a quiver full of happy recent events and something sumptuously artistic to look forward to.

1. The fieldfares are here.

2. A delightful visit to York, to speak to the Askham Bryan Gardening Club on Autumn Gardening.  The conference centre was pretty full and the Club members turned out to be a wonderfully jolly lot. I hope they all enjoyed their evening as much as I did.

3.  I've fallen so deeply in love with Salvia leucantha that I want to share its bed.


4.  I had a crash with my electric razor which I absent-mindedly drove through part of my nasty little new moustache - see Movember link elsewhere on this blog.  Who says asymmetrical 'taches are unfeasible?

5.  The PG has had a birthday.  I presented her with hand made rose and violent cream chocolates. We have champagne in the fridge but I haven't manage to catch a sturgeon, yet, so no caviar.

6.  I spoke at my old school reunion at Ely. Haven't experienced such cold feet for years and was nauseous with stage fright. It wasn't helped when my introducer said:  'And now our guest speaker, Nigel Colborn, will give us a brief address.'  The outgoing President of the association had already sidled up me and said 'You're not going to speak for too long, are you?  You will be, er, brief, won't you?'

And during the dinner, someone from a nearby table crept over and whispered, 'Can you tell me, roughly, how long you'll be speaking for?'  I said 'you've got a sweepstake, haven't you?'  At which he went rather red and sidled away.

But it went well enough – well, they laughed and clapped a lot – and ended a delightful day, most of it spent with my brother or reminiscing with old friends.

7 Wonderful news that an exhibition by David Nash will come to Kew next year.
Hurrah! Hurrah! Hurrah!
Nash does things with wood; Nash really understands wood; Nash carved a huge wooden ball and let it trundle on an oft interrupted journey along Welsh streams and rivers to the sea. Wooden Boulder.

When I think of the runes burnt into Wotan's spear, cut grom the World Ash, I also think of Nash. He does amazing things with fire and wood.  And what are we all, if not fire and wood in a different form?  More Nash stuff here. 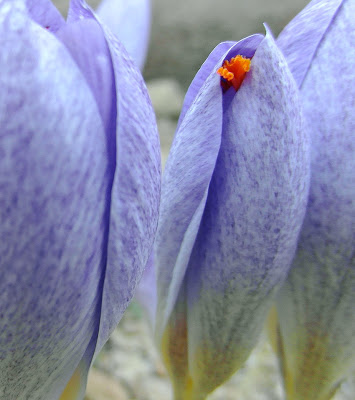 Crocus speciosus. I love the way the stigma peeps out - as if the flower is being indecent.

Having said all that, I'm bothered about Kew.

It is, after all, one of the world's most important and historic botanic gardens.  Until the Maggie era, it was government funded and as such, I've no doubt that there were Civil Service-connected inefficiencies and everyone had a lovely, cushy ride.

But you could get in for a penny and spend the entire day immersed in history, botany, horticulture and applied science. Not bad value, that.

Kew was where I began, as a child, to appreciate the wonders of the Plant Kingdom and to understand the purpose of science.  We lived within easy reach, until I was eight, and my parents frequently took me and my little brother.  One of my earliest memories was seeing black swans with red bills, huge carp rising to gulp air and living loofahs.

On each visit, my father would see that we focused on a specific part of the gardens.  The world's oldest pot plant, collected by Francis Masson in the 1770s, became an old but rather inscrutable friend.  And has remained so.  Kew bumbled along, after our depature to live in Africa but was there, waiting, when I grew older and became even more besotted with plants and nature.  It was busy at weekends but otherwise, was a place which absorbed you; a place of quiet learning; a living museum of plants and botanical history; the world's flora crammed into a few acres by the Thames.

During the Reforming Eighties, the comfy blanket of government finance was pulled off.  Pardon the mixed metaphors but the teat which had sustained poor old Lady Kew for so long was suddenly snatched away, leaving her to starve or take desperate action.

So instead of continuing her dreamy existence, at the tax payer's expense, she found herself having to 'go on the game.'  The only way she could continue was by prostituting herself.  Entrance money jumped from a penny to prohibitive prices – compare the free entry to the British Museum and National Gallery – and the publicity machine was rolled out.  Big events took place.  Massive exhibitions occurred; a ridiculously impractical but prestigious Alpine house was built; herds of school kids were, and are, dragged round the glasshouses; tropical rainforest style tree walks were constructed and in time the Royal Botanic Garden became an expensive and rather exclusive pleasure park. 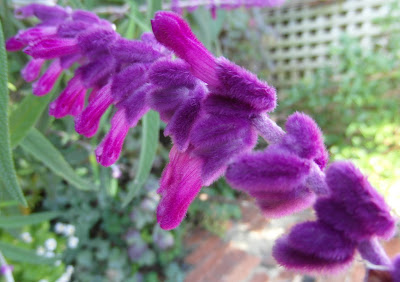 Salvia leucantha  the petals and calyces are so furry one wants to use them as cuddly toys.


Perhaps you have no problem with all that.  And I have to admit, I'm not quite sure why I have found it all so offensive.  Financially, and to improve efficiency, 'going pop' was possibly a good idea. But I've never got over the feeling that the taxpayer didn't get a good deal on this.

Just compare:
each year, £107 is taken from each and every adult citizen in Britain and handed to farmers, regardless of the size of their businesses or the level of their needs.  (Needs?  Needs?  What bloody needs?) The total cost to the nation, of that subsidy, is around £3.5 billion.  Would it starve agriculture if a wafer thin slice were diverted to the RBG Kew?  So that research into medicinal plants, into molecular biology, into taxonomy, into ground-breaking analytical methods could continue without the distraction of Kew's having to flaunt the tarting kit all the time?

Kew's globally important scientific work continues, of course. And long may it do so.  And these comments are absolutely in no way critical of those who work so hard in the place.

I boycotted the much vaunted Chihuly at Kew exhibition, a decade ago, because of these feelings so clumsily expressed above.

But I'm going to the Nash.  At least he is working with a natural substance, much of which actually lives and has its being in the RBG.

And perhaps I should stop moaning and grow up.

This day in 2006 I was writing a difficult conversation piece for The Garden and half dead with bronchitis and conjunctivitis. Disgusting to be with, my diary says.

This week's film was Soy Cuba  (I am Cuba.)  The Kalatazov/Yevtushenko agitprop job on Cuba's transition from oppressed and thug-ridden, offshore knocking shop for Americans to Castro's long-lasting regime.  I loved the edgy, unnerving camera work and felt great sympathy with the stories but hated the soundtrack.  I have such fond memories of Cuba's superb street, bar and club music that the din on screen jarred badly.  The heroic Russian style conclusion was such cheezy totalitarian propaganda that I burst out laughing.

Oh gawd  - another endless rant and ramble.  A rantle?  Whatever!