A BIRD IN THE BOSCH

So much for that brave 2013 resolution to write regular posts, perhaps even weekly.
I'm told that if you don't feed a website or blog on an almost daily basis, no one comes.  But if I've learned anything, in a relatively long life, it's that 'received wisdom' is not always wise. So I'll bash on regardless.  But sorry, if you've missed these insane rants.  Abnormal service will be resumed forthwith – possibly.

I blame government incompetence, for the current freezing conditions and demand a Parliamentary inquiry, now.  I want to see weather forecasters – except the incomparable Liam Dutton – made to squirm in front of stern questions from indignant MP committee members who are desperate to make themselves look angry, superior, sorrowful, scandalised and televisual, all at the same time.  (It was a dark day for democracy, when they decided to broadcast parliament on TV)

I append snowdrops, shot this morning - and about as appropriate in April and Christmas pudding is in July.  Shocking and outrageous. 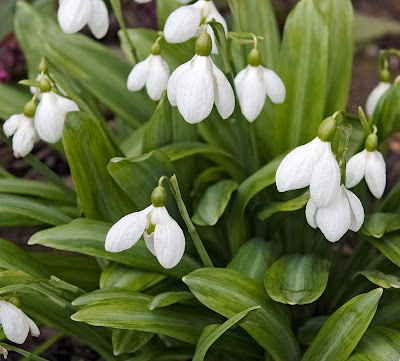 
And now this. . . .
On a more serious note, a remark or two about the Neonicotinoid Issue.  Almost everyone now knows that there is increasing scientific evidence that neonicotinoid-based insecticides adversely affect bee populations by altering their behaviour patterns.  However, no one has demonstrated how this actually happens and although evidence is mounting, full, unequivocal proof is still wanting.  (Please don't get cross until you've read to the end of this section.)

That  bees are  ailing is beyond all doubt.  And it is highly likely that neonicotinoids are one of the causes of this disastrous problem.

But it's important not to make the assumption that if the chemicals are banned, all will be well with the bees.  That is dangerous territory.  There are so many other contributing causes of decline in pollinator populations, including the serious biggy, habitat loss.  And there are still a great many unexplained population crashes in other species - a prime example being the urban house sparrow.

It seems blindingly obvious that in light of increasing evidence, neonicotinoids are far to risky to use, both in agriculture and in private gardens.  It makes no sense at all not to suspend their use forthwith, until the picture become clearer.

To prohibit their use in gardens, while permitting them on farmland suggests either profound ignorance or, and more likely, a pot shot at a weaker target than the disproportionately strong farming lobby.  Bees will be feeding extensively on oilseed rape flowers next month, for example, and will be greatly at risk to neonicotinoid exposure.

While a ban is in place, researchers can continue to search for provable links between the chemicals and the bee problems. And when  there is conclusive proof one way or the other, the chemicals could be reinstated or permanently banned.

Organic growers and some environmentally minded people will, of course, disapprove of their use regardless of possible impact on bees.  But it is important to bear in mind that most of Britain's farmers will continue to use pesticides.  And if they do not use neonicotinoids, they will turn to other products which may be less harmful, but could also be worse. 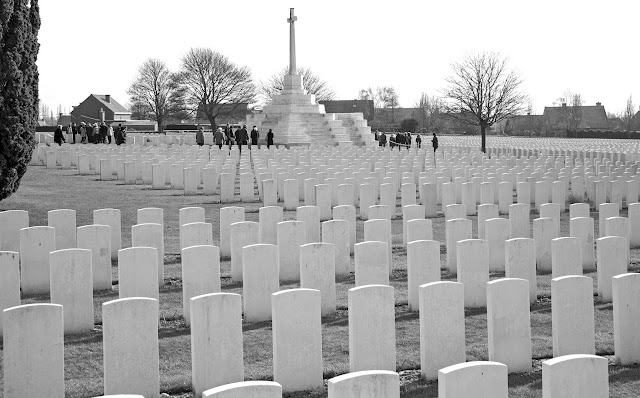 I'm listening to Delius - A Walk in the Paradise Garden, in the hopes of forgetting how absolutely poisonous the weather is outside.

Just over a week ago,  I was with my younger son in Belgium.  We stayed in Brugge and made a brief pilgrimage to Ypres to visit some of the battleground sites and the magnificently restored Cloth Hall, in the centre of the town.  The hall is now home to the In Flanders Fields Museum. We wept, a little, particuarly at the Essex Farm Cemetery, over the grave of a boy killed in action.  He was fifteen years old.  And we wept more, after the deeply moving Last Post ceremony at Menin Gate.  Mawkish?  Probably, a bit, but . . . well, more on this, possibly one day later. 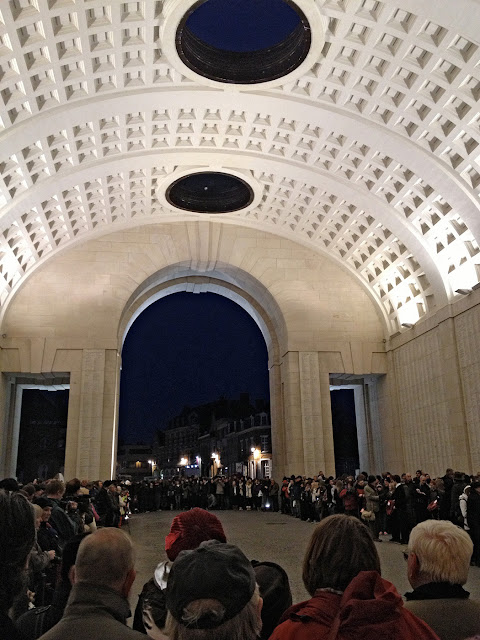 An iPhone picture of people gathering for the Last Post memorial ceremony under Menin Gate, Ypres.  Several hundred people attend daily, as they have for almost a century since 11th November 1918


Instead of the week's film - this:
The collection of early Flemish paintings, in Brugge's Groenigemuseum  is utterly, mind-blowingly wonderful.  If you ever go to Belgium, this is an absolute, utter must must must see.  And I'm talking Bosch, here, but not absolutely not bosh!

Thanks for reading this.  Sorry for such a long absence!
Byee!