Good morrow, good friends!  And welcome to the United States of America, and to Gotham City, known in some circles as New York. 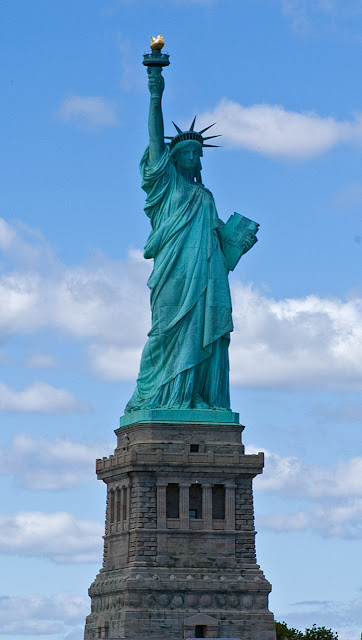 Thought you'd like a familiar piccy to begin with  – shot by the PG on a Circle Line tour of the Hudson River, Staten Island and so on.  She must suffer terribly from aching arms, poor dear!  We admired her while being transported on a Circle Line Tour of the harbour, Hudson River and Staten Island.  It's the best way to see the city skylines but when I was here in the 1960s, the piers all along Manhattan were full of large passenger liners.  The Cunard Queens did a weekly shuttle.  But now, it's largely a tourist area with some wharves left to rot and others occupied USS Intrepid, a WW2 aircraft carrier and on one quay, a Concorde is parked.

I promised to report on whether New Yorkers are as rude today as they were when I lived in this state in the 1960s.  I didn't expect to provide a clear answer but can tell you now, after extensive study of shop workers, dog walkers, shoppers, restaurateurs and general passersby that they are not.  Not rude at all.  In fact I believe, now, that London is up there in the world's leading cities for rudeness and that NY has transformed over the past 44 years.  (44!!)

We've had a wonderful three days, here and take the train to Washington today.  A full day in the Metropolitan Museum of Art, a day touring the city with a group part of yesterday visiting the site of the appalling destruction of the World Trade Centre. 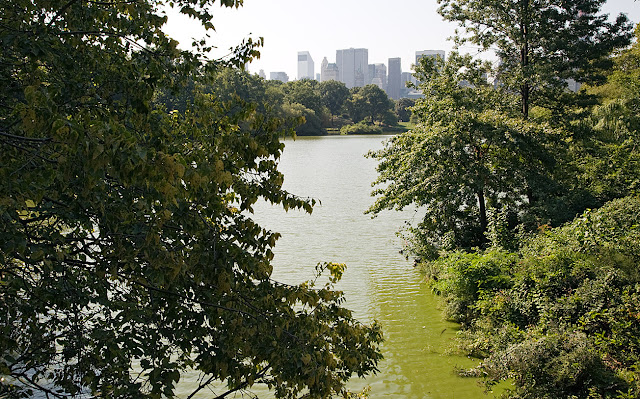 Central Park, 850 acres of greenery, forged out of the schist rock which makes up the island of Manhattan.  It's been hot and dry, here, but the greens are still restful and the park is popular.

We were staying in Upper West Side Manhattan, close to the park on Broadway and 75th. so were able to walk through the greenery to the Met.  The collection is staggering, so here's an edited extract from my diary:

What an experience.  So much to see and so many reactions.  A few special memories stick.  The perfection of Barbara Hepworth’s sculpture, the fakeness and crapness of Andy Warhol’s shallow prints, the complexity of compelling weirdness of Jackson Pollack, the simple beauty of Miriam Schapiro’s  huge Barcelona Fan and the cleverness - let’s not say gimmickry - of Anish Kapoor’s reflecting le
We spent time in the  Roman, modern art downstairs and then American section, before lunch, looking at the classic American style developing after Europe’s love affair with all things Greek or Roman.  And noted the contrast between simple Shaker style interiors and those of wealthy tycoons of the 19th and early 20th Century industrial booms.  And we looked at far too many disturbing creations by Tiffany - not my fave at all, though I like the dogwood stained glass. And as for irises - the famous ones by Van Gogh, glass ones by Tiffany and an uncomfortable close-up of an iris, by Gorgia O’ Keefe which resembles a lady's most intimate sanctuary.
Then, the Moderns.  They’re all there, from pre-impressionists to nutty splodgers.  I loved the two Hockneys, the usual suspects Matisse, Gauguin, Monet, Cezanne and so on are there in spades, and with magnificent examples from each.  I hated the Warhols but was almost moved, surprisingly, by the Jackson Pollocks.  They look like abstracts but there’s so much to see in them.  Weeping figures, eyes, simple squiggles which describe something human. 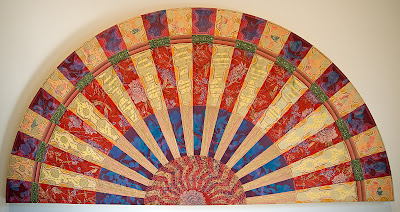 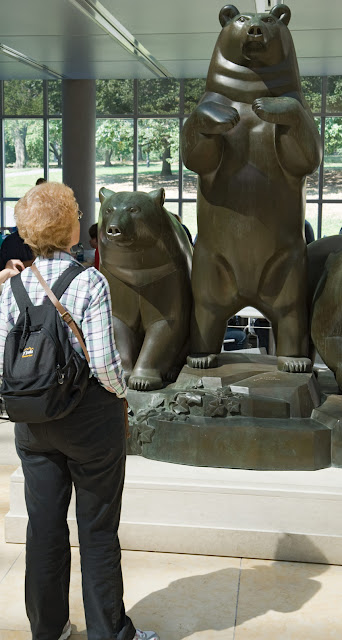 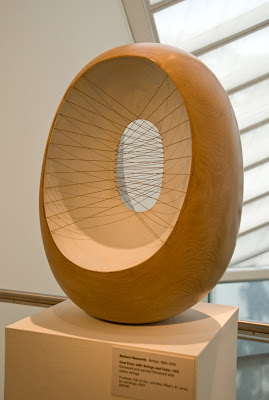 Barbara Hepworth at the Met.  Oval Form with Strings and Colour.

Our last day was spent at the World trade centre.  We took the subway to Brooklyn and walked over Brooklyn Bridge back to the bottom end of Manhattan.  That, in itself, is a delightful experience, apart from the noise of the traffic.  The distant views are cris-crossed with cables supporting the bridge, creating pleasing geometric patterns.  But you cannot wander off the narrow pedestrian track because cyclists crossing the bridge take no prisoners. 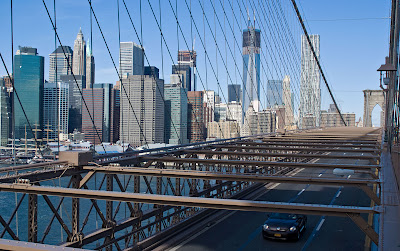 The PGs Shot of Brooklyn Bridge looking across at lower Manhattan


At the 9/11 Memorial Garden, we were frisked and subjected to Airport style security before being allowed into the open space where the massive buildings had stood before the attack.  The area is planted with native White Swamp Oaks, a common endemic in the Easten USA with straight trunks, rough bark, handsome, lobed leaves and plump acorns.

Where the buildings stood are square pits.  Each is now the site of a sort of inverted fountain - massive 30ft waterfalls, run down all four sides into a pool deep below.  Along the rims of the fountain are wide sills, made of bronze and carved with the names of almost 3,000 victims of the Al Quaida attack.

The stark simplicity of this site is deeply moving but also strangely uplifting.  There's a note of steady defiance about the lack of adornment and the absence of any trace of mawkish sentiment.  And there's also a sense, with the young oaks, the cascading water and the open landscape, of rebirth and a new beginning. 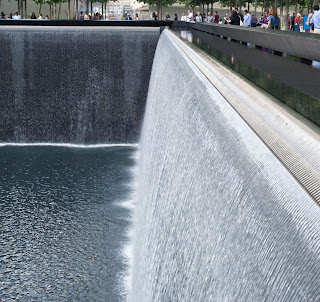 Cascading water falls thirty feet, in the inverted fountains of the 9/11 Memorial Garden.  Here is where the building stood and where so many people, about their business, were so wantonly struck down.

But we won't finish on a sad note.  On a hoarding, near the Memorial Garden, some wag had written the words below.  That, in a way, sums up the spirit among a good many people over here.  You get up, you look out, you greet the world and you get on with it, regardless. 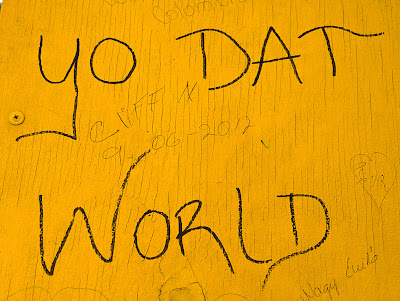 I'm sitting on Penn Station, listening, not to Musak but to a Mozart Piano Concerto. Lovely!

This time last week I was frantically trying to finish outstanding copy before flying over the Atlantic.

No film this week.  So instead, on away blogs.  Notes of my all time faves.  Today Casablanca - the finest commercial film ever made with the greatest story structure, the best possible casting and -- well, let's not go on about it.  It's just a great film and that's that.  'Here's looking at you, Kid'  Oh, and yesterday, we drove past Laren Bacall's apartment!  Not that she was in Casablanca but she was married to Bogey. 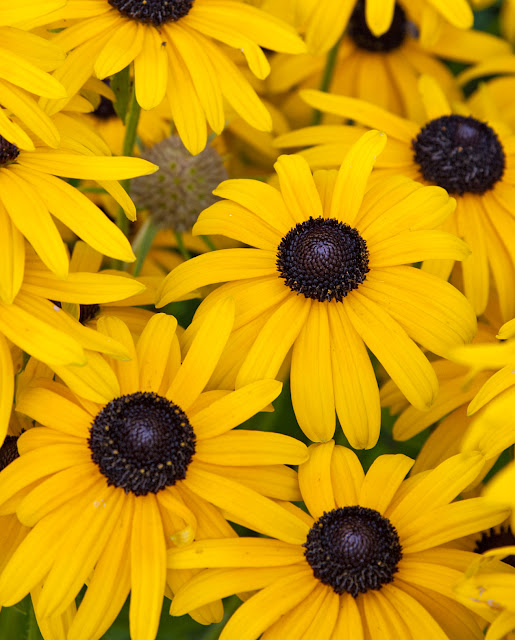 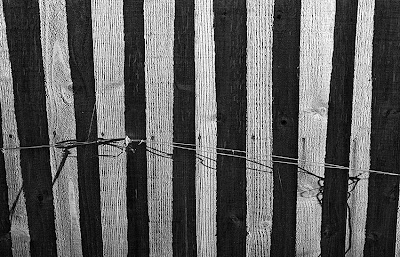