MUTHAH OF A MIDSUMMER - or - GIS MORE RAIN!

Greetings!.
And sorry for such a disgraceful gap in posts. Can't believe it's since mid May,  but I've been having something of mid-blog crisis and am considering a change in emphasis.

29th June 2012
Oh dear! When I posted this yesterday, I didn't realise that folk were suffering hideously with flash floods or were being battered by golf-ball sized hailstones or threatened by tornadoes. And I didn't realise that railway lines were being wrecked, or that folk were getting stranded in vehicles - and worse that there were fatalities.
People who have suffered from such adverse conditions have total sympathy from me. Floods are horrible, even when they're not dangerous and my supercilious remarks (below) about folk who moan are in no way aimed at those unfortunate victims. They have every right to feel aggrieved and let's hope their plight is relieved, and soon.What follows is aimed exclusively at those who complain about the effect of a strange summer on their gardens.

But first, this beautiful creature. . . 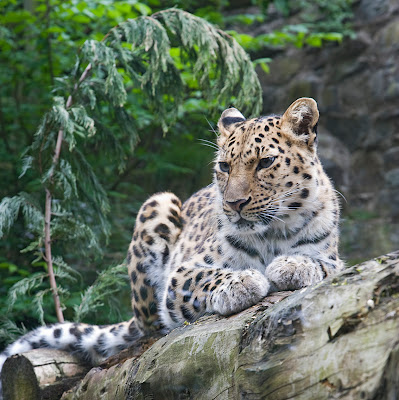 An Amur (or Manchurian) Leopard, Panthera pardus orientalis photographed at Edinburgh Zoo at the end of May.  Such feline beauty is deeply moving, especially when you realise that this species is almost extinct.  It comes from the easternmost limits of what was once the USSR.  In the wild, fewer than 40 recorded individuals remain.

The eyes are a remarkable shade of aquamarine with subtle marks and suffusions that make them resemble precious jade.  And the spots, which are similar to those on a jaguar almost join to form rings on parts of its body.  Look at those massive paws, too.  All soft and 'pussytoes' now, but imagine being clouted, with claws extended.  OUCH!

I felt richer for gazing at this animal but profoundly sad and ashamed that we humans have wrecked its habitat and hounded it almost out of existence.
(Click pics for bigger view)  More information here

THERE HAS BEEN ALTOGETHER TOO MUCH MOANING!
These days, wherever two or three are gathered together, in the name of Gardening, conversation turns almost immediately to how awful the summer is being, how the hosepipe ban ruined people's planting plans, how gales and rain have lashed soft summer growth to pieces, how the succulents have all got waterlogged, how there are frogs in water and the water's in the cellar, how ten billion slugs have simply shredded the hostas, my dere,  ... and on and on and on and on.

I realise that my usual function is to rant, but any railing done here, would be at the moaners, carpers, whingers, whiners, complainers and other mardy-bootses who can't stop banging on about the weather.

Yes, the weather has been crap.
Yes, the hosepipe ban was a ludicrous piece of nonsense, except where it's still enforced.
Yes, climate change is going to ruin us all and this is merely an overture.
Yes, this summer's mainly the Chancellor's fault and the sun would shine again, if only he'd stop all these silly U-turns.

And I don't think it has been a bad summer - just a different one.  Very, very different.  And in certain ways, wonderful for gardening.

For once, here in Britain's usually arid east, it's wonderful to experience what gardening must be like in Devon, or in Cumbria. I've never know such glorious lushness. Look at the pictures of my 'spring' borders, taken a month ago.  An embarrassment of columbines, some of them four feet tall.  And lupins big enough even to satisfy the Monty Python highwayman.  Instead of looking like a well planted border, it all began to resemble a lush, wild habitat.  And I love it.

Bad planting and indifferent design have become all but invisible.  It's just a wild party and any minute, someone's going to rip of her clothes and dance naked on the terrace table! 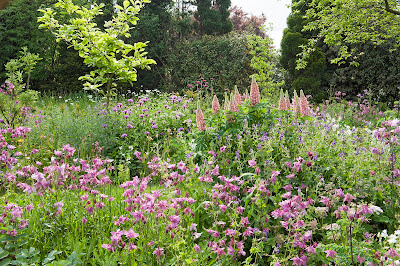 The woody plants are having a ball, too.  Young trees and shrubs, planted into droughty soil, last autumn have grown wonderfully well.  Even mature trees, stressed from nearly two years of below-average rainfall, have stretched their limbs and grown more rapidly than I'd have thought possible.  And the colours!  So many variations of green and such rapid changes in leaf colour and shape.  And so far, so little disease.  (Though we have a plague of honeysuckle aphids.)

We planted a length of yew hedge in 2010.  It has grown more, in the last two months than during the previous  two years!

Oh, and our  mini-meadow is nearly shoulder high, but doesn't look bad, despite the ox-eye daisies having over-reached themselves and partially collapsed; and despite the wildlings – painstakingly introduced last year – being overwhelmed by exuberant meadow grasses.  I'm sure the crushed lady's bedstraw, wild sorrel, field scabious and birds foot trefoil will survive.  And meanwhile, the volume of herbage, with grasses in full bloom, is almost architectural. 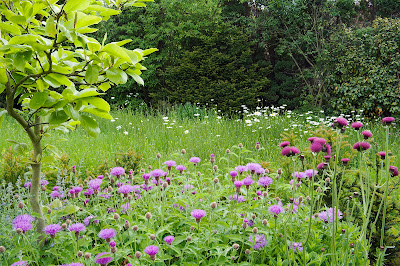 Looking over part of the spring border at the over-lush meadow.

I'm listening to Wagner's Lohengrin - the Solti recording with a very un-German sounding Placido Domingo in the hero's role and Jessye Norman as that horrible old bag Ortrud.

This time last week I was planting up troughs for my mother who had taken my brother and me out for a hefty pub lunch.

This week's film?  Too many to mention, but a piece of acting knocked me absolutely sideways.  It was in Boardwalk Empire, from the incomparable American HBO.  Steve Buscemi, as the vile and corrupt Nucky Thompson is in dialogue with one of his mistresses, played by Kelly Macdonald.  I won't spoil it for you, but this is an agonising scene with terse, near perfect dialogue.  So much depends on the actors wringing the gut-churning irony out of the situation, but while doing very little.  And this they achieved perfectly.  A television moment which stands up to almost anything I've seen in a theatre or on film.

Toodle-oo for now and thanks for reading this far!
Posted by Plant Mad Nige at Thursday, June 28, 2012 4 comments: