WENT TO PARIS WITH MY LOVE: RETURNED WITH AN OLD BOILER

Well, that's not strictly true, actually, but it makes a jolly title. Ten days or so ago, the PG and I went for a romantic though not quite Ruby Wedding trip to Paris. After putting up with me for 38 years, I thought she deserved a treat.
Then, on Friday, I popped over to Calais to do a little essental pre-Xmas retail therapy with my brother. We each picked up an old Poule each at the Coquelles Carrefour. At a mere 5 Euros each, it seemed a good deal, despite the obvious advanced age of both birds. Their thighs, though strangely wrinkled, were pleasingly plump and their breasts could only be described as magnificently matronly. We will each be preparing Poule au Pot for our spouses (spice?) come the weekend.

The Isle de France, with the peerless Notre Dame. Three minutes stroll from our hotel.
We travelled posh, to Paris, by Eurostar. Swish and you're there, stepping out in the Gare du Nord full of hope and expectation after a tolerable breakfast but with disgusting coffee. La Vie Parisienne! Ooh La la!! La belle cité - si charmant, si romantique, si cher!!!!
At the Gare du Nord, where Eurostar decants you, it took half an hour to buy our 'carnet' for zooming about the city by Metro. The queue wasn't that long but only one guichet was manned and the saleswoman was having far too important a chat with her friend, to be able to break off and sell any of us a ticket. I think two of them were moaning to each other about the iniquity of the age of retirement being increased to 45.
Oh, but don't lets rant! Paris is so lovely! After London - which I adore more than any city on earth, and I've visited a great many - Paris is so feminine, so charming and so alluring. The Parisians manage to be brusque without quite crossing the line to downright rudeness and in the streets and cafés, they often make eye contact and will speak, or comment, or even smile. London hasn't been like that for decades. 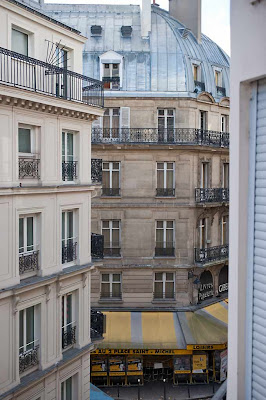 View from our hotel bedroom. The Hotel Mont Blanc is in Rue de la Huchette, just of Place Saint Michel. Wonderfully central but boy, is it basic! The room had no mirror or pictures on the wall, but it was clean. And the lift (elevator) was like something borrowed from a Marx Brothers movie. The breakfast bar was atrocious - a tv and a radio, both blasting away in the tiny space. We walked out and breakfasted far more pleasantly in the boulangerie across the street. 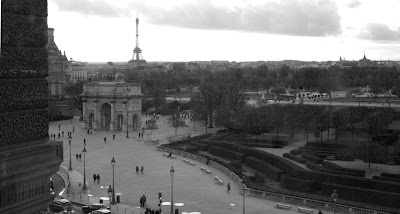 A view from the top of the Louvre, of the Arc de Triumph, with that horrid pylon thing in the background. I can never see it without thinking of Alec Guinness and the Lavender Hill Mob. 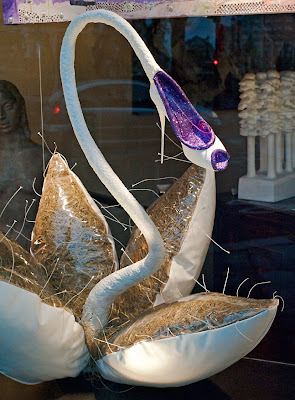 A creative shop window, in the Latin Quarter, clearly catering for shoe fetishists. 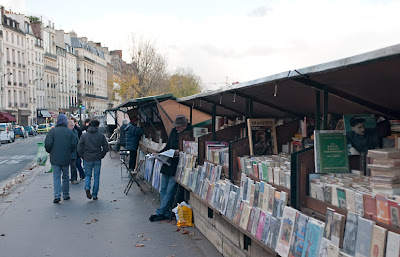 The left bank book stalls, exactly as I remember them from 1960, when first taken to Paris. The salesmen were just as enthusiastic in those days. All the merchandise looked damp.
With a two night stay, we had a lot to do in a short time, and since it rained more or less continuously, we spent most of the visit in the Louvre, the Musée d'Orsay and the Orangerie in the Tuileries.
I'm not a huge fan of the Louvre building - an arrogant structure built by a doomed monarchy. I know Cromwell was something of a swine, over here, but our Civil War and Interregnum did, at least, put a stop to the grandiose ideas of monarchs who really did believe they had a Divine Right and became absolutely corrupted by absolute power.
But as a museum, the Louvre palace works superbly. And I do quite like the funny glass Pyramid they plonked into the middle of the space enclosed by the wings. You can see through it, and that's charming. 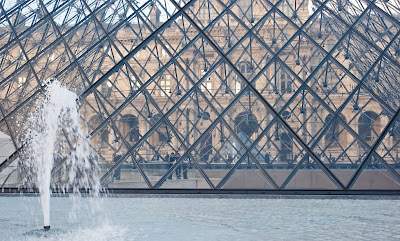 A peep through the Pyramid, at the Louvre museum.
The collection will move even the most cynical of spirits to tears of admiration and wonder. The PG, believe it or not, had never been inside. Various attempts to do so, in her life had been thwarted by perverse opening hours or other circumstances. So we did the 'must sees' first. The Winged Victory, Leonardo's quite decent portrait of that smirking girl, the armless venus and so on. But we continued with all the other stuff until my hip and leg cried 'Enough!' 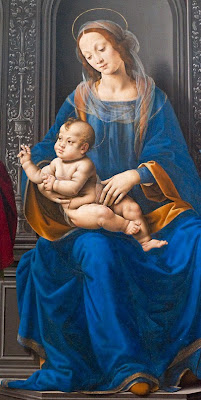 One is allowed to take piccies inside the Louvre, without flash, but I couldn't really see the point. Except for couple of hilarities. Here's a detail from the Florentine, Lorenzo di Credi's Madonna hanging round with a couple of saints. Not the male pattern baldness and sideburns on the babe. Hilarious! It's rumoured that the anti-smoking lobby had the ciggy painted out, leaving him making a rather dubious gesture. 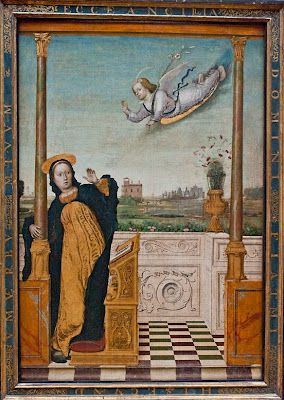 Braccesco's Annunciation. Gabriel's zooming down from Heaven on a surfboard frightened the living daylights out of the BVM, hence her shocked stance and expression. 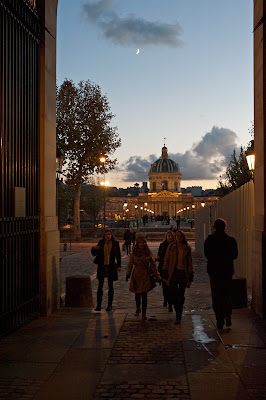 Leaving the Louvre at dusk after a hard day's art watching. 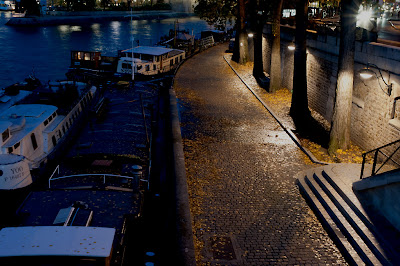 Paris by night. Romantic and sexy, but can you afford the restaurant prices?
We went home on Eurostar but managed to take in a couple of super shows. J B Priestley's When we are Married - farcical but brilliant. Roy Hudd is a particular delight as a drunk photographer. And Oscar Wilde's , An Ideal Husband with the peerless Samantha Bond. Oh what a wonderful Anniversary Break we had!
I'm listening to Benjamin Britten's 'Rejoice in the Lamb'
This time last week I was rather better off, but the poorer for not having yet visited the staggering collection of impressionists at the Musée d'Orsay. Never have so many Gauguins, Van Goghs, Renoirs and so on be gathered together in such concentration.
This week's film was Burke and Hare starring Simon Pegg. I love his work, but he only acted in this one. Doesn't know whether to be a biopic, a comedy, or gothic horror. But like sweet and sour pork, it's fun once in a while, even if you feel a bit sick afterwards.
And finally: A light lunch of Choucroute d'Alsace being enjoyed by a diner in Cité Europ, Coquelles, Pas de Calais. No, it isn't me, but I had something quite similar. Shocking, isn't it? 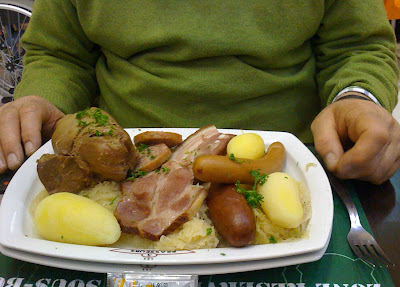