THE LOCOG DEVELOPED A FLAT TYRE 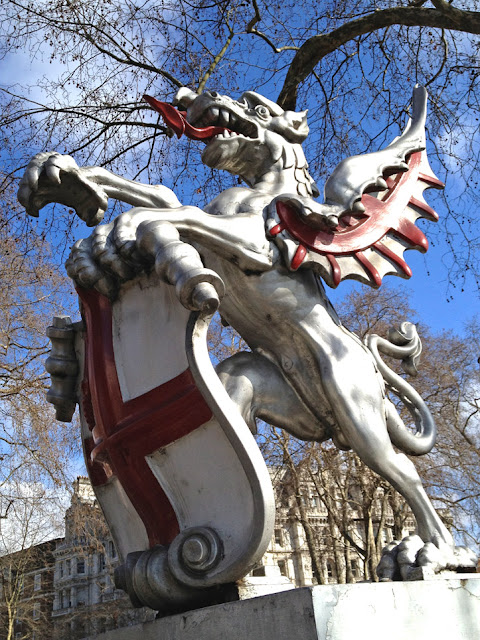 This dragon thing guards the entrance to the City of London – a small, but rather wealthy village which makes up part of our capital. Note the open claws, for grabbing money; the inefficient little wings – for flapping, rather than soaring; the slathering tongue, always wanting more; and those genitals, so out of proportion to the rest of the creature's body. No surprise then, that when you've been shafted by the City, it really, really hurts.


The City of London's motto is Domine dirige nos - 'Oh Lord, guide us' – but that doesn't seem to have happened for a very, very long time.  Or if it has, they haven't listened.


FIRST OF THE MID-SPRING BEAUTIES.
Michael McCarthy, in yesterday's Independent Newspaper discussed the seasons and how they can be subdivided. 'The first Orange Tips are out now,' he writes.  And they are. Yesterday, I spotted our first  for 2012.  It was a male – the female lacks the tangerine wing tips -– and was cruising the ditch below the hedge which lines part of our fenland lane.  It was probably wondering where the vegetation had gone.  The flail mowers worked overtime last winter, not only thrashing the hedges into lifeless stumps, but also sweeping along the ditch banks, shaving away the carpet of sweet violets, meadowsweet, celandines, hedge garlic, cuckoo flowers and grasses which all had helped to hold the steep sides together and which supported a rich biodiversity.

No doubt, dozens of Orange Tip chrysalids were killed, in the cauterising triple chop, so I suppose we should rejoice that there are at least some survivors.  And it's likely that the resilient dyke-side flora will recover - but when?  Meanwhile, where will the female orange tips lay their eggs?

Such thoughtless actions encourage me to work even harder at providing more refuge within our own boundaries.  And as long as creatures are being extirpated, albeit inadvertently by well-meaning but ignorant landowners and local authorities, it behoves us gardeners to make our ground more life-rich.  Obsessive tidiness seems to be as damaging, almost, as intensive cultivation. 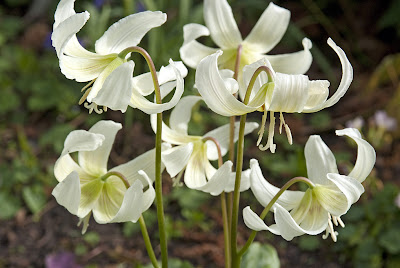 SYLVAN SEASON.
The soil in our tiny woodland garden is improving year by year and like wild woods, in April, it's looking extremely pretty just now.  For the third winter, I've refrained from raking off fallen leaves, allowing them to rot ever so slowly into the loam, making it leafier and moister. Signs of success include thriving trilliums and Cyclamen repandum – always a swinish species to establish – and busy dunnocks, wrens, robins  and blackbirds, going for invertebrate life among the decaying vegetation.
Our wood anemones are loving it; gathered bluebell seed, scattered three and four years ago, is producing the first few flowers and the true oxlips, Primula elatior, have gone berserk, hybridising with anything primulaic.  But this year's star, so far, is Erythronium californicum 'White Beauty.'  Lilies in miniature, and all the more enchanting for the beautifully marked foliage. 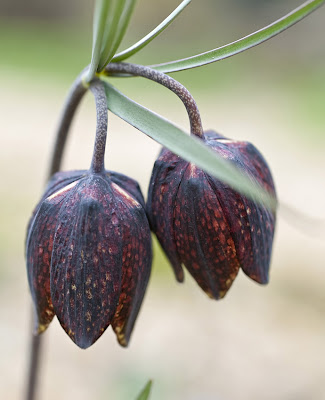 4. Fritillaria montana - I think - which bloomed in our shingle bank.  This it was supplied to me as F. thessala which it isn't.  Indeed, I'm not sure that name is valid.  It's not in the latest RHS Plantfinder but I suspect the correct name, for that green and brown-flowered species would be  F. graeca subspecies thessala.


IT'S A FAIR COPPICE!
When bashing about in my mini-wood, clearing away unwanted elder seedlings and thinning a thicket, I discovered three  ash seedlings.  Each is about 6 ft high, single stemmed and I'm pondering the notion that these should be allowed to stay and, in the unlikely event that I live for long enough, would be regularly coppiced.

We burn an awful lot of fire wood and ash makes some of the best.  It staggers me, that while country folk all over Britain are installing wood burning stoves – heating oil being suitable only for the wealthy or the spectacularly insulated – farmers, or anyone who owns more than half an acre of land, are not planting ash for coppicing.  Perhaps the megalithic DEFRA should make compulsory coppicing, for fuel, part of a payback plan for the generous subsidies we taxpayers hand over to Britain's farmers.

There's a lead time of at least 10 years, from planting, and initial wood yields are low. But if you look further ahead, it makes perfect sense to set aside small parcels of land for coppicing.  Every ninth year, strong, clean ash limbs would make superb logs and the places where these trees grew would become interesting habitats.


CHELSEA TRACTORS, TWATTICLES AND SUVS.
It was abandoned, rather than parked, in the car park of a certain mainline station. The wheels overlapped the demarkation lines on both sides, so the driver had managed to take up three parking spaces with a single vehicle. At £13 per vehicle per day, I reckoned he or she owed the railway company the best part of £39.

Whenever I see a large four-wheel drive vehicle, I feel a surge of anger welling up. My reactions are excessive but there's something about the smug, planet-wrecking arrogance of these things that get my goat. And the bigger they are, the hotter my ire.

And this one was a monster.  I've no idea what make it was, but the cheap-looking badge on the front suggested, for some reason, Detroit.  Every line made it ugly and it was obvious that a heap like this would be awkward to manoeuvre, sluggish and probably uncomfortable or worse, so soft-sprung that you'd be rocked to sleep at the wheel after twenty miles or a couple of gallons of juice.

These things are sometimes called Chelsea Tractors. Secretly, I've always called them – and those awful cowboy pick-up trucks – 'Twatticles' ie, vehicles for twats.  But the rhythm and imagery in the word is all wrong.  The 'icles' suggests something small, or anatomical, so I'm trying to develop a more fitting term.  I need something that suggests excessive, budget-busting waste; something grossly over-priced, over-hyped, completely pointless and a huge nuisance to those who are not involved and do not want to be.  And I've come up with a winner:  THE LOCOG. 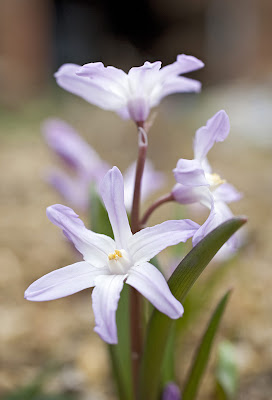 Chionodoxa forbesii 'Pink Giant' earlier this spring, in my gravel.

I'm listening to  The PG, cutting up fruit and carrots for lunch.  We are determined to become more sylph-like.

This time last year, 16 days after my hip replacement operation, I managed, with much help from the PG, to limp on crutches, round part of one of Lincolnshire's best patches of ancient woodland. The bluebells, says my diary, looked absolutely enchanting. We also watched longtailed tits gathering moss for nesting material.

This week's film was Fritz Lang's Der tiger von Eschnapur.  Made, or more accurately, re-made in 1959, this is an unremarkable story shot remarkably.  Lang disliked wide screen photography and one of the visual strengths of this film lies in its being 'full screen,' ie, nearly square, but with spectacular depth. This is especially telling in the many shots which are made from considerable height, looking down, or looking up.  But the story is pretty facile, Boys' Own stuff - potentate falls for beautiful dancer, but so does the handsome western architect. Potentate gets into a cold, jealous fury and commits wicked acts.  Doomed lovers run off into the desert.  The end.

But there's a sequel.   Bye Bye for nowI