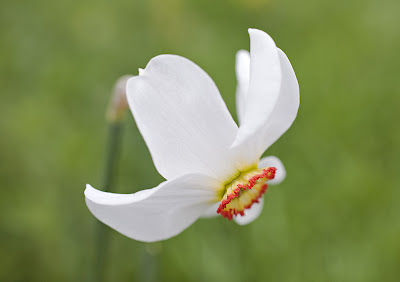 
Good morrow all, and a very happy Chelsea to you.

There's little excuse. Time vanished and ideas dried away  – 'Like to summer's rain; / Or as pearls of morning's dew, / Ne'er to be found again.'  (A minor prize for she - or he - who identifies the boring quote.  Victoria, consider yourself not allowed to answer first. )

There have been a few minor distractions in my life – Mother! Untimely frost!  A car crisis!  Don't Ask!

Also, a slew of unexpected tasks.  I'm appalled at the  mathematical pattern of gardening journalism over the past quarter century.  A bit - but not a lot - like those gases, in Boyle's Law,  the volume of work is inversely proportional to the rate of pay.  I've discovered that in real terms, my average rates, per thousand words are about 60% of what they were when I began this, my third career.

If it's the same for all garden journalists – and I have no reason to assume otherwise – it means we're all having to behave like the White Queen, in Alice who, if I remember rightly, has to run faster and faster to stay in the same spot.

I'm not moaning. It's good to get the work. But it is a little sobering.


Another vexing thing . . .
I've been answering gardening questions for much of my time in this weird life, on radio, television and  - since being given the 'bum's rush' from GQT - mainly in print. And I've come to the conclusion that we're all useless.

Why?  Because the same questions keep being asked every week of every year.  And if questions are constantly repeated, it means we're not giving the right answers.

Whenever I look over anyone's  fence, or peer into the serial cock-up that is my own garden, I see the same mistakes and the same misguided husbandry.  It's hopeless.  No one seems able to learn and as 'teachers' of a kind, that is fairly and squarely, our fault.  We should be ashamed.

In my own village – where there are at least six people far better at gardening than I – I saw daffodil leaves newly knotted.  The bulbs had been 'naturalised' ie, planted in a neat row in a close-mown lawn.  And when the flowers had 'hastened away,' the leaves were skilfully twisted into tight hangman's knots.

Bulb knotting was done routinely, half a century ago, but has long since been discredited because it can foster disease and doesn't help the bulbs.  But it also looks HIDEOUS, UNNATURAL, REVOLTING, PERVERTED AND BRUTAL.

And in the case of this particular garden, the whole effort was wasted because within a few days of  knotting the leaves were mown off and the lawn shaved.

Why aren't we hitting the targets with our answers?  And why does so much of my query mail look like this. . .

Why, when people ask for a plant identification, do they also ask whether the plant is a weed?  When any fule kno that a weed is identified not by what it is but by where it is.

Dear Mr Cobbin,
How can I kill. . .daisies/pheasants/mice/shield bugs/ants/snakes/lichens/moss etc.

Dear Sir or Madam
Now that Arsenic, Lead Arsenate, DDT and Nicotine shreds have been outllawed, how can I possibly grow crops?

Some folk want to douse their allotments with Jeyes Fluid, others want to know why I don't recommend sowing by the moon and a few attack me for not being organic or permaculturist.

And one final thing.
Why, when sending emails, do some folk think that the shift key and punctuation buttons don't work?

Try this for size:

I'm listening to Abba - Lord help me!  (Money Money Money, since you ask.  It's the Euro crisis, stoopid!)

This weeks film was Winter Light Ingmar Bergman's excruciating analysis of faith, liturgy, religion and relationships.  It's profoundly depressing – and when first saw it, in 1965, I was suffering Sophomore blues at Cornell Univeristy.

This time next week Chelsea will be over, as far as I'm concerned, and a good job too.

Thank you for getting this far. Bye bye!