Oh the bastards!! The swine!!! The utterly despicable, scumbag, chickenshit, sonafabitch, dumber than dumb, fatuous, pointless grey-feathered, cooing, wing-flapping IDIOTS!!!!!!!!!!! What did I do to deserve such aimless destruction?
Believe me, the only suitable place for a wood pigeon, Columba palumbus - even its name sounds stupid - is in a casserole where it should simmer gently, in a rich, red wine marinade, surrounded by diced carrots and parsnips 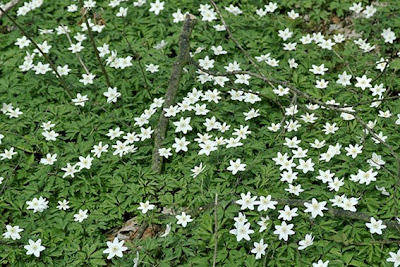 Anemone nemorosa in a wood in the Pas de Calais.
I'll get back to those ornithological nightmares in a moment. Christopher Columbus, Columba palumbus - Aaaaaaahhhhh!

Let me explain: I'm trying to build up a collection of one of my favourite spring wildflowers, wood anemones, A. nemorosa. After years of careful husbandry which involved developing my tiny woodland garden, building up the leafmould in its soil, conserving just enough shade to provide the right conditions, I've managed to make these plants - even the more miffy varieties - reasonably happy.For half a decade, the collection has been quietly building up and, after two damp summers, some of the original purchases have developed into satisfying clumps, dottings and even, in a few cases, drifts. For the first time, this spring, we would have had something to boast about.

Sought after varieties like the semi-double white 'Hilda,' the almost greyish lavender 'Parlez-Vous' and larger than normal 'Leeds Variety' looked particularly promising, budding up nicely and just beginning to show colour.  Until the week end.  NNnrrrrraaaagggggghhhhhhh! 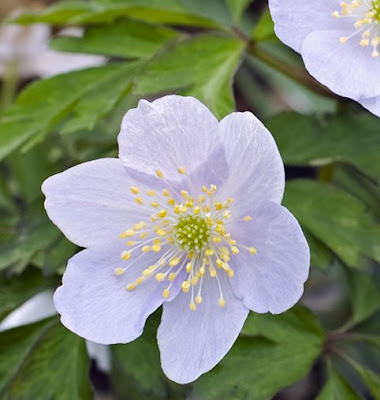 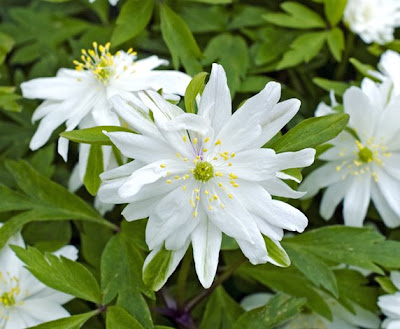 Anemone nemorosa 'Hilda'
That was when the blasted wood pigeons discovered them. The amount of nourishment, in a single, tiny wood anemone bud is negligeable. It probably takes more energy for the stupid bird to digest the thing, than the calories the bud can provide. But what do the damn pigeons know? And their call is irritating, too!  'Take two cows, David, take two cows, David, take. . .'  They can't even finish a sentence! 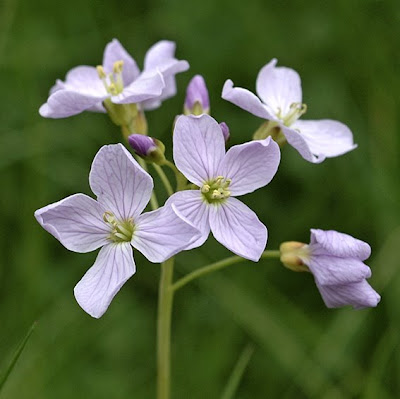 They got my cuckoo flowers, too.
And another thing! In various parts of my garden, particularly the damper bits, and in the grass, we have a flourishing population of Cardamine pratensis, cuckoo flower or lady's smock. And strike me a delicate colour of pale lavender mauve if those dratted, cretinous birds haven't eaten them, too. What is it with these pests????  I wish I hadn't handed in my shotgun, when we moved house, but there it is. All I can do is dance with rage and hope that the victim plants will recover and build up strength for a bigger, better display next year.  It'll probably just mean fatter wood pigeons.
Meanwhile, on a jollier note, the violets go from strength to strength. The common ones are blooming in all sorts of unexpected places and we now have the enchanting apricot coloured variety 'Sulphurea' in flower. I believe this one was spotted in the Vilmorin nursery, growing among the shrubs but that may be a myth. Whatever its origins, this is an extremely pretty sweet violet, but it lacks fragrance. 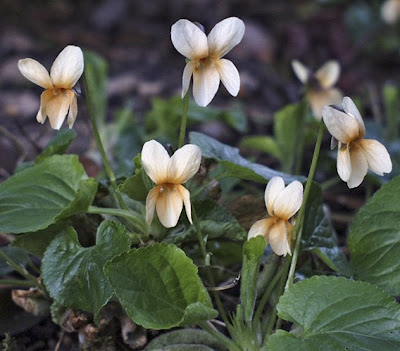 And have just read  Matthew Wilson's brilliant piece in April's The Garden on new approaches to grass, lawns, and so on. I do love a lawn, I have to admit, but hate the idea of killing everything in sight, just to keep it green.  To take my mind of the bloody woodpigeons, on Sunday, I hijacked a few more square metres of one of my lawns to make more meadow.
This day in 2006 I was at Wisley helping to plan an NCCPG (Plant Heritage) conference.
What busy little lives we lead, don't we?  Bye bye!
Posted by Plant Mad Nige at Monday, March 23, 2009