ZAPATOS VIEJOS AND OTHER OLD SODS

Ridiculous to be writing a post when the golden sun is kissing the burgeoning sowthistles in my borders and my pot plants are gasping their last because no one can be arsed to get out there and water them.  In this heat?  You must be joking!   It must be, ooh, at least 22ºC out there!
So, instead of honest toil – a few little pensées.   Oh, and apart from the top one, the pictures in this post have nothing whatever to do with the text, so please don't waste time trying to find a connection.  There isn't one - not a conscious one, anyway. 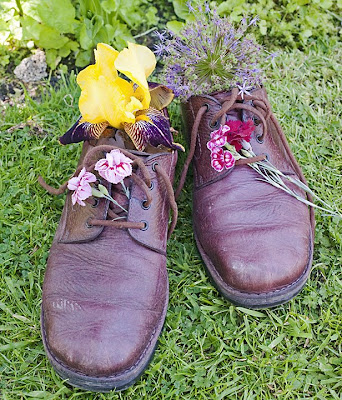 My semi-retired Clarke's Extra Wides - decorated to celebrate their new career in horticulture.
Pensée 1.  I was amused by Peter Seabrook, complaining in Horticulture Week, about being made to wear reinforced shoes, during the Chelsea build up. Harrrumph! However, I'm not going to rant, even though the Health and Safety Executive are obviously an F1 hybrid, raised in some hideously dark and hush-hush Government Laboratory using the Taliban and Spanish Inquisition as parents.
The safety shoes, I gather, hurt his feet whereas his preferred, old, comfortable footwear had served him, without injury or pain, for many a long year.
Now as any infantry officer will tell you, feet are damned important and for gardeners, choosing up with the right footwear is a challenge.  Wellingtons are fine for a quick winter foray, but are hopeless for extended work because they can't breathe, and the fit isn't snug enough.  Smelly feet and back ache result.
As a teenage garden nerd, I used to work in plimsolls (tennis shoes) until, one day, I plunged a large fork straight through my left one, and through my foot into the ground.  I thought it was a hospital job, but when I gingerly, but with difficulty, withdrew the implement, and then removed the plimsoll from my throbbing and bleeding foot, I discovered that the tine had slipped neatly between two toes and although there was much blood, the injury was no more than a graze.  My parents were astoundingly unsympathetic.   Plus sa change. . .
I confess to working in trainers, very occasionally, but only when doing delicate, girly things like dead heading or watering.  (That previous sentence is not intended to be either sexist or prejudiced.  I just like the epithet 'girly' and use it liberally.)  They also won't do for long term, serious gardening. 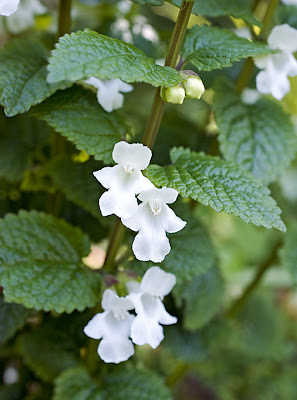 Melittis melissophyllum the delightfully named White Bastard Balm - not a racist slur, I promise.  My cats can't leave it alone.
Boots are a possible answer, but my feet are shaped like a couple of frying pans, and I have the damnedest time gettting them on and off.  If the phone goes, while I'm outside, the caller will usually have given up and hung up before I've managed to the first boot undone.  Stamp through the house with mud-caked boots, though, and you risk the wrath of the Photographer General, which can be more scary than the aforementioned Taliban and Spanish Inquisition put together.
So my preferred garden footwear are Clarke's Extra Wide Fit, lace-up shoes.  But at almost £70 a pop, I'm not about to buy new, just to wreck them outdoors.  So I've developed a kind of rotation system.
Shoes, as I'm sure you'll agree, reach a point where they are perfectly moulded to your feet.  So loved and comfortable do they become, that parting with them is unthinkable, even when you know that for Posh London Meetings, dinner parties and the like, they are getting a bit shabby.
When such shabbiness begins to draw sidelong looks from svelte colleagues, I know it's time they were put out to grass.  So this week end, I have promoted my current favourite pair,  let's call them Rodney and Lionel - actually, on second thoughts, let's not! - to spend the rest of their lives in horticulture.  I couldn't do this until I'd found suitable replacements - a couple of young whippersnappers from Clarke's in Victoria Street - also Extra Wide - which will do very well.
So my new garden shoes which have walked me through Singapore, Hong Kong, Capetown, Seattle, San Francisco, Penang, Kuala Lumpur, Doha and lots of places in Europe, are now enjoying a vigorously active old age in my garden. 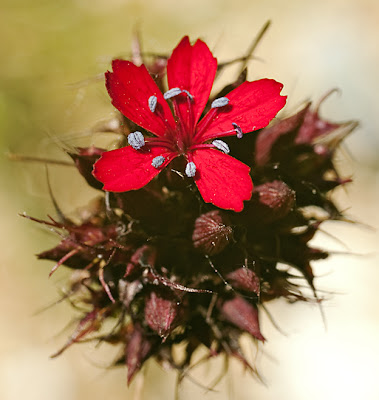 The first flower to open on our Dianthus cruentus
P 2.  You may have noticed that there has been a remarkable influx of Painted Lady butterflies in the past week or so.  They have been flying through the garden as if pepped up on something, barely pausing to sip nectar but zooming purposely on.   Most seem to be flying towards the north west.  They will have come up from North Africa, I believe.
P. 3  The swallows are definitely nesting in our garage.  They gave us the 'bum's rush' over the past two years, so we are flattered and delighted to have them back.  There is also a male blackbird - a tatty old thing - which is so tame that when I'm weeding, it comes within a couple of feet of my hand.  As we already have a robin which behaves in exactly the same way, I'm never alone in the garden.
P.4  I tried to watch Springwatch on television but gave up after the first programme.  There's much going on, in the wild, but most of the programme seemed to consist of assinine studio banter, sickening anthropomorphism and dodgy values.
That's more than enough pensées. 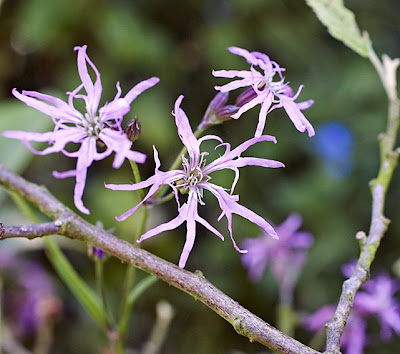 Self-seeded ragged robin, Lychnis flos-cuculi in the wood garden.
Im listening to the Ice Cream Van which arrives in our village every evening and tinkles out either the theme music from Match of the Day or Popeye the Sailor.  I'm always reminded of that lovely indie film Trees Lounge. I'f you've seen it, you'll know what I mean.
Yesterday's film was Pulp Fiction.  The PG wanted to see it, so I reluctantly agreed to watch as well.  Critically applauded, I gather, but include me out of that accolade.  Unconvincing story lines that didn't work, gauche casting, bloodcurdling violence for no apparent reason and it was so long!  I did NOT like it.  Clearly, I'm a Philistine, but so be it.
This day in 2006  I was showing Ian Hodgson, Editor of The Garden round my still somewhat embryonic, still relatively new garden.
Enjoy the summer gorgeousness.  Byeeeeeeee!
Posted by Plant Mad Nige at Monday, June 01, 2009