It's 9.31 am on Sunday and it's RAINING here in south Lincolnshire!!! The snow is thawing, there are puddles. Only a brief respite, I know, but wow! 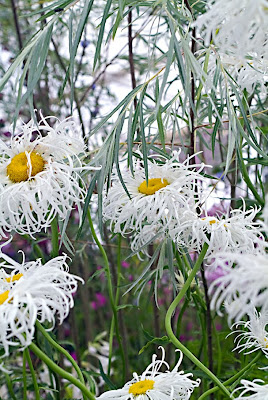 Leucanthemum x superbum 'Old Court' - see my list.
A-a-a-anyway. There I was, on Friday evening, minding my own business, fiddling with my new Photoshop CS4 software when my email thingy went boing, boing, boing and again, boing! A smattering of messages kept arriving, including some from such august and revered figures as plant guru Graham Rice, the irrepressibly herbal and organic Jekka McV and doubly Award Winning Journalist James A-S. Each message advised me to visit this 'ere URL.
Well, lah-di-dah! Another rant against the gardener's fave Aunt Sally, the poor old RHS. I'm not saying any more here - there's enough of a pompous riposte in my comment over there - but if you haven't already noted the flurry of invective, you might fancy popping over there for a look.
Meanwhile, back to jollier, more forward looking things.
A friend and colleague of mine - let's call him Phil - is doing an editorial hatchet job on an old, publication which is to be revised. To help him sound out the feelings of others, he asked if I'd kindly spend ten minutes - yes, ten minutes – to furnish him with a list of herbaceous plants that I feel are indispensible. It could, he helpfully added, be 5 or 50.
I mean, is he having a laugh?????
Oh, and I forgot to say - he's also asked other planty friends to do the same.
I should think there are, ooh, about 500 plants that are absolutely utterly must must must haves in almost any garden and if you have to limit your choice to 50, how on earth do you come up with a balanced and sensible list?
The answer is, you can't.
I decided that the knee-jerk or 'intuitive' response was best. In a state of herbaceous frenzy, I imagined what it might be like, if the good Lord - or Professor Dawkins - decreed that all the world's perennials were to become extinct, apart from fifty. And that I was responsible for selecting those fifty survivors - and worse, I had to come up with my list pronto, stat, indeed, within ten minutes. It's a sort of horticultural Desert Island Discs, if you like, but without drearily sycophantic interviewing.
My list follows - for your delection and amusement. However, if I had drawn up a similar list on a different morning, you could be sure that it would be different. Indeed, it's possible that every plant on this list would be absent on another one, drawn up in a different mood, season or at another time of day.
Such as it is, here it is. And being a verbose, garrulous twit, I couldn't help adding a few idiotic comments. Sorry about the lack of italics - couldn't be arsed to click the thingy.
1. Anemone hybrida 'Honorine Jobert.' OK, I know it's boring but I absolutely wouldn't be without it.
2. Kniphofia 'Toffee Nosed' or K. rooperi or K. caulescens. Must have a few rude pokers, even in the most genteel gardens.
2. Schizostylis grandiflora 'Coccinea 'Major'
4. Aster frikartii 'Mönch' Mine flowered steadily for 5 months this year and grew more than a metre high.
5. Aster 'Little Carlow' The lavender-blue flowers sweetly echo the touches of grey in the mildewed leaves.
6. Aconitum 'Sparks Variety' The darkest blue, longest lasting, most branched and therefore best.
7. Penstemon 'Andenken an Friedrich Hahn,' née 'Garnet' - most dependable and hardy of all.
8. Aquilegia vulgaris - best forms such as 'Adelaide Addison' - NOT nasty freaks like 'Norah Barlow'
9. Phlox paniculata 'Fujiyama'
10. Phlox maculata 'Alpha' and P. m. 'Omega' - still the best two, having the cleanest colours.
11. Lathyrus vernus - all varieties without exception.
12. Doronicum columnae -species, rather than named cultivars.
13. Centaurea benoistii - a gloomy bastard of a plant, but somehow, arresting. 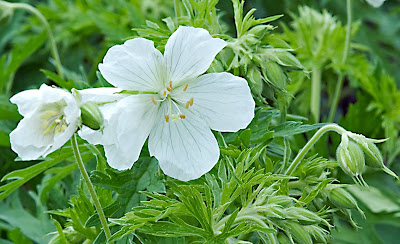 Geranium pratense 'Album.'
14. Geranium pratense - all varieties except those hideous flecked things. Wild ordinary by far best.
15. Geranium 'Jolly Bee' one step better than G. wallichianum.
16. Geranium nodosum for dry shade and free seeding for lazy gardeners.
17. Epimediium 'Amber Queen' - well, pretty well any epimedium, really, as long as it has good foliage.
18. Helleborus argutifolius. Many hybrid hellebores now dubious due to overbreeding. Doubles horrible.
19. Leucanthemella serotina. A big boy, but classy and late.
20. Rudbeckia laciniata 'Herbstsonne' Another big, late, lazy boy.
21. Rudbeckia fulgida - 'Goldsturm' or whatever. Seedlings often better than named parents.
22. Digitalis ferruginea or D. Pauciflora.
23. Chrysanthemum rubellum 'Mary Stoker' - taller, prettier than C. r. 'Clara Curtis' which is still OK.
24. Chrysanthemum 'Peterkin' (Pretty pale bronze offshoot from 'Mei Kyo' which is still excellent,
25. Senecio polyodon - every garden should have. Summer constellations of delectable rose-purple daises
26. Senecio pulcher - ditto, partly 'cos it flowers Oct - Nov. Same shocking pinky purple.
27. Achillea 'Terracotta' or 'Lachsschönheit' Don't mess with A. ptarmica 'The Pearl' - wild species A ptarmica much, much prettier.
28. Papaver bracteata 'Beauty of Livermere' - if you can find the real thing.
29. Papaver orientale 'Patty's Plum' or 'Snow Goose.' Big, vulgar, oversized and over-promoted but essential for June joy.
30. Leucanthemum x superbum 'Old Court' or Phyllis Smith' - the ones like shredded coconut are the prettiest.
31. Glaucium corniculatum for leaves.
32. Euphorbia palustris - doesn't need a marsh.
33. Euphorbia amygdaloides ssp robbiae Or plain wood spurge but NOT named cultivars which all get mildew.
34. Erysimum 'Apricot Twist.' most dependable wall flower ever.
35. Trollius yunnanensis.
36. Sedum 'Bertram Anderson' or 'Sunset CLoud.' (The old ones still seem the best.)
37. Salvia 'Blauhügel' - has performed amazingly for me and unlike most European salvias, a nice, clean blue.
38. Salvia uliginosa - yet another tall, lazy job but I think, probably, a girl.
39. Salvia patens - only the true blue one - all others are crap, in comparison.
40. Omphalodes cappadocica - ditto. NOT 'Starry Eyes!'
41. Smilacina racemosa or Polygonatum odoratum. Wild P odoratum better than anything named or hybridised.
42. Phlomis tuberosa. Lovely with grasses.
43. Eryngium 'Cobalt Blue'
44. Cephalaria gigantea. All scabious are great and with this species you get so much more for your money.
45. Roscoea purpurea or houmeana.
46. Primula vulgaris 'Dark Rosaleen' and 'Don O' Keefe' plus P. vulgaris ssp sibthorpii. (Three excellent prims for border fronts.)
47. Primula florindae - if that's what it's still called.
48. Lilium candidum, L. lancifolium and Lilium henryi - all good for lime soils; all seem to cope OK with virus..
49. Corydalis elata - never stops flowering and has status. Not quite so pretty as C flexuosa, but at least it grows and doesn't mope.
50. Nepeta nervosa. A miserable little swine until it has established itself - thereafter, peerless.
Whaddaya think? Comments, lists, brickbats - all welcome. 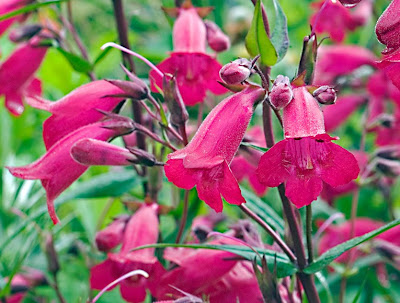 Penstemon 'Andenken an Friedrich Hahn'
I'm listening to The Photographer General's constant stream of questions as she grapples with the technical challenge of learning how to put music onto her brand new iPod. If it could take pictures, she'd have it mastered in a jiffy. As it is, I think the remedial classes will be going on until Easter.
This day in 1992 I had, apparently, just watched a new TV series called Old Garden, New Gardener. My diary entry reads thus: It should be called 'Old Garden, Clapped Out Gardener.' The shooting was immaculate, as one would expect from Mark Kershaw [a BBC Producer at Pebble Mill] but the subject matter was dreary and the scripts awful. So you see, we were moaning about crappy gardening programmes then, as well as now.
This week's film was Black Orpheus, Marcel Camus' masterpiece treatment of the Greek myth, set in Brazil's colourful and frenetic Rio Carnival. This is pure opera without the arias - tragic, certainly, but amid such joy, such colour! A peerless portrait of human irrepresibility. The leads, Breno Mello (Orpheus) Marpessa Dawn (Eurydice) and Lea Garcia (Serafina) were extremely beautiful, superb at dancing and were winning actors. Also, the kids were great.
Have a nice week!
Posted by Plant Mad Nige at Sunday, January 10, 2010