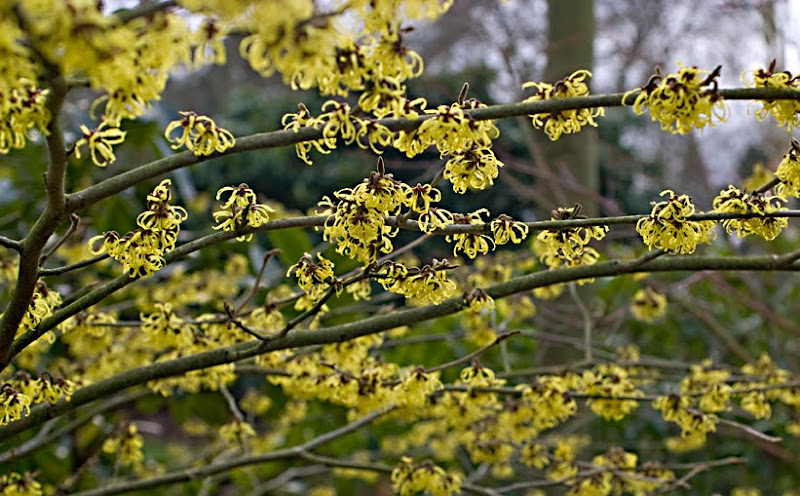 Witch hazel in flower at the RHS Garden, Wisley on 24th January 2008.
At last, my two witch hazels have come limping into flower. Hurrah! They're at least a month late - compared with these pictures, shot at Wisley, on 24th January 2008.
Actually, it would be more correct to say that they're later than we've become accustomed to. When I was little, February was the normal month for snowdrops and witch hazels. And yet I read in yesterday's Independent Newspaper a rather fatuous article explaining that bad weather has delayed spring, and that the flowers would terribly late this year, and would then all come in a rush. I mean, what? Eh? How?
The climate may be changing, but unless something cataclysmic has happened recently, the earth is still trundling its way round the sun at pretty much the same rate and Spring, therefore, still doesn't start until the March equinox which is about five weeks away.
We've had a decade - more - with unusually mild winters. Whether or not this climate change is man-made ain't the point. No. The real issue is that we've grown accustomed to abnormality. The current season we are enduring is more like the proper, ordinary, grim British winter than the preceding dozen have been. Accept it. Learn to love it. Such normality may not occur again for another decade. 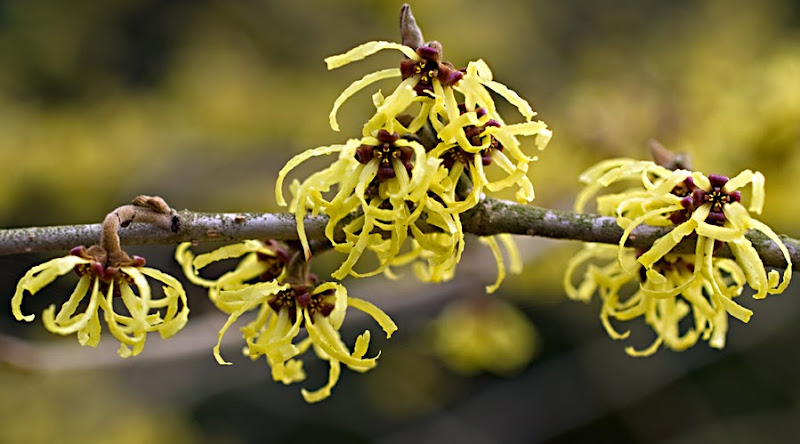 My favourite witch hazel, Hamamelis x intermedia 'Arnold Promise' has the prettiest primrose spiders, and plenty of them. I also grow 'Diane' whose spiders have been dipped into tawny port. With the sun shining through them, they're gorgeous but in dull weather, are too easily overlooked.
During the only ten minutes of pleasant sunshine, that we've had so far this February, I spotted something that to most people, would have been joyous and uplifting: a pair of House Sparrows gathering up nesting material.
They were outside my office window, squabbling chirpily - as spadgers always do - and tweaking at bits of dead grass and what looked like fibres from our knackered doormat. My heart sank faster than the value of the £. 'More of the bloody things on the way,' I thought. And then, of course, was stricken with guilt.
Birds, you see, are my big love - after plants. Well, OK, after plants and chocolate. So I should be nurturing the little darlings, not resenting them. After all, I record for the British Trust for Ornithology, and when I'm not knackering myself for the RHS or trying to earn a crust, or gardening, I like nothing better than to don drab clothes, grab the telescope and binos and head off to where there's likely to be an interesting bird or two.
And we've been told by all and sundry, just how rare the house sparrow has become. Well, it hasn't. There is no question that urban house sparrows have declined and you can find some interesting information about that on this website, as well as elsewhere. But in the countryside, and worldwide, Passer domesticus is still widespread and in my garden, it is one of the most serious, damaging and exasperating pests.
House sparrows nest in my eaves - and I wouldn't dream of interfering with them. We also have swifts, starlings and swallows nesting in our roof and all, but sparrows, are welcome. Sparrows are unwelcome, but tolerated.
Sparrows, in our garden, damage young seedlings, devour the buds of wisteria, spring shrubs, fruit trees, clematis and lots of other emerging shoots. They peck off the young foliage of all silver-leaved plants, and pull the shoots of emerging bulbs, sometimes managing to lift whole plants out of the ground. They attack crocuses, pecking the base of the flowers and tear off the petals of primroses, polyanthus and some anemones - particularly A. pavonina.
I've had to stop setting out bird feeding stations, because sparrows hog everything and I'm loath to encourage more of them into the garden. They are approaching plague levels. I have to tolerate them - but I resent their presence and wish they'd go somewhere else.
By the way - have you even noticed how grumpy and morose birdwatchers can be? I've never really understood it. I remember watching on Gibraltar a few years back, with Matthew Biggs - quite a keen bird man himself - when we were recording an Easter Special Gardeners Question Time for BBC Radio 4.
Each morning, at dawn, we'd walk up to the top of the rock, to watch migrant birds crossing from North Africa. And when we saw 17 Black Kites, all in the sky at one time, the exuberant Matt, leaped up, locked me in an enthusiastic embrace and we danced an excited jig. It was all so bloody beautiful - the Straits, Africa one way, Europe the other and this mass bird movement - a staggering feat of nature, all happening before our startled eyes. And yet, the hunched figures of the other early-rising birders barely moved. Their faces continued to be set in grim dejection as one of the great wonders of nature unrolled before their jaundiced eyes.
I'm about to listen to Britten's Rejoice in the Lamb.
This week's film was When Father Was Away On Business, original title Otac na sluzbenom putu. It's a treasure of film, set in what was Yugoslavia. A warts and all portrait of a Muslim Bosnian-Serb family, living in Sarajevo during Tito's stand-off with Stalin. The Zeitgeist is beautifully captured, though the film was made in the 1980s, and what is interesting is the racial and religious harmony. One was left wondering at what caused the awful conflicts later, after Tito had died and the whole thing broke up. If you haven't seen this film, I cannot recommend it strongly enough. You'll find more detail here.
This day in 1982 I bought a second hand British Leyland Ital for £3,375. It proved, by a very long way, to be the worst car we ever owned. Unstable, unreliable, ugly, tinny and hateful. To make a bad thing worse, its colour could only be described as turdy brown.
When will we see some warm sunshine?
Bye bye.
Posted by Plant Mad Nige at Thursday, February 18, 2010