HE INVITED ME TO PAT HIS ASS

Well the tip tip top of a beautiful January day to you.  Things are on the move at last but I've a little ranting to do.  First though, meet Diane. . . 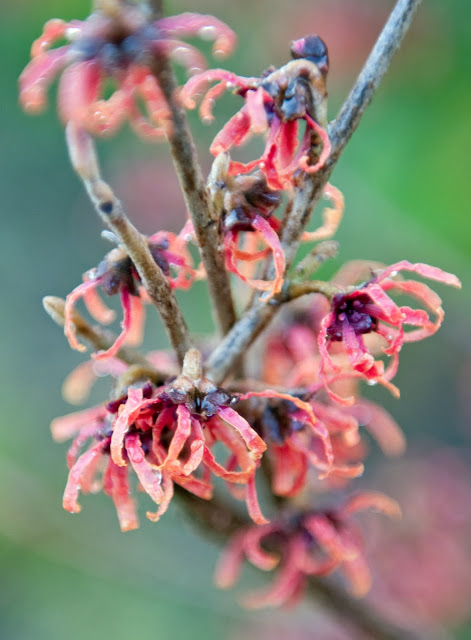 Hamamelis x intermedia 'Diane' in my garden yesterday.  She's lovely when the sun shines through the spidery flowers.  Witch Hazel?  Could it be called that because the petals resemble fingers crisped in a claw shape?  I never prune my with hazels, other than to remove a crossing branch.


AND A COUPLE OF JOLLY THINGS:

1.  Three Short Eared Owls delighted us yesterday when the PG and I watched them hunting the dykes along our Fen.

Seeing them cheered us up.  We've had a heartbreaking dearth of Barn Owls, following the hard winter of 2009 and the last six weeks of 2010.  Most afternoons, in the winter dusk, there would be several resident Barnies on the wing, down on our fen.  But not this year.  Nationally, a significant proportion of the Barn Owl population has perished or is in a weakened state.  In our parish, we've only seen one this year and less than half a dozen in the months leading to Christmas.

2.  Thunder Plants are Go!  Our aconites and snowdrops are popping up in increasing numbers and soon, they'll be exploding into a floral carpet. I'm reminded of making popcorn.  First, a few sporadic pings under the pan lid, but the rate accelerates until it sounds like the 'rifle's rapid rattle' at Ypres and the fills in a moment with hot, white, benodorous deliciousness.  (Benodorous? I can make up words if I want to, so there!)

3.  Wendy, my greenhouse, is beginning to smile again.  Her interior has been dank, chilly and the plants have looked miserable in the gloom.  But today, a Gazania opened, the heliotropes look as though they might win the battle with botrytis and a couple of pelargoniums are budding (see below.)  Time, soon, to sow the tender veggies.  And I'm already concerned about lack of space.

4.  Other plants blooming include Hepatica transsylvanica, Crocus imperati 'De Jaeger,' a single primrose, winter jasmine, Chimonanthus praecox, Viburnum farreri, Erica 'Springwood White' and Chaenomeles 'Rowallane.'  There are one or two others, but I won't bore you any more with those.

5.  I've survived almost a week on Twitter.  It's murdered my productivity, but I absolutely love it. 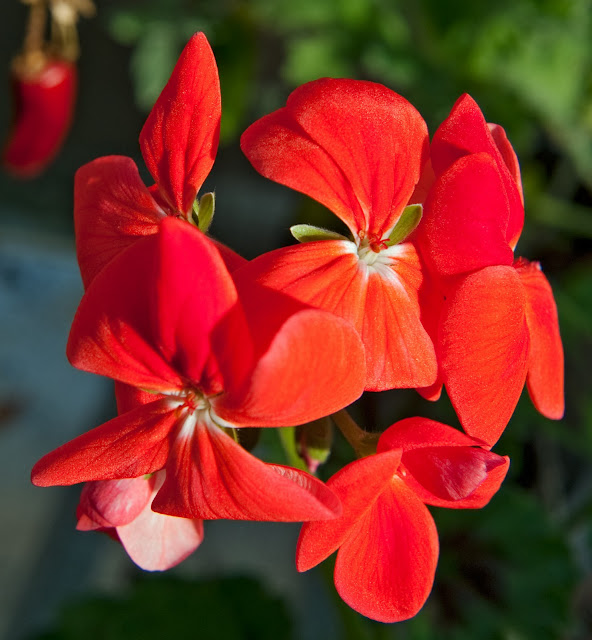 And 6.  A zonal pelargonium flower cluster. OK, it's just a crappy seedling I saved, mainly because it has excellent, dark leaf markngs, but I spotted this bloom cluster, in Wendy, and had to go and get the camera.  The Texture and colour is superb, and the smell of a zonal pelargonium is delectable, in a pungent, herby sort of way.  Funny how these are two-a-penny in summer, but positively drooled over in January.
NOW THEN, AHEM AHEM!
SOMETHING IS SERIOUSLY  NARKING ME THIS WEEK.
It has been nurturing itself like a nest of infant vipers in my basoom - and when you're a grandpa, your basoom does sort of develop a little more than you'd really consider manly, apart from the hair - which has migrated there from my head.  So I need to get both off my chest.  The hair and the vipers, that is.
The first concerns bad language.
Speaking as one of the most foul-mouthed, though hopefully creative swearers going, I do NOT mean using what our American friends euphemistically call 'curse words.'
Actually, it's about Americanisms that I rant.
Don't mistake me - I love American English and have read a reasonable amount of New World literature. Melville, Twain, Scott Fitzgerald, Hemingway, Steinbeck and the peerless and wonderful John Updike are all my heroes.  They share my personal literati pantheon with the likes of Hardy, Lawrence, Dickens, Greene, and so on. I know I haven't mention poets, or Milton or Shakespeare.
And I love the way verbs such as 'to slay' are used in American newspapers, and that a girl with a fringe has 'bangs,' and that whereas I leap out of bed sometimes, with a cramp, your American grandpa would be suffering from a charleyhorse.
But what I hate - really, really hate - is the adoption of what I'll call Columbian terms and expressions over here, particularly when we don't need 'em.  We've already got our own.  Let me give you a couple of examples:
The title of this posts suggests the beginnings of a dubious assignation.  But an 'ass' is a donkey - though its misuse as a term for bum or bottom probably grew up like 'goldarned' or 'dad-blamed' as a euphemism for a ruder word.  We have arses over here, derived from the old word, I expect, which is 'erse' or something similar.  But increasingly, people - English people - are writing 'Ass'.  It simply won't do, really it won't.  (Oh, and a bum over there is, of course a tramp. Alleluyah!)
Muffin is another one.  Muffins were invented over here and are a kind of baked bread which must be toasted and buttered before it is edible.  Americans, on the other hand, call over-blown cup cakes muffins - and that's fine. They have a perfect right to misapply the word if they want to.  But what I REALLY HATE is when OUR muffins are called ENGLISH muffins over here.  They are just muffins; they are NOT English muffins. .
A newsreader, last night, referred to a SIDEWALK, in Nottingham.  But we DON'T HAVE SIDEWALKS in nottingham.  They're called 'pavements' or footpaths.
We British fly in aeroplanes, not airplanes; small vessels are dinghies or sailing boats, they are not sailboats.
The affectionate name for a female parent is MUM or MUMMY.  NOT 'Mom' and we DO NOT HAVE SUCH THINGS AS HOCKEY MOMS OVER HERE.  (Probably just as well.)
Oh, and one more thing, going forward, pushing the envelope and out of a clear blue sky, draped with low-hanging fruit, can I just say this:
24/7 IS NOT A WORD.  It isn't even a proper number.  The words that mean the same thing include 'always' or, 'constantly' or the phrase 'day and night' - all have fewer syllables than twenty four seven.
And before I've finished insulting everyone, can I just ask whether anyone has ever invented a more ridiculous item of apparel than the classic baseball cap?  They make even intelligent people look like twats and if you wear them when you're over 50, you should hang your chapeau'ed head in mortification.  On a flight from Seattle to Heathrow, a man in the seat opposite me, wore one all the way.  He even slept in it.  I had to fight a mischievous urge to break my briefcase over his silly head. 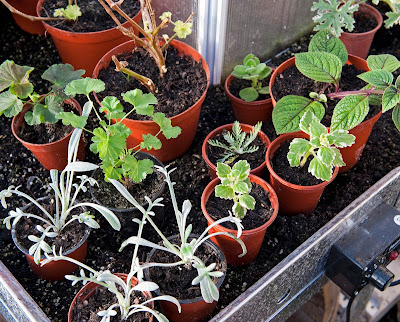 Rooted cuttings on part of my propagation bench, in Wendy.  I'll swear everything has doubled its size in a week.  Amazing what lengthening days and a little sunlight can do.

This day in 2007 I attempted to drive to Malvern to take part in a Judge's seminar but was thwarted by violent gales and the police closing practically every main road west of where I lived.  After five hours of abortive route-searching, I gave up and went home.  I had travelled about 60 miles in five hours.