DOGSLIPS, RINGTAILS AND BELLS OF SODOM

Just seen yesterday afternoon, flying over the fen.  A beautiful, sleek, female Hen Harrier - well, a ring-tail bird, anyway.  What a stirring sight.  She must be heading north to breed.  A first for us on this particular fen.  We've had several Marsh Harriers. All we need now is a Montague's. 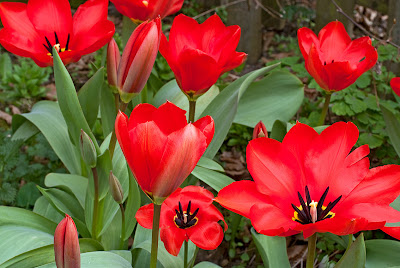 The PG's shot, today, of Tulipa fosteriana 'Madame LeFebre' aka 'Red Emperor' out in our garden.
Winter is done and for once, the weather has played the game and given us a delicious taster of spring. 'Simpsons' type clouds are scudding playfully across the azure firmament and with days now longer than nights, we can feel the sap rising and our little hearts going pit-a-pat with the crazy excitement of it all.

Sparrows are making a racket in our roof; there's a song thrush nesting in our shelter belt and we've seen several male brimstone butterflies desperately looking for love. The greenish white females are so fat and lazy, sitting around, barely bothering to fly, waiting for their hyperactive, sulphur-clad Lotharios. It's a wonder that species breeds at all.

The garden's full of joyous rapture - no wild thyme, but 'oxlips and the nodding violet' by the million. Some of my rare and special daffodils are emerging and in the mini-meadow, yellow rattle is germinating like cress.


All should be a transport of delight but I'm a bit cross and I'll tell you why.

On Sunday, the PG and I decided to celebrate the first day of spring with a walk in one of our favourite local nature reserves known as Thurlby Fen Slipe.  (A slipe is the strip of land which borders the raised banks of a river.)

This little reserve, only about a kilometre long is extremely narrow and follows the course of the River Glen.  Some interesting flora grow there but the slipe's most endearing feature are the tiny grass meadows which skirt the river and which are thickly carpeted with cowslips in spring and common spotted orchids in summer.

We heard the first chiffchaff of the year calling in one of the small spinneys, watched a single corn bunting trying to distance itself from a couple of closely related yellow hammers.  Two stock doves were canoodling - a bird species for which I have a totally irrational soft spot.  I think it's the exquisitely blended shades of slaty grey and the fact that you almost always see them in twos. 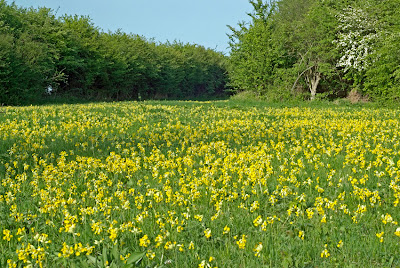 The cowslips at Thurlby Fen Slipe  Nature Reserve shot by me a couple of years ago.
We didn't expect to find any cowslips in bloom - though there was a single precocious stem that had bucked the trend and opened early, a little taster of the glories to come.  But we could see the rosettes of cowslip leaves, wrinkled and dead flat, keeping their toe-hold in the short turf.

Wanting to have a closer look at this part of the sward, and to see how many plant species i could spot, along with the cowslips, I dropped to my hands and knees and that's when it happened:

Suddenly, I was nose to turd.  A massive coiled dogshite insultingly and damagingly dumped in the middle of the exquisite meadow flora. And once I was down on the ground - and with my hip being so useless, that in itself is something of a major operation - I realised that the whole place was a minefield.  There was barely a couple metres between craps.  I stood up in disgust and we moved on.

And the further we travelled, the more dog crap we saw.  So instead of watching for marsh tits, or looking to see whether the willows were busy with hungry bumble bees, we found ourselves on a sort of turdicular treasure hunt.  'Look, two more by that tree, and another - watch out, it's right in the path.' etc. etc.

I love dogs.  They're adorably filthy-minded animals with absolutely not one shred of pride, constantly ready to shag, if they're males, and eager to swear undying loyalty and friendship, until a rival offers them a titbit. A bit like blokes, really.  But I hate irresponsible dog owners.  The should be frog-marched back to the scene of crime and forced to clean up the mess.

I wonder if the owners of these dogs realise what damage this constant shelling of the natural ground with nitrogen-rich excrement actually does.  In a vast land area, I don't suppose it matters that much.  But in a little nature reserve like this, the harm is more significant.  Enrichment feeds grasses at the expense of most broadleaved plant species, so every time a dog evacuates - and some, particularly Labradors seem to have more coming out than there is food going in! – the balance is skewed further in favour of grasses and nettles. 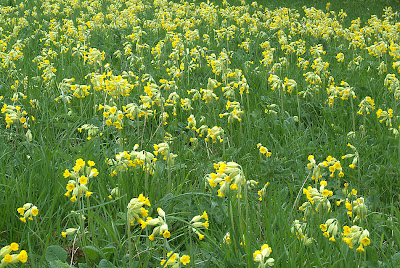 Cowslips smell a little like freesias, but its a fainter, gentler scent. If you analyse their beauty, it doesn't add up to much, but because they are the very essence of spring, you can't help but adore them.


On our way back we passed one of the perpetrators.  He had no fewer than six dogs with him, not one on a lead - despite the notice on the Slipe entrance which states that dogs are to be on leads.  In a moment, the mutts had spotted the PG and me and, despite his commands that they stay, they were all over us, jumping up, licking our hands and being generally rather sweet and soppy.

Coward that I am, I couldn't make myself remonstrate with this man.  He had a slightly scary glint, and worrisomely cropped hair and stubble, like something out of a Dickensian prison.  Part of me didn't want to spoil his and our afternoon with distinctly un springlike acrimony.  But most of me was just plain chicken about causing a row and possible punch up, or being licked to death by his soppy dogs.

So we went home.

This week's film was Jane Campion's Bright Star.  I had looked forward to this story of Keats' relationship with his neighbour, Fanny Brawne, with feverish anticipation. Certainly a film worth seeing, if only for hearing fragments of Keats poetry so beautifully read, but I was disappointed and it's hard to nail down exactly why.  The costumes - all 1820s 'Empire Line' stuff and big hats - were super and I loved the setting. I think the two main problems were the screenplay, which really didn't work, for me, and the casting. Keats (Ben Whishaw) just didn't do the poet for me.  He seemed utterly wet, and I've always imagined Keats as being more gutsy, despite the tuberculosis.  The story limped and I had to keep reminding myself that this was one of the greatest stories of thwarted love and tragic early demise in history.  Oh Lord, how I do ramble,  Sorry, sorry.

This time next week with luck, I'll have had my hip replaced and as a result, will be less grouchy.  But don't bank on it!