PERFERVID LEMURS ROLLICKED AMONG THE PHEASANTBERRIES 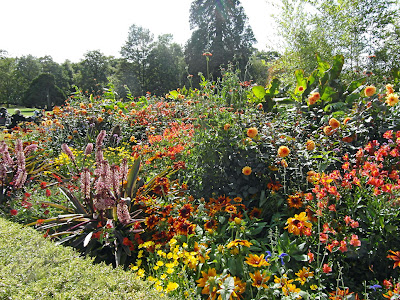 What ho!  Top of the whatsits to y'all!

The drought continues.  Our autumn perennials are dying before they flower, the lawns are brown and I think I'm suffering from tomato overdose.  I never thought I'd say this, but frankly, I'm glad summer is over.  Roll on porridge mornings, woolies and mud.

A juvenile cuckoo is still hanging round one of the few thickets, down on our fen.  It looks out of place, and I fear for its ability to make it, down to Africa.  Our swallows are also being terrorised by a hobby which is lurking about the village in a most ungentlemanly fashion.  It's a tiercel, I think, ie a male – smaller than the female – and flies with frightening speed on sharp, curved wings.  When the swallows move south, it will probably move with them nothing like having your lunch accompany you.

I believe some of you had a struggle with last time's film quiz, and got cross when you discovered that the film was not exactly mainstream.  So this time, I thought we'd have two questions, one totally easy; the other perhaps a little more challenging, but still, I hope, elementary.

And remember - No Googling!

First, then for dyed in the wool cineastes, what film does this line come from?

What we have here, is failure to communicate.

Second, for an easier ride:

Who said this, in which film?  And for brownie points, to whom was it said - and that, in a way, is a kind of a trick question, except that it'll make it easier for you.

That evening I had to run nearly all the way to the station. I'd been to the Palladium, as usual, but it was a terribly long film and I was afraid I'd be late.

Actually, on balance, I think they're both as easy as each other.  Anyway, good luck, and the usual tray of home-baked eBrownies to the winner. 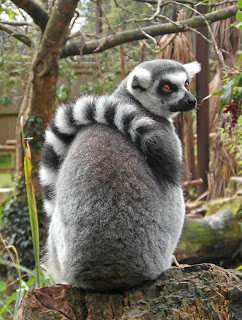 A ring-tailed lemur, Lemur catta in the Madagascar Enclosure, at Cotswold Wildlife Park.

I spent one of the most delightful days of the year, on Tuesday, at Cotswold Wildlife Park.  We – that is, members of the Royal Horticultural Society's Tender Ornamental Plants Committee – were guests of the park, just outside Burford, of the A361.

We were greeted by Reggie Hayworth, MD, and then escorted by fellow committee member and Head Gardener Tim Miles, first on a train ride, round the estate, and then on a more detailed walk.  Tim has a long experience of zoo gardening.  He once showed me round London Zoo, when he was head gardener there, and we ended the day cuddling baby chimps and discussing the picky eating habits of dormice with the then Director, Joe Gipps.

In his 13 years at Cotswold W P, Tim has achieved a quiverful of miracles.  The park retains much of its 'parky integrity' with mature trees and grassland unspoilt, despite having white rhino grazing behind the ha-ha, instead of cattle.

He has also managed to develop the most naturalistic planting possible in the animal enclosures.  In the tropical rainforest hot house, for example, the lianas and shrubs  and monocots all blend perfectly, despite being from disparate regions, and look perfectly at home.  Bromeliads jostle with old world plants but it doesn't matter.  The feel is the same and the animals and birds clearly thrive in the most home-like conditions possible.

Tim's planting prowess has resulted in spectacular borders, containers and the biggest, and  most tastefully colour-coordinated hanging baskets I've ever seen.  You can be rude as you like about hanging baskets – and the likes of Roy Strong usually are – but these are really special.  Soft, bricky colours in one set, sky blue and white in others, all the picture of health, all vast, all set to last until November.

Mike Holmes, of Double Eight Nurseries gave us a talk on biological and integrated pest control on industrial scale glasshouse production and then, after our meeting, we all went home.

A collared brown lemur Eulemur collaris (I think!) Check out that tail!

I'm listening to Laura Marling singing Salinas from her latest album A Creature I Don't Know which is really interesting - a bit Joni Mitchell-ish.

This time next week, I'll be watching and enjoying Der Ring Des Nibelungen in Berlin.

This week's film was Monsoon Wedding.  It's a delicious portrait of an extended Indian family wedding written by Sabrina Dhawan and directed by Mira Nair.