And a very happy Advent to y'all!  It's a time of expectation, waiting and hoping, I'm told.  And also a time to contemplate death.  Hurrah!

And a huge THANK YOU to the scads of you who so kindly sent messages of congratulations on my AMAZING, SURPRISING and MOST GRATEFULLY ACCEPTED - though wickedly undeserved - gong, at this years Garden Media Guild.  Yer could 'ave knocked me dahn wiv a fevver, yer honour, 'onest!

London, despite the strike, was still a joy to visit, despite the police closing the West End for the strike, and despite my being stuck, in traffic, in a cab with the cabbie who could even out-talk me.  When the diatribe began with 'I'm not a racist, but. . .' I knew it would be a long, hard ride.  It took 76minutes to get from Oxford Circus to the Barbican.

But hey - how lovely is London? Where else are there so many theatres staging good productions? So many art galleries and museums absolutely free to enter?  Such a range of restaurants from absolutely terrible to sublimely good.

Click any picture for a larger view.  (Perhaps you'd prefer not, though,with the 'bottom' picture.)

As daffodillydallier and lake-lover Bill Wordsworth wrote:
'Earth has not anything to show more fair.
Dull would he be of soul who could pass by
A sight so touching in its majesty:'


Well, OK, fair enough . . . you're right – this is not the view from Westminster Bridge and the piccy was not snapped by Wordsworth but by me.  But you can still see that. . .
'Ships, towers, domes, theatres, and temples lie
Open unto the fields, and to the sky;
All bright and glittering in the smokeless air.    Well, nearly, anyway!


I shot it on Hungerford Bridge on my new iPhone 4S camera which is not a bad gadget.

On Tuesday night, I dined at Chimes in Pimlico, a decent eatery which specialises in English food and serves a range of draught, flagon and bottled ciders.  Yorkshire pudding, eaten as a starter with onion gravy, is one of our tastiest dishes, if properly done.  Chimes offered a variant - with grilled prawns in a sauce - which sounded so disgusting that I simply had to try it.  What a delicious surprise! The flavours blend and contrast beautifully and their Yorkshire pudding was exactly as it should be - a puff of red hot hot air, packed in thin, crisp, fragile, aromatic, flash-baked batter.

Liver, bacon, mash and gravy followed –  a favourite of mine and since the PG abhors liver, is something to go for when at a restaurant.  It was lovely, too, but I was sad about the mash.

People don't understand the subtleties of a good mashing potato and either adulterate it with flavour too strong for the potato, or cream it into a slick, slimy gruel or don't add anything to bring out the 'spuddiness.'  I like it mashed con brio but always by hand.  You have to knock air into it.  Butter is better than marge and you must add milk, too.  For seasoning, I use a small pinch of mustard powder per double serving and – this is really important – freshly ground nutmeg.  You don't necessarily taste the spice in the mash, but it tones up the gorgeous potato taste.

I drank Chimes own house cider, which was draft, semi-dry and had the necessary borderline taste between an abandoned apple box and old stilton rind.  (This is meant to be complimentary and not at all an adverse criticism.  To me, good cider tastes like that, whereas bad cider tastes like sick.)

I also drank a very dry, strong cider from Biddenden, in Kent, which was arresting, challenging and actually extremely pleasurable, despite the stilton rind.  By the end of the glass, I didn't really care about anything.

That's my informed analysis of the West's economy.  There's nothing more to say except that if we thought we were all utterly shafted before, when the credit crunch began, we were wrong.  That was just the starter.

The main course is yet to come, apparently, and the only important question is this:  when everyone in Europe is having to carry their cash – be it NeueDeutschmarks, NouveauNouveau Francs or Thanatodrachmas – to the shops in wheel barrows, will £50 be enough, here in Britain, to buy a can of baked beans?  My suspicion is that it won't, and we'll end up well and truly in the cack.

Perhaps we deserve it, but really, I do wish Merv could, well, you know - get a bit of life into his deliveries and cheer up a bit.  At least things wouldn't be quite so suicide-inducing, then.

This time on Wednesday I was still reeling from having been given an award, my first ever, at the Garden Media Guild Awards Lunch.  I was guest of Thompson and Morgan - thank you thank you thank you T&M -  and was privileged to sit next to the frighteningly handsome, erudite,  jolly and award-winning James Wong, author of Grow Your Own Drugs.  We were treated to one of his pieces to Camera, about the biochemistry of the daffodil, which could have been awkward and ridiculously stagey, but which flowed like a ballet solo at Covent Garden.  To make such a contrived piece appear so natural and spontaneous is seriously good television.

This week's film was the first part of Ingmar Bergman's Fanny and Alexander.  We often watch this in early December because the first act takes place at Christmas in the house of a large, wealthy family, in 1907.  The photography, the staging, acting and direction are faultless.  And there's more Scandinavian, self-destructive Angst per scene than you could throw a lorry load of sticks at.  What more do you want, in Advent, than Protestant gloom and a veneer of festive fun laid over a morass of despair, hate and sexual impropriety?

And that's more than enough from me.  But look at the picture below, and then tell me a quince isn't a suggestive thing! 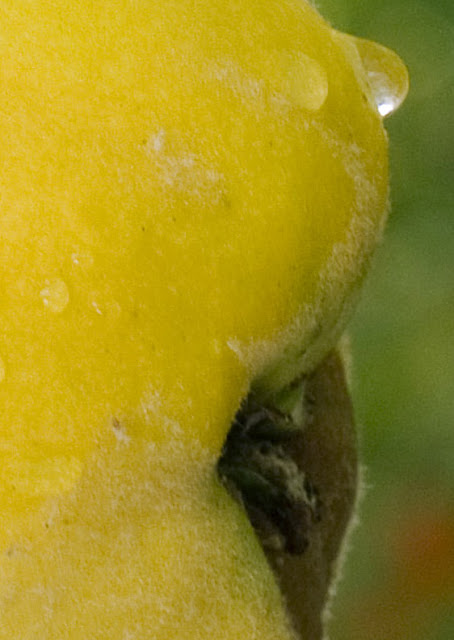