Just a quick post this week, mainly to wish you all a very productive, fulfilling, and enjoyable Easter week-end. If you plan to be devotional on Friday, may your devotions be devout; if you're intending to listen to the Good Friday Music from Wagner's last music drama Parsifal, you'll be in excellent company, 'cos that's what I plan to do while the weather commits its usual acts of Easter malice outside. Misery finds comfort, don't you think?
And I haven't edited or read this through, so apilogies for bishes, howlers and cock-ups. 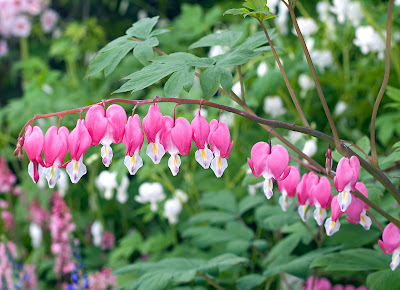 Dicentra spectabilis - described to me once, in Sri-Lanka, as the 'lady-in-boat-type-flower.' By the time you read this, any that have come through will already have been damaged by April frost.
At the beginning of this week, I thought spring flowers would be coming out ten to the dozen, by Easter. But that was before this maddening rump of frigid air crept back down from its lair at the top of Norway. So now we have gales promised, possible snow and the prospect of a nasty Easter, weatherwise, that is.
Several odd and startling things have happened, so I'll list them here.
1.) I was telephoned by someone moderately illustrious and asked if I'd be willing to take Julian Fellowes to lunch. I can't say more, but that's a name that simply has to be dropped. I can also give him a gentle bollocking for not providing subtitles for the 'cloth-eared' on the DVD of Gosford Park. I've watched it three times already, dammit, and still only picked up about half the dialogue.
2.) I went for a hobble in Bourne Woods with my elder son and the Photographer General where I heard, even without my hearing aids, several chiffchaffs singing. First this year. Also saw a willow tit (there are both marsh tits and willow tits in this wood and telling them apart is a bit tricky. One has a rugby forward's neck, the other skulks more.) The chiffies' 'dit-dat-di-dah-tit-tat-dit-tat- tew' reminded my that I didn't hear or see a single willow warbler in that wood last year whereas 20 years ago, they were more frequent there than chiffchaffs. We also heard a tawny owl calling in the middle of the afternoon. It's an omen, I tell you! An omen.
Primroses have come into bloom in the wood, pretty well on time, I'd say, but we only saw one, single wood anemone. I have more of those blooming in the garden.
3.) Only two of the seven trilliums that I paid telephone number prices for last spring have emerged, despite their having been planted in what I would have regarded as trillium heaven - ie, moist but well drained, neutral woodland soil which is rich in leafmould. I have no hope of ever seeing the others again. One of the two that have popped up only has two leaves, so I suppose you should really call it a billium or a duollium. I won't give up on them, but I am rather resentful. All the other woodlanders seem fine.
4.) I heard today that a pet shop lady was fined £1,000 and had to wear an electronic tag for three months for selling a goldfish to a 14 year-old boy. A criminal record, for that???!!! Read about it here. Apparently, the kid was a plant and had been employed by the Morality Police on the lookout for hardened criminals who make a habit of selling pets to minors.
What a nasty little sneak that 14 year-old must be! I'd like to box his ears for deceit but would probably be charged with child abuse and locked up with a burly safe robber for years. Anyway, wasn't using a minor as bait somewhat abusive? What kind of moral message does it give him? And also, what happened to the goldfish? I think we should be told.
We have SO got to get rid of the meddlesome, power-crazed, spying, prying, snooping, bludgeoning, moralising culture which seems to exist in the 'deep heart's core' of anyone in a position of authority. If that lady is a criminal, for selling a live fish to an adolescent boy, then I'm a banana.
5.) Cop this for an interesting bit of news. A tomato hybrid with a 60% increase in yield, and sweeter, too! It looks like an exciting break-through, but it will be sorely needed. If we are to feed ourselves properly in the future, yields over-all - but in particular, of cereals - are going to have to double. And the chances of being a meat eater, in the 2050s and beyond, seem to be diminishing for all sorts of reasons. Interesting. But I'm glad we're having roast beef for Easter Sunday and, hopefully, sausages and mash tomorrow. 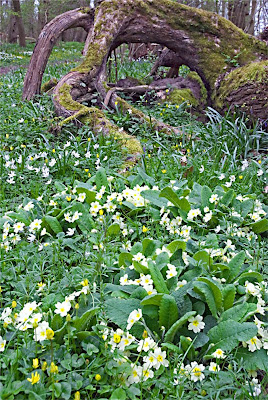 Not this year! The woods last April.
I'm listening to Bach's Saint Matthew Passion. Well, it is Holy Week - not that I'm religious or anything. I just love the music.
This day in 1986 It was Easter Bank Holiday Monday. I showed the Princess of Wales's sister's mother-in-law round our garden and watched Cosi fan Tutti on television. We ate pork chops for supper.
For this week's film I was going to mention the remarkably good adaptation of J. M. Coetzee's novel Disgrace which we watched on Sunday.
But in yesterday's vile rain, instead of gardening, the PG and I sneaked off to see what we thought would be a 3D presentation of Avatar. It wasn't in 3D and I'd been warned that it wasn't a kinemaphile's thing at all. Quite the opposite. So I entered the theatre with a knowing sneer forming, but that was soon wiped away. Yes, the story is dreadfully thin, and yes, the acting is wooden and, OK, perhaps the characters are just a scriddick cardboardy and the music is dreary and relentless. And NO I will NEVER forgive James Cameron for the execrable Titanic. Never! But Avatar I really enjoyed. The scenery and CG stuff is absolutely spectacular. The life forms, both plant and animal were totally fascinating. (Whoops, I nearly said 'stunning!' tut tut!) My erudite son tells me they were designed by Wayne Barlow, an artist who specialises in science fictiony things. Well, good on ya, Wayne! 166minutes not exactly wasted. Plus we had a tasty curry on the way home.
Have a lovely Easter/Passover or whatever, y'all!
Posted by Plant Mad Nige at Wednesday, March 31, 2010