Well, my lovelies! What a lot of neglect and idleness on my part! I notice it's nearly ten days since my last post, apart from the spam whinge. And thanks to all those who advised me on that problem. I hate the idea of having to moderate comments - people should have freedom on the internet, but if the spams continue, I might have to moderate. But if I do, I promise not to hold back comments intended to be rude or which disagree. You'll have to take my word on that, but be as rude as you like. 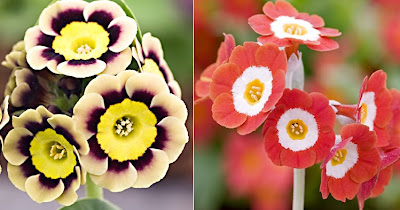 A couple of auriculas: Left, 'Sirius,' right, 'Robbo.'
Now then. Gosh and begorrah! I think it's time for a bit of thought on Alien Invasions.
I'm sure you are aware, as we all are, of the threat posed by invasive alien species. Naturalist Edward O Wilson, his website is here, lists five main causes of extinction which you can remember with the mnemonic HIPPO:
H = habitat loss
I = invasive alien species
P = pollution
P = population growth
O = over-harvesting, of natural resources.
Alien species are responsible for horrendous extinction problems in the UK. The antipodean Crassula helmsii for example, is wrecking lakeland habitats; Himalayan balsam, Impatiens glandulifera harms our water courses by smothering natives and of course, we have the Victorian plant collectors to thank for the more widespread scourge, Japanese Knotweed.
More recently, the harlequin ladybird, Harmonia axyridis, a thug from Asia introduced to Europe, apparently, AS A BIOLOGICAL CONTROL, has established itself comfortably in Britain and looks set to eat the population of native ladybirds, and then move on to a large range of insects.
Keep that little point in mind, if you kindly would.
Now then. I heard recently, about another alien species, Aphalara itadori, a plant-sucking psyllid which will destroy the Japanese Knotweed. And DEFRA, in its wisdom and sound judgment, is to release this into the wild.
Anything coming from that monstrous megaministry fills me with fear and loathing. It was they who cocked up the payments to farmers, thereby incurring a hefty fine from Brussels which we taxpayer had to pay. You can see earlier rude comments about this horrendous Government Department here.
That gives me serious misgivings. DEFRA says the psyllid has been tested on important British food plants. Oh? So that's all right then. No worries there. Ah, but what about the rest of the British flora? And what about our garden flora?
The only important British food plant I can think of, which is related to knotweed, is rhubarb, so I hope they've tested it on that, in particular.
And what about the many, superb Persicarias which we grow in our gardens? Will this psyllid munch into our native wild bistort? Will it ruin Persicaria affine, or the magnificent, rat tail flowered Persicaria amplexicaulis? Gawd, I hope not!!
And what happens if (?when) this species makes a tiny genetic shift and produces youngsters which like other genera? What then. A beet sucking psyllid on the way? A potato psyllid? Probably not, but you never know!
One of the main reasons given for not using genetically modified crops, in the UK, was the danger of 'modified genes' getting into the wild. Nobody managed to explain how that could happen, but it was still pedalled as an argument for banning them 'A Pandora's box,' we were told, 'and once it's out, there's no putting it back. 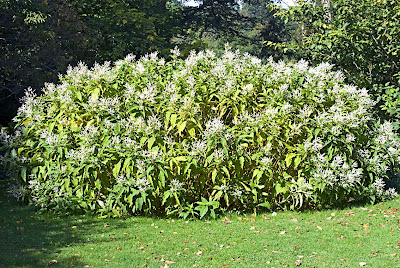 Persicaria polymorpha
will it succumb to the psyllid introduced to zap Jap. knotweed?
Well, it's exactly the same with this damned psyllid. You can let it go, but you can't control it and you certainly can't get it back. Thinking you can do so is about a daft as believing you could re-capture and destroy all the harlequin ladybirds. Or as stupid as trying to cull badgers, thinking that will cure Bovine TB - and that - Welsh Assembly please note - in the face of scientific evidence showing that attempting to cull them causes perturbation which actually increases, the spread and risk of TB.
Alien species, released for 'natural' pest control have been disastrous in many parts of the world: cane toads in Australia, Mongooses in the Caribbean and Mauritius and Harlequin ladybirds are all strong examples. I just hope Aphalara itadori doesn't turn out to be as disastrous. 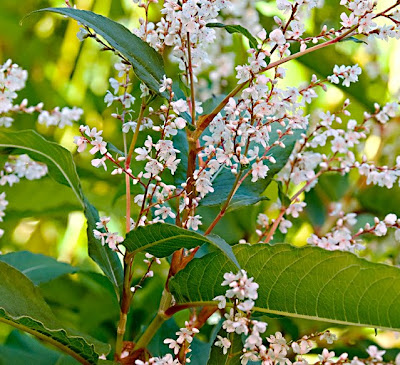 That knotweed again, Persicaria polymorpha, in close-up.
It's too pretty to lose and completely harmless.
I'm listening to Thomas 'Fats' Waller performing Your Feet's Too Big!
This day in 2006 I made a mini-pond with an old white Belfast sink and some rocks. Today, it has frogspawn - most of which I must remove so that the few tadpoles left behind have a chance of developing.
This week's film was Michael Haneke's superb Das weisse Band - Eine deutsche Kindergeschichte. (The White Ribbon.) Set in the last years before the Great War, this gave us a portrait of a near-feudal, German rural community following, in particular, the lives of the children. The oppression, at all levels, provided the driving energy for the narrative which unfolded amid enchanting scenery, all shot in black and white. The child actors were remarkable and the outcome not really as down beat as it could have been. An absolute masterpiece of cinema. Do watch it, if you haven't already seen it.
Auf wiedersehen
Posted by Plant Mad Nige at Thursday, March 25, 2010