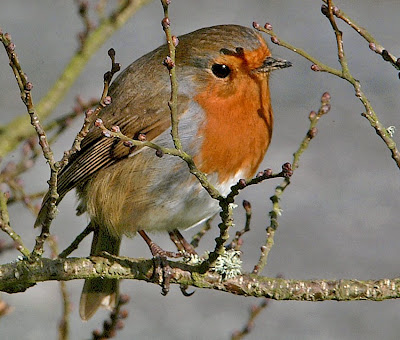 A robin, at the RHS Garden, Rosemoor, photographed a couple of years ago.  Robins are aggressive loners in the bird world, tolerating none of their kind anywhere near their territory, except for sex and breeding.  And yet they have been chosen to symbolise Christmas, the season of peace and goodwill among mankind.  A delicious irony!
It's been far too cold to garden lately - well, that's my excuse anyway.  So here's something different.
I love Marcus Brigstocke's satirical monologues.  Compared to his diatribes, the timid little rants posted on this blog from time to time  –  and flatteringly coined as 'colborning' by certain Award Winning Journalists – are but feeble milksoppery.  His railing about BT Broadband on BBC Radio 4's The Now Show, for instance, had me convulsed with an almost unendurable mixture of sympathy, hysterical laughter and blind rage.  I had been trying to get connected to broadband, via BT, at the time of the broadcast, so his piece struck a particular chord.  The BT connecting service was BAD BAD BAD in every possible way from start to finish.
But Mr Brigstocke's more recent rant made me blush. He was satirising not just the commercial tinsel and tat of Christmas - I think we all hate that - but also the nauseatingly cheap sentimentality that tends to go with this month of drinking, eating, skiving and other Yuletide jollies.  That felt like a personal dig, and I reacted like a small boy caught pinching sweets from the cupboard.  Let me explain:
I never fail to become infected by soppy sentimentality at Christmas. I've even been caught listening to Bing Crosby before the December dates move into double figures and worse, the other night, we watched that most drippy of films, Love, Actually.
It's an awful piece of cinematic drivel, but I absolutely adore every moment of it.  The plot - plot? Don't be ridiculous! - has everyone kissing and hugging and doing all sorts of warm, cuddly things together, 'cos it's Christmas.  The one saving grace, in this chocolate coated marshmallow of a movie is the Bill Nighy story strand.  He plays a superannuated rock star, ravaged by sex, drugs and bad music, but seeking a revival by converting one of his earlier songs into the cheeeeziest and most awful Christmas Pop Song possible.   It's so bad that it rockets to Number One, proving that popular taste will always go for rock bottom.  (And speaking of bottoms, Nighy vows to strip off to the buff, the 'full monty' if his number manages to top the charts.)
Over the next couple of weeks, I expect to be bathing in warm, treacly sentiment, Brigstocke notwithstanding.  And the seasonal goodwill thing really does work.  I found myself in the friendliest of conversations with a taxi driver, on Wednesday, when we discovered that we both had the same number of children and grandchildren at roughly similar ages and genders.  (Isn't that nice!) And that happened in London - surely one of the world's unfriendliest cities -  where, on the very same day, someone barged into me at Oxford Circus tube station, distracted by trying to speak on his mobile and eat a croissant at the same time, and then paused, looked me in the eye, smiled - yes, smiled! -  and said 'Whoops, sorry!' How rare is that?
So, for the next few days, at Chez Colborn we'll be getting immersed in some intensely warm and cuddly things.  We'll be watching several versions of Scrooge on DVD with the grandchildren, including the one made by the Muppets with Michael Caine!  It's easily the best and most intellectually stimulating.  Also on the DVD list are The Wizard of Oz, Miracle on 34th Street, Little Women, Polar Express - you know the sort of thing.
Gardening will be limited to picking a few bits of greenery and digging up a Nordman Fir, to put in our sitting room for the grandchildren to decorate, and then to wreck.  It's a tree I planted five years ago, but which is now in entirely the wrong place, ie, on the spot where the Colborn Greenhouse is to be built next year - unless credit crunch, banking incompetences and the limitations of old age intervene.
So, strictly no Bah Humbug, if you don't mind!  Kick off your inhibitions, rush out and hug someone today, even if it's only a tree!
I'm listening to Vaughan Williams' Fantasia on Christmas Carols.
Last night's film was Paris, Texas - Wim Wenders' masterpiece about breaking and mending human relationships, and about the intrinsic goodness in some people - but not the least bit sentimental.  The soundtrack, of Ry Cooder's slide guitar playing, is the most haunting and beautiful of almost any film made.
On this date in 2005, I was overhauling my elderly, but still serviceable Macintosh Powerbook Titanium laptop computer and re-installing its operating software, before giving it to my daughter.  And I see from my diary, that in the evening we watched - no, really, it's true - Love Actually!
Posted by Plant Mad Nige at Monday, December 15, 2008