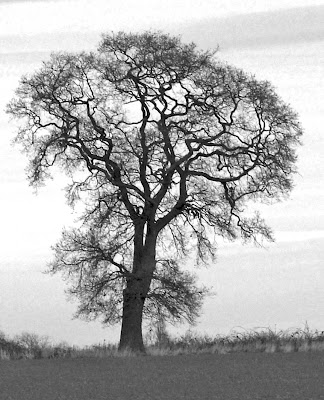 Winter Oak at Bourne Woods, Lincolnshre
Well that was a bit of a bummer!
Talk about a clap of vengeful thunder!   I never thought the Gentleman Upstairs, Intelligent Designer, Big G, or whoever – or whatever it is who organises the universe and things –  would give me quite such a smack in the chops for being somewhat irreverent with my last post.  OK! I'm sorry, I'm sorry!  I repent!  Mea culpa! I promise to try harder, and not to be so cynical this coming year.  Less colborning; more horticulture in the coming months, I promise!
My Granddaughter is only five but already a lover of plants and gardens.  In late 2006 she and I set some fuchsia cuttings together and later, she came back to pot her plant up and take it home.  Each time we spoke, after that, she told me that it had more and more flowers until, not surprisingly, it became easily the biggest and best fuchsia in the world.
Keep that image in your mind, if you kindly would! 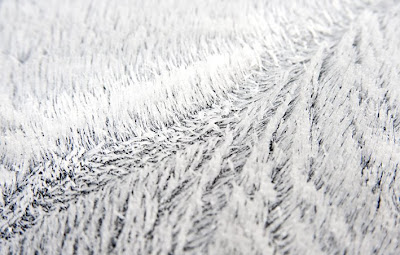 Frost on the car - it's much too cold to garden!
But for the moment, back to the bit about Divine Retribution.
It all began just after I'd popped the pictures into my last post around 21st December.  (I dare not mention the word 'Perisolstice' nor ever will again!)  I leapt up from my computer, in response to an uxorial order to get the hell out of my office and tart up for some forthcoming social jollies, and discovered that my head was spinning, and none too gently - a bit like that girl's in The Exorcist - and my legs had been transformed into damp cardboard which buckled under the weight.  And not a drop of festive punch or mulled wine yet touched!
By next morning, the 'flu had increased my age from sixty four– all right, nearly sixty five –  to about a hundred and four and the day after that, my wife got the 'flu as well.  Even our two cats turned morose and more sedentary than usual and the moment my beloved younger daughter jetted in from abroad for the festivities, she went down with it as well.  Bummer!
We had five more relatives due by 24th and although no one else succumbed, the poor loves must have felt they'd arrived at a field hospital.  Since my youngest granddaughter - hereinafter knicknamed 'The Buster' - is not 2 until next May, it was necessary to barricade all the fires, in case she decided to try 'doing a Brunnhilde' by hurling herself into the flames.  That meant that to refuel the big kitchen inglenook, I had to bend myself like a contortionist, over a caged construction which would accommodate an adult and hyperactive chimpanzee, while manoeuvring large hunks of seasoned ash wood onto the grate.
Now the joker who built that part of our house, back in the 18th century, certainly understood how to position beams, lintels and kingposts - but in those days everyone was about 4 feet high and I'm 6ft-2ins! The number of blows, to my already fevered head, while contorting myself to service the fires, was  therefore prodigious and I suspect, delayed my recovery.  I also tore some back muscles, when carrying a full basket of logs, and now walk with an disconcerting list to port as well as taking about five minutes to loosen up, whenever I've been sedentary for more than a few moments.  The Tin Man from Wizard of Oz is lissome and supple, in comparison!
And the final blow was a stiff email from a very close relative who I absolutely worship, telling me off for being far too cynical in this blog, particularly where farmers are concerned.  I will reform, I promise!
But my woes were nothing to those our my poor wife and hostess who had to keep rising from her sick bed to baste, roast, chop, peel, direct and of course, like the rest of us, run after The Buster, to rescue her from all manner of perils.  It is quite remarkable that someone a mere 19 months old can zoom about at such speed, and with such dogged determination.  And would it be sexist to say that 19 month-old girls are infinitely more ballsy than boys of the same age?
But back to the horticultural five-year-old.
By way of conversation, on Boxing Morning, and to try to take her mind off the preoccupations of the day - broken toys, missing batteries, the absence of more parcels to unwrap - I said:
'By the way, how's your fuchsia?'
'Dead, of course,' she responded, adding, 'it's winter, Grandpa.'
She returned her attention to one of a trio of little doll things she had been given, each with long, slinky, sexy legs, a bust and worrying hair, and seemed to be trying to dislocate its arm. Suddenly, in a solicitous but chillingly unnatural voice, the hideous mannikin breathed and said, in tinny accents that blended Connecticut with Hong Kong: 'Hi!  I'm your friend!'  How on earth could a rooted cutting of  Fuchsia magellanica 'Lady Bacon' compete with that?
Posted by Plant Mad Nige at Tuesday, December 30, 2008