BORDERING ON THE SUGARPLUM 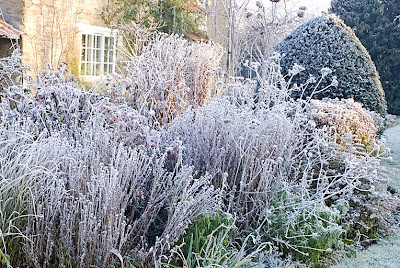 Our autumn border in frost.
Out on my bike this afternoon, after beating my head against the wall, trying to write a rushed piece all morning, I was enchanted to discover that ice was still covering the puddles.  What chilly joy!  What toe-tingling, ear-nipping, breath-steaming delight to have a December day that really feels like winter!  It almost enables you to forget climate change and think about chillblains and burst pipes.  (But I expect  you're all too young to remember those!)
You can't imagine what utter jolly delight it is, on your bike, to go whizzing  through frozen puddles, hearing a satisfying crunch.  Not only do have the spine-tingling naughtiness of smashing something beautiful, but you also know that no one else can do the same.  You've grabbed the puddle's cherry, as it were, and that's that.  All that remains are shards of muddy glass, littering the road.
Frost has been nicely timed, this year.  I got my dahlias lifted, at last, just before the promise of overnight temperatures below minus 5C - that's, erm, 23Fahrenheit for friends across the puddle.  (By the way, that's quite cold for England) - and managed to get part my cache of well rotted, friable compost barrowed and spread. 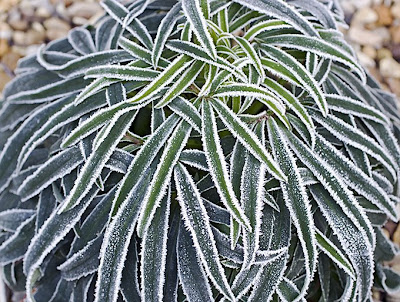 Helleborus foetidus
That, in itself, creates a dilemma of conscience and principle.  Let me explain.  For years, now, I've ranted and railed about the hateful habit of putting the autumn garden to bed by cutting everything herbaceous down to ground level.  It's a pernicious practice for a gamut of reasons: it reduces cover for wildlife; it cuts down the amount of feed available for seed-eating birds; it exposes the perennials to the full rigour of winter and, above all, a shorn border look miserable and depressing and unnatural and brown and dull and hateful.
So my borders tend to resemble the picture at the top of this post.  Hardly surprising since the picture is one of my borders!  And in frost, or snow they look lovely.  They don't look bad earlier in autumn, either, when the plants are gently subsiding into their annual Liebestod - if that's how you spell it. 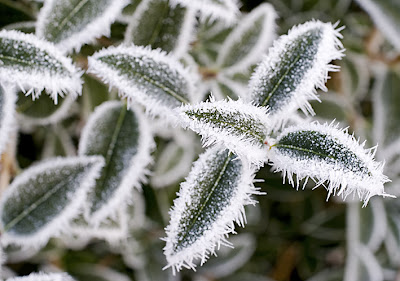 Osmanthus delavayi
But how the heck are you supposed to barrow heaps of compost among moribund perennials, or over them or between them without making a disgusting mess?  I've tried the discreet forkful here, handful there approach but that takes for ever.  In desperation, I've pushed wheelbarrows over and kicked the stuff about.  That, at least, gives one more exercise, but it doesn't get the good stuff spread. 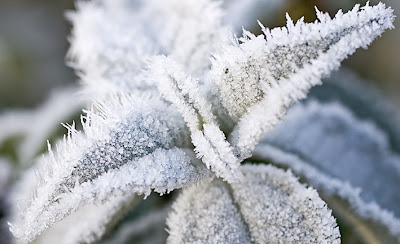 Buddleja 'Lochinch'
And another thing: what do you do about plants that get so wind-bashed or flop so much that they just look plug ugly?  The purist in my says 'watch, observe, rejoice in the decay, accept the entropy, the return to chaos.'  But the artist in me – no, that's bragging, I've as much artistic sense as funky gibbon –  the fragment of aesthetic sense which still lurks in my head says 'remove the offending limb for the good of the rest.'
Sorry, I'm writing even more nonsensical drivel than usual.  The pictures are frost on leaves or catkins - pictures of compost look horrible, however you dress them up. 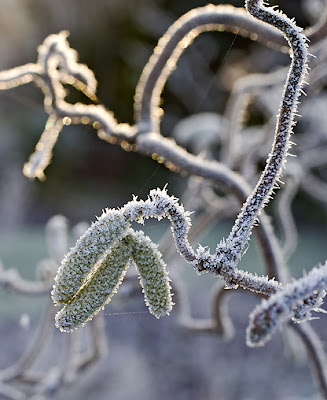 Corylus avellana 'Contorta'
This time last year I was - and do hope James doesn't resent me for scobbing his idea of doing this - I was watching the film Of Human Bondage with Leslie Howard and, for once in her acting life, a surprisingly wooden Bette Davis.  (It's  not good memory - I've just checked my diary.)
I'm listening to L'Enfance du Christ' by Berlioz.
Posted by Plant Mad Nige at Wednesday, December 10, 2008