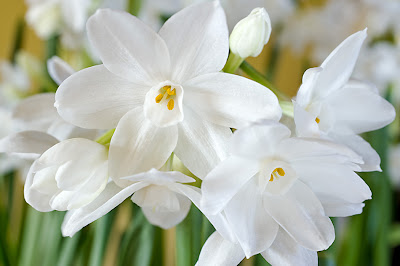 No ranting, I promise.  But a big swank instead:  I think I've just grown the fastest narcissus in the west!  Twenty three (23) days, from slightly wizened, dry bulbs, bought on impulse at a local garden centre to the pictures shown here.  It took even less time, only 21 days from scratch, for the first petals to unfurl.  (Yes, all right tepals, if you're a botano-pedant.)  Can anyone beat that?
There used to be a thing about getting bulbs to bloom for Christmas.  I can't imagine why, when windowsills are already burdened with cards, candles and tinselly things, that it should be de rigeur to add bowls of hyacinths to the clutter.  But it was, and when I was a boy, if my father couldn't get his first hyacinths to open and release their rather sickly scent, by the time the nervous little treble from Kings College, Cambridge was singing One in Royal David's City on the BBC Home Service at 3pm on Christmas Eve, he'd sulk until New Year's Eve.  Golly, that was a long sentence!  Isn't it simply divine, not having an editor to disapprove? 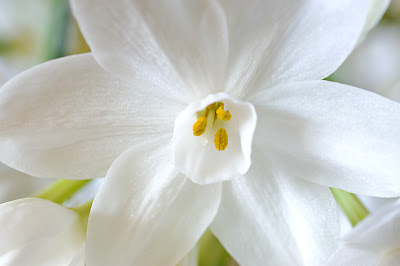 Narcissus papyraceus - the paperwhite narcissus - a native of southern Spain and
Gibraltar where I've seen it flowering in the wild.
I bought these bulbs –  Narcissus papyraceus  – on impulse when I called at our local garden centre for a bag of potting compost.  They looked miserable and shrivelled, in their little display pack, so I took 'em home and gave them the gravel treatment.
The procedure is so easy:  Take a chipped and rather ruinous salad bowl and partially fill it with gravel. 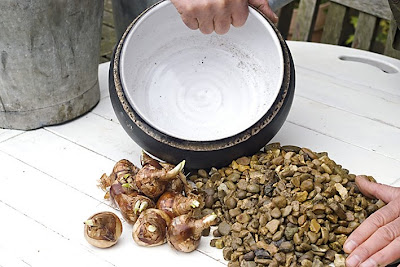 All you need: a knackered but watertight bowl or pot, gravel or shingle, bulbs, water and a bright windowsill. 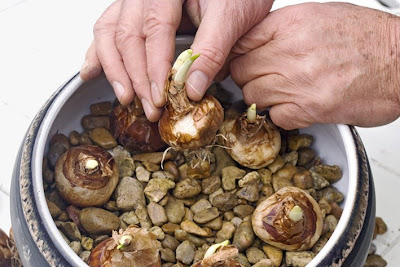 6th November.  Half fill the bowl with gravel and place bulbs gently onto surface. 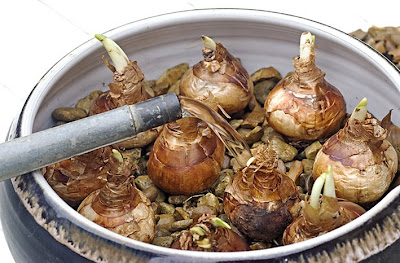 6th November.  Simply add water and keep the level to just beneath the bulbs. 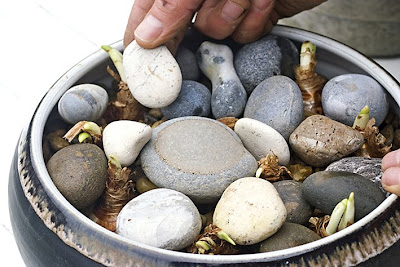 6th November.  Top with pretty pebbles, to decorate the surface - on loan from my fancy scree garden. 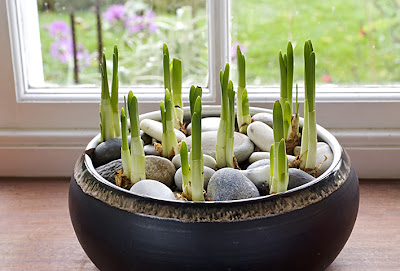 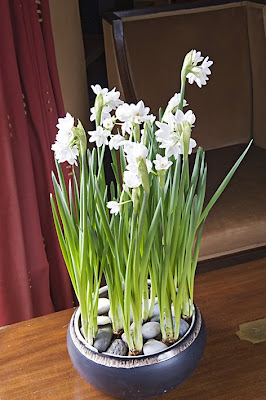 29th November - Twenty three days after planting, this is how they looked. 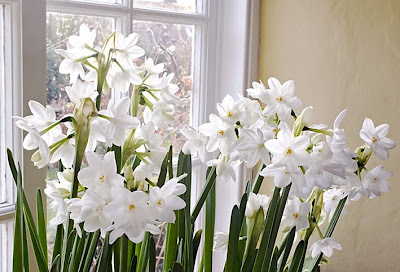 The pot at its best, just before the stems get weak, too long and begin to collapse!
It's all so simple!  No dark period, no special bulb compost - just bung 'em into a bowl with shingle and await the results. That must be as close to instant gardening as you can get.  But if anyone out there has got them to bloom faster, I'd love to know.
These are late-autumn bloomers, in their native Iberia, and are pretty closely related to N. tazetta.  Most of the commercial ones are from an improved stock with flowers larger and whiter than the wild species.  They're also intensely fragrant, but the perfume has rather excremental undertones.  I walked into the room where they grow, recently, when the door had been closed all day and thought one of the cats had got in and crapped on the carpet.  Isn't it odd, how odours can be vile or alluring, but have the thinnest dividing line between?  Good coffee can smell like crap, too, not to mention the best Havana cigars, but I adore the former and was once addicted to the latter.
This time last year, approximately - well, on 26th November - AWARD WINNING JOURNALIST James 'Le Chapeau' and I were playing to our largest audience - some 700 souls - with a Green with Envy show at the Princes Theatre Clacton.
I'm still listening to the boiler which is gurgling and hissing  along the lines of something written by Olivier Messiaen but is distinctly more melodious.
Posted by Plant Mad Nige at Wednesday, December 03, 2008

Email ThisBlogThis!Share to TwitterShare to FacebookShare to Pinterest
Labels: http://3.bp.blogspot.com/_d3hYM1l8N7I/STbDi_2TlgI/AAAAAAAAAKQ/CCMpGdxV3LE/s400/Papput.jpg